4:50 to Paddington by Agatha Christie 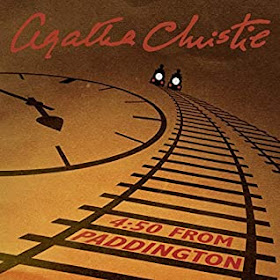 Who is your favorite audiobook narrator?  I have always loved Alison Larkin and enjoy her narration of classic stories such as the Jane Austen novels.  I also love Lorelei King and her excellent narration of the Stephanie Plum series.  I’m adding a new favorite narrator to my list, Emilia Fox.  To me, she will always be Georgiana Darcy from the 1995 Pride and Prejudice, but she has many other film credits to her name.  She is also an excellent voice actor.  Her narration for 4:50 to Paddington was excellent with different voices for each character and she acted out the story.  It made it a pleasure to listen to on my long car trip to Michigan.

4:50 to Paddington is the November selection for the #ReadChristie2022 Challenge.  The prompt is “a story featuring train travel.”  This is a Miss Marple Mystery and it’s original title in the United States was What Mrs. McGillicuddy Saw!

Elspeth McGrillicuddy is in a train watching out her window when a second train passes running parallel.  In the window she sees a man strangling a woman in the other train.  She is horrified and immediately reports it.  With no body, the authorities are sure that Mrs. McGillicuddy has imagined the event.  Troubled, she turns to her friend Miss Marple for help.  Miss Marple isn’t feeling well physically, but she is still able to use her smarts to determine what train the murder occurred and where the likely place was that the body would have been disposed of.  She also enlists her young friend, Lucy Eyelesbarrow to infiltrate the family where she believes the body was disposed of, Rutherford Hall.  The Crackenthorpe family is completed.  As the patriarch crankily rolls the roast, his children stand to inherit the estate and considerable money upon his death.  Once the body is found and a murder is confirmed, Miss Marple requests Inspector Craddock from Scotland Yard to assist in solving the murder.

I thought this mystery was inventive and delightful.  I did not guess the ending.  I like how Miss Marple was involved in the mystery from afar.  She was the brains behind the entire operation.  I love how she had to prove that a crime had even happened before working on who had committed it.  I also loved the characters, in particular Lucy Eyelesbarrow.  I like that she had a romance of her own in the story.

“The truth is people are an extraordinary mixture of heroism and cowardice.”