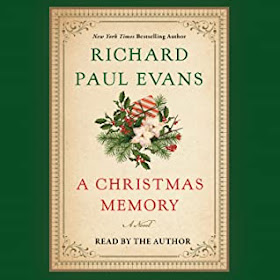 What is a Christmas memory that you’ve kept with you through the years?

A Christmas Memory by Richard Paul Evans is a heart rending tale of loss, forgiveness, and grief set at the Christmas season in 1967.  You definitely need to have your hankies ready for this book.

I listen to Richard Paul Evans audiobooks every year for Christmas.  It’s not Christmas without one of his stories.  A Christmas Memory is a different kind of book than his usual tales.  It’s different as it tells a fictionalized version of events that happened to the author in his youth.  It was also narrated by the author, which I really enjoyed.

In 1967, young Ricky’s beloved older brother Mark was killed in Vietnam that fall.  After Mark’s death, Ricky’s family fell apart.  His father lost his job and they moved from California to Utah to his grandmother’s old abandoned house.  His parents separate and Ricky has a very hard time at his new school.  Ricky’s one bright spot in life is his neighbor’s dog, that he affectionately names Beau (after Beau Brummel).  He eventually meets Beau’s owner, Mr. Foster. It turns out Beau’s real name is Gollum.  Mr. Foster loves to read and named him after the Lord of the Rings character as the dog is his “precious.”  That made me laugh out loud.  Mr. Foster and Beau become Ricky’s only friends.  But as Ricky’s world continues to fall apart, what lesson does Mr. Foster have for him to can help pull him back from the brink?

A Christmas Memory was a very touching story.  I loved how it really showed how friendships can be important and how you can make a difference in someone’s life who is having a hard time.  It also shows the importance of family and how grief can impact everyone differently.  I also really liked how the story gave the feel and time of the 1960s and a Christmas during that time period.  There is a lot of sadness in this story, but overall, I found it to be inspirational.

I highly recommend A Christmas Memory.