Talk Santa to Me by Linda Urban 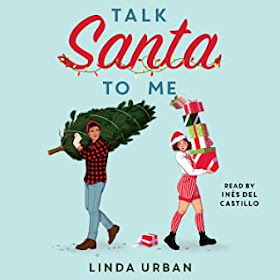 Title:  Talk Santa to Me

Frankincense “Francie” was literally born in a stable at her family’s Hollydale Holiday Shop in northern Indiana.  After her beloved Grandpa’s death, Francie’s Aunt Carole has returned to town.  She is trying to improve the shop by targeting Grandpa’s Santa School and bringing in Hollywood flair.  Francie is not pleased with these changes and also is not pleased that Aunt Carole has made her work environment impossible with all of the crazy costumes she forces Francie to wear.  How will Francie save the shop and the Santa school?  She has also stepped in to help her father on a local cable show and has become known as Santa’s intern.  As letters flood in, will she be able to answer them all before Christmas?  Will the cute boy, Hector, working at the Christmas tree farm next door ever notice her?

I loved the upper Midwest feel to this novel and I was actually surprised tor realize it was set in Indiana.  I was thinking it was Minnesota or Wisconsin.  Part of the teenage protagonist’s angst is that she has attended Catholic school her entire life, but she has now started to go to public school.  Her best friend is still at the Catholic school, which makes her sad.  There is also a hockey team and hockey seems to be huge in this school.  Poor Francie is known as a “bad kisser” after an unfortunate incident with a boy from the hockey team and is teased constantly about it.  Her angst about this also seemed real and trying to figure out how to move forward from it.  Although this novel was emersed in the Christmas spirt, Francie’s teen problems seemed relevant and real.  I thought the story was a lot of fun.

The story also brought in some sad experiences as it dealt with Francie’s Grandpa’s death and how it affected her.   I thought it took a good and honest look at grief.

This was overall a clean young adult read.  I liked the romance between Francie and Hector.  They were both great characters.

Ines del Castillo was a fun narrator of this audiobook and I thought she did a great job of capturing Francie’s voice.