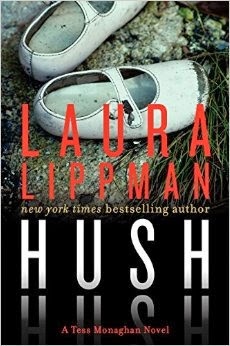 A baby left in a car on a hot summer day while her mother sits nearby gazing into the water, everyone has a theory on what happened the day that Melisandre Dawes left her baby in her car to die.  Was she crazy?  Suffering from postpartum depression?  Was she going to kill her other two girls as well?  Was she pure evil?  Melisandre was found not guilty by reason of insanity and has come back now ten years later to reconnect with her other two daughters.  She has also hired someone to film this reunion as a documentary.  Detective Tess Monaghan is hired to protect Melisandre and she discovers that there is much more to the story than meets the eye.

Over the past few years, Laura Lippman has become one of my favorite authors.  She writes intriguing mysteries that involve real world characters that could be my family, friends, or neighbors.  One of the best parts of Hush Hush to me was that Tess is a busy mother of young Carla Scout and is doubting her own parenting skills.  Dealing with Melisandre and her mothering skills and problems makes Tess take a look at her own relationship with her daughter.  Tess also finds herself pretty much never seeing Crow, her fiancé, as they are continually switching off work and care of their daughter.  Will they ever find the time to marry?  When will life stop being so busy?

Overall, this is another fantastic novel by Laura Lippman.  I’ve read a couple that have involved Tess Monaghan, but have not read the entire backlog.  This book works well as a stand-alone novel or as a continuous story of Tess.  One thing I really love about Tess is that she grows and changes with time. She is not a cookie cutter detective with no personal growth.  I still need to go back to book one, Baltimore Blues and start my journey with her!  I feel like I’m holding back as it’s always nice to think that there are Laura Lippman books out there still for me to discover.

William Morrow also has a fantastic website at this link which has all sorts of great background on different characters in the novel as well as maps.  Baltimore itself is a wonderful setting and seems to be a character of its own in Lippman’s novels.

Sun and Moon, Ice and Snow by Jessica Day George 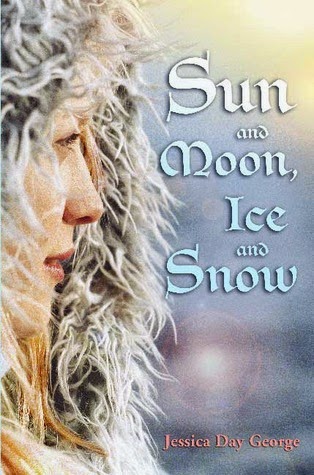 A simple woodcutter’s daughter, known as “the lass,” possess the gift to speak with animals after a mysterious meeting with a white reindeer.  She later meets a great white bear, known as an isbjorn, and agrees to go with him to a mysterious castle for a year in order to bring wealth to her family.  Accompanied by her faithful wolf, Rollo, the lass tries to determine the mystery behind the castle, the servants, and most of all, the mysterious person who sleeps beside her each night.  One day her curiosity goes too far and she has to find the courage to rescue her one true love.

Sun and Moon, Ice and Snow is based off of the Nordic fairy tale, East of the Sun, West of the Moon.  I am a great lover of fairy tales, but I somehow missed this one.  I thought the story has many elements of other fairy tales such as "Beauty and the Beast" and most of all the myth of “Cupid and Psyche.”  It’s funny how such tales were in so many cultures with slightly different twists.

The boys originally received this book from the library to read for their Youth Book Club.  Kile is 9 and in third grade and Daniel is 6 in first grade.  Kile read about half of the book to Daniel, but it is a young adult book and ahead of where he is in his reading level.  He did a good job of it and was interested by the story, but it was slow reading.  I read the rest myself as I wanted to know what happened. For me it was a fast and enjoyable read.  I especially recommend it to anyone who loves fairy tales.

The King’s Curse by Philippa Gregory 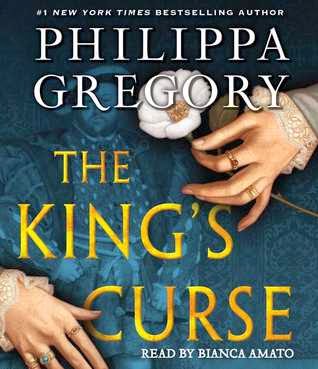 The King’s Curse is the story of Margaret Pole, one of the last York heirs and her life through the reign of Henry VII and Henry VIII.  I knew how this story would end through knowing the history of the time, but that only increased the impact of the story to me.  To follow Margaret’s life, her struggles and triumphs, and her ultimate end was very powerful.  It told much more about Henry VIII than just a biography of the man.

Margaret is the niece of two kings and the cousin of the current queen, Elizabeth of York.  Unfortunately the power behind the throne, the King’s mother Margaret Beaufort, makes sure that Margaret Pole does not gain a high position.  After Margaret’s husband’s death, she finds herself struggling to support herself and her family.  She basically has to send most of her sons away as squires and one, Reginald, becomes part of a monastery as a young boy.  Margaret’s fortunes change with Elizabeth’s young son Henry VIII becomes king.  An exuberant king, he gives Margaret back her ancestral lands and she is a Countess in her own right.  With young Reginald now in Europe under Henry’s patronage and her other sons as landed nobles and firm friends of the King, life is good.  Margaret is good friends with Henry’s Queen Catherine and becomes Princess Mary’s governess.

Margaret also unfortunately knows a curse that her cousin Elizabeth of York put on the line that killed her two young brothers in the tower.  Elizabeth fears that this curse may be on her own line if her husband Henry was the culprit.  Margaret knows that she must never mention this curse and with a father and brother that were both killed for their family name, she must do everything to remain hidden and within King Henry’s good graces.  When fortunes change for Queen Catherine and Princess Mary, Margaret cannot put her friends aside and she is made to pay for this.  As King Henry sinks into tyranny, it seems that there is no safe place to hide.  Will Margaret and her family find a way to survive and keep their souls?

I highly enjoyed this book.  Margaret came across sometimes in the beginning as a little too proud of her royal blood.  By the end, she has realized that her husband had done her a lot of good by helping to hid it and her Plantagenet name.  The most moving part of the book for me is when she had to leave young Reginald behind at a monastery and he was only six years old.  That is the same age as my middle son and it brought a tear to my eye.

I found this book very interesting to listen to.  Bianca Amato had an interesting British accent and was the voice of Margaret.  I loved Margaret’s unique story and also how intertwined it was with the story of Henry VIII.  Seeing Henry’s wives, friends, and trusted advisors all find their way to the block was very disturbing.  It was almost as if once finding just how much power he could weld and meeting no resistance, Henry just kept sinking further into the role of despot.  Margaret and her family were just one more piece in Henry’s way.

Overall, The King's Curse was a good book with a unique look at Margaret Pole and Tudor history.  I highly recommend it!
Posted by Laura's Reviews at 3:14:00 PM 2 comments: