Warriors: Into the Wild by Erin Hunter 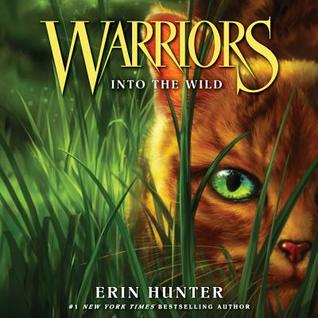 My fourteen-year-old son, Kile, has been obsessed with the Warrior series for the past four years.  Years ago, I read the first two books and enjoyed them.  When I heard there was now an audiobook version, I thought this would be a good audiobook to listen to on a family trip.  Kile was very happy to listen to the audiobook and share the story with his family.

Rusty is a housecat who longs for something more.  He discovers wild cats in the wood outside of his home and joins their clan, renamed Firepaw.  He learns the way of the clan and soon figures out that there is a threat to the clan from within.  Will Firepaw be able to save his clan?

My fourteen and twelve-year-old sons were into the story, but my 9-year-old daughter was not captivated by it.  She listened to it at times, but it did not capture her imagination.  Kile and I both agreed that we preferred reading the book rather than listening to it, but it was interesting.  Warning, there is cat violence and death in this book which would make it not for younger listeners.

The narrator did a good job of having a different voice for each of the characters.  The way he interpreted the characters kept us very entertained on the journey.

Overall, Warriors: Into the Wild is an action adventure that entertained our family on a recent trip.  The narrator had great voices for the characters.
Posted by Laura's Reviews at 9:30:00 PM No comments: 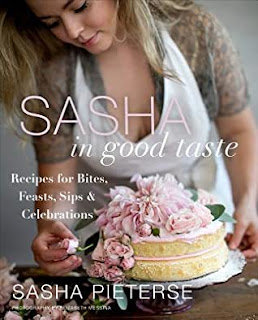 I love cookbooks and have a nice collection of them.  My very first cookbook was a Betty Crocker cookbook that my Dad gave me when I was 18.  I’ve received and collected many cookbooks since then and love to try out new recipes. My kids are in on the act now too and pick out recipes to try as well.  I’ve been using this to get the kids to try new things.  When they pick it out and cook (or help to cook it) they want to try it out. My fourteen-year-old son has become quite the baker.

Sasha in Good Taste is a beautiful book that looks like the pictures are set for Instagram.  The book is split into the following chapters:  But Why, Though, Savory, Sweet, Sips, Party Prep, It’s all in the Details, and Party Prep.  This book is mostly about entertaining guests.  In the “But Why, Though” section, I figured out that Sasha was an actress on Pretty Little Liars, she’s lived all over the world, she likes to eat healthy, and entertain.  The book has a lot of pictures with interesting ways to decorate and to set up snacks for guests.  The pictures were fun to look at. 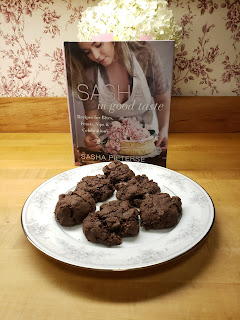 The book was light on actual recipes.  The kids and I looked through it to pick out some recipes to make.  I also looked through the alcoholic drinks with my husband to pick out a few to try.  Unfortunately, many of the recipes had ingredients that were not available where we live without driving to a specialty store in a larger town (lavender extract, elderflower liquor, pink Himalayan sea salt).  We didn’t try out those recipes.  We decided to try the “Dirty Diana” chocolate cookies.  My 14-year-old son also made his favorite chocolate cookies so we could compare.  The Dirty Diana cookies lost the cookie battle and were just okay. The recipe had cane sugar in it, and it was large and crunchy even after cooking.  I pulled them out as directed before they were all of the way done, but they were still dry.  I had added a bit of water to the dough to help with the lack of liquid before I cooked them as well as they were too dry to shape.  I think more eggs or addition of milk or water was needed for the recipe.  I could make the cookies taste better with some tinkering on the recipe, but we will probably just stick to my son’s recipe.

Overall, the pictures and ideas for setting up a party were excellent, but the recipes were sparse and needed hard to find ingredients.  The one recipe we tried out was lackluster.

Olympic Pride, American Prejudice: The Untold Story of 18 African Americans Who Defied Jim Crow and Adolph Hitler to Compete in the 1936 Berlin Olympics by Deborah Riley Draper and Travis Thrasher 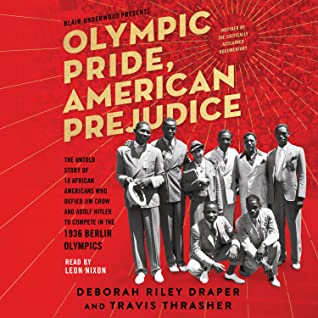 I learned so much in this book.  I was particularly intrigued by Ralph Metcalfe.  He was a sprinter in both the 1932 and 1936 games and later became a politician in Chicago and helped to pass the bill for Black History month.  He was also a helpful older statesman to many of the younger Olympians in 1936 and won the gold medal for the 400-meter relay team that year.  He also attended Marquette University in Milwaukee, Wisconsin.  I took a few graduate classes there myself and had no idea about this history.  It was so interesting.

I also learned that Jackie Robinson has an older brother, Mack, that was a famous Olympian himself.  Mack was a super sprinter that broke the world record for the 200-meter dash at the 1936 Olympics but was still behind Jesse Owens.  The book had a sad line that he was overshadowed by Jesse Owens at the Olympics and by his older brother later in life.  After returning to the US, he had a hard time finding a job and ended up sweeping the streets in his Olympian jacket.

Tidye Pickett and Louise Stokes were the first two African American women to win a spot at the Olympics.  Unfortunately, in both 1932 and 1936 they were robbed at their chances to compete.  Tidye Pickett did compete in 1936 but broke her leg during the hurdles and was unable to finish.  After hearing their story, I can’t think of Babe Dietrich in the same way again.

Archie Williams won the 400-meter dash in the 1936 Olympics, but his real dream was to be mechanical engineer.  He was discouraged from picking this major as they told him he would not get a job in the field as an African American.  They were unfortunately correct, but he went on to get a pilot’s license and became a distinguished pilot.  I was really angry about how he was unable to get a job in a field that he loved and was good at due to his race.

I loved track in my younger years and was a sprinter.  I loved reading about sprinters and runners in this Olympics.  I loved their individual stories and how together they were able to prove Hitler’s racial theories as wrong.  I was sad though that as African Americans, they were not treated better in their own homeland.  One positive though is that what they showed the world helped to lead to the civil rights movement in the United States.

Narrator Leon Nixon had a deep and wonderful voice for narration.  I loved listening to this audiobook.

I somehow missed that this was a documentary that came out a couple of years ago.  I watched it on Amazon Prime and I really liked seeing the faces of the people I had read about in the audiobook.

Overall, Olympic Pride, American Prejudice is an important part of our American History and a fascinating look at the 1936 team.
Posted by Laura's Reviews at 2:58:00 PM 2 comments: