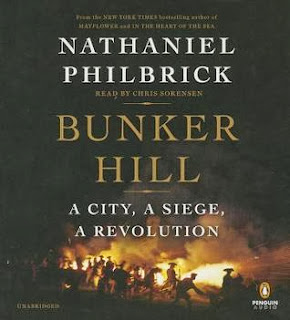 Nathaniel Philbrick is a wonderful writer of history.  I greatly enjoyed his non-fiction book, Mayflower, and was more than a little excited to receive the audiobook of Bunker Hill to review from Penguin Audio.

Bunker Hill is a battle that every American school child is taught as a major battle of the Revolutionary War, but besides the fact that it was fought near Boston I didn’t know much about it.  I did know that America lost the battle, but that the colonists lost far few men than the British had to lose to make the victory possible.

Bunker Hill tells of the events leading up to the battle that actually took place on Breed’s Hill, not Bunker Hill.  From the fiery personalities involved on both sides, to the aftermath and its place in helping to secure the overall American victory, I found this book to be riveting.  I especially loved learning about General Joseph Warren.  He was a fascinating part of our history and it is interesting to wonder what would have happened if he would have lived.  I also loved learning that like most of our early heroes, he had his strengths and his weaknesses.

The most surreal moment of the book for me was when British General Howe was leading his troops up to the colonists’ fortifications on Breed’s Hill and he had a servant with him carrying champagne.  All I can say is, “wow.”  That is a totally different view of battle than I can ever imagine happening.  Also when Howe actually made it to the fort and realized he was the only officer that had made it there alive; it was a fantastic moment of the book.

I also loved how the story was bookended by John Quincy Adams.  Joseph Warren was a doctor and had repaired young Quincy Adams’s hand.  He and his mother Abigail had watched the battle from his home and it was a moment that deeply disturbed him.  At the end of the story as an old man, he still would not participate in any commemorations for the battle.

Chris Sorensen was a fantastic narrator.  His voice truthfully reminded me of Tom Hanks.  It was a great voice to listen to and was quite expressive while reading this book.

Overall, Bunker Hill is a fascinating look into our history and is not to be missed!
Posted by Laura's Reviews at 2:51:00 PM 7 comments:

Sense and Sensibility by Joanna Trollope 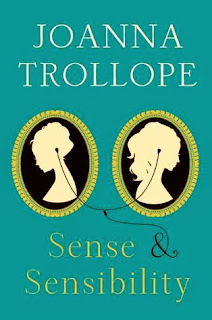 Jane Austen’s novels are all getting an update as part of the Austen project.  Joanna Trollope has started this project with a new update of Sense and Sensibility.  The story is the same as Austen’s, but now set in modern times.  Henry Dashwood has his tragic early death at the beginning of the novel, but he was not technically married to Mrs. Dashwood and the estate was left to the Dashwood girls’ half-brother, John.

Marianne is now a young asthmatic girl who falls madly in love with John Willoughby.  Poor Elinor is the only one trying to keep everything together.  She can’t finish her architecture degree, but does get a job with the help of Colonel Brandon to help support her family.

The most interesting part of the novel to me was seeing my favorite characters in a modern light.  Marianne seems so rude and ungrateful, making fun of pretty much everyone in the novel.  She did this in the original, and somehow I didn’t think much of it.  Now she just seems really rude and spoiled to me.  In a modern light, the ladies (besides Elinor) seem rather thoughtless, especially when they can’t get their act together and help Elinor support them.  Particularly Bella Dashwood.

One interesting aspect for me is that I’m currently listening to The Real Jane Austen:  A Life in Small Things by Paula Byrne.  Byrne goes into detail about the Sensibility movement during the Georgian Period of Austen’s lifetime.  In that period of time, people loved melodrama, but there was also perhaps a mental illness side of the melodrama.  Did Marianne suffer from Manic-Depression?  It is interesting to think and seemed very applicable to this novel.

Bill (Colonel) Brandon comes off as such a great character in this book, but Ed (Edward) is a bit of a wet noodle.  I loved Trollope’s ending of the book.  It was unique and different, and fantastic!

Overall, I loved this book and sped through it.  I will definitely be reading the rest of the series.

Bridget Jones: Mad About the Boy by Helen Fielding 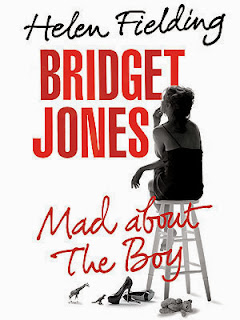 I preordered Mad About the Boy long before I heard the tragic news about Mark Darcy.  When the book came, I devoured it over the course of the first weekend it was in my possession.  I enjoyed it immensely.

Bridget is now a 51 year old widow.  After the tragic death of her beloved husband, Mark Darcy, Bridget is left alone to raise her two very young children.  Bridget is flustered as only Bridget could be, but she makes the best of it.  The novel starts five years after this tragic death with Bridget’s posse of friends (Tom, Jude, and Shaz) trying to get her out and about in the dating world again.  Bridget goes on a weight loss regime and also tries to learn about the world of social media by starting a twitter account.  She goes back to work by writing a novel as she has always wanted to do.

Before Bridget knows it, she is dating Roxster, an attractive man twelve years her junior.  Bridget’s friends can’t believe her good luck and he is a nice guy, but is he the right man for her?

I’ll admit, I was as shell shocked as everyone learning before the novel came out that it was going to be about a widowed Bridget.  Mark Darcy dead, it can’t be!  I thought the novel was great though.  It respected the love and time that the two had together and was more about the journey of Bridget trying to find her self-confidence and way in a world without Mark.  While Bridget has matured and is now a mother, she is still the same old Bridget with her foibles and keen observations on modern life.  It made me laugh out loud several times.  I enjoyed the novel and really hope that they make a movie out of it.

I must say I also enjoyed it so much more than the Bridget Jones addition that Helen Fielding had published in a British newspaper a few years ago.  I really disliked this piece that had Bridget still trying to decide between Mark Darcy and Daniel and ultimately having a baby with . . . Daniel.  Ugh.  I loved how in Mad About the Boy, Bridget did chose Darcy; and she has moved on with life and grown as a person.  It is so much more realistic as compared to other series of books where the heroine is caught forever in a love triangle never changing.  Bridget may be older than me (She’s 51 and I’m 35), but with her small children (late in life babies) she still has a lot in common with me on the parenting front.

Overall Mad About the Boy is a great addition to the Bridget Jones series and highly enjoyable.  I hope that Fielding writes about Bridget again five or ten years in the future!

Book Source:  I preordered this book on Amazon.com
Posted by Laura's Reviews at 12:53:00 PM 2 comments: 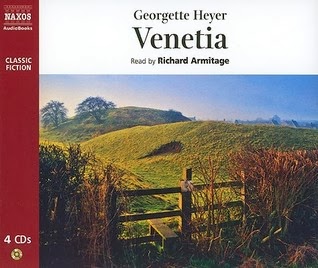 I loved Venetia.  Venetia is a spirited heroine who lives out in the country taking care of her younger brother and waiting for her elder brother’s return from the continent.  She is beautiful and spirited, but living in limited circles, has been unable to find a suitor.  One day the mysterious and handsome Lord Damerel returns to his nearby estate.  The two meet and instant sparks fly.  Lord Damerel has a scandalous past, but Venetia doesn’t care a whit for it.  After her older brother’s new wife returns and takes over care of the estate, Venetia finally gets a chance to go to London and experience society.  She also plans a way to make Lord Damerel forget his past and move on to a future, with her.

I loved Richard Armitage’s narration.  I could listen to it all day long.  And even better, he would make the perfect Lord Damerel in a Hollywood version of this novel.  Please Hollywood – it would be wonderful!
Posted by Laura's Reviews at 12:44:00 PM 6 comments: 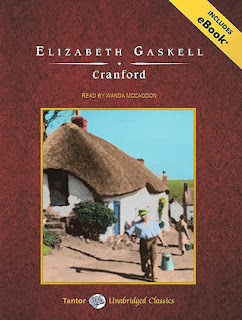 I read Cranford several years ago when the mini-series was first broadcast on PBS.  I enjoyed Elizabeth Gaskell’s series of vignettes of a small 19th century village dominated mostly be older ladies.  In particular Miss Deborah Jenkyns and her sister, Miss Matty and their group of friends are all wonderful characters.  Miss Mary Smith is the narrator of the novel and her narration makes it transfer wonderfully to an audiobook version. I downloaded this audiobook from my library and enjoyed listening to it as I went about my daily chores.  It is a great novel for that, comforting, yet enjoyable.

Wanda MacCaddon was a wonderful narrator and I enjoyed her British accent.  I only wish that the story of Cranford was longer!  Overall, Cranford is a great introduction to Gaskell and to live in a small English village during the Victorian era.  I highly recommend it.
Posted by Laura's Reviews at 12:39:00 PM 2 comments: