In the Unlikely Event by Judy Blume 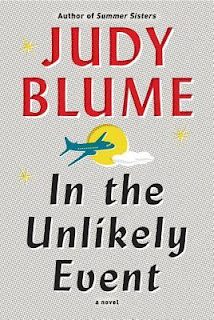 As well as being a novel that brings one into American life in the 1950’s and the tragic events of the three airplane crashes in Elizabeth, New Jersey, Blume spins her magic in this novel and tells the story of the coming of age of the teenage characters.  The crashing of the planes also symbolizes the taking off of the rose colored glasses of the teenage characters to discover that their world is not all it seems with parental affairs, divorce, and first love gone wrong.

In the Unlikely Event is set primary in 1951 to 1952.  Miri lives in a three-generational home with her mother Rusty, Grandmother Irene, and Uncle Henry.   She wonders who her father was, but her mother won’t tell her.  Her best friend is Natalie who lives a luxurious life as daughter of Doctor Osner, the dentist.  Miri also meets the mysterious Mason at Natalie’s house, the friend of Natalie’s brother and discovers first love.  After the first plane falls everyone’s world starts to change.  As the planes keep falling, fear falls over the town.  Is it a conspiracy?  Who will be next to die as a plan falls from the sky? On the home front, will Miri find her father?  Will Mason be her one true love?

The story is told through a variety of characters in different sections.  Sometimes the characters only told one section.  I found this hard to focus at first as there were so many characters.   I got used to it and enjoyed the many points of view as I kept reading the novel.  Although I did start to get nervous when new characters got introduced and realized they could be potential victims for the next crash.
I enjoyed the story.  I loved how the real history was woven throughout the coming of age tale.  I loved the detail of the live in the 1950’s.  I was devastated as I got to know characters and their lives came to an abrupt end due to these freak crashes.  This novel was the February FLICKS Book and Movie Club pick (aka Rogue Book Club). None of us sadly had finished the book on time, but what we had finished prompted good discussion.  I loved Judy Blume’s novels when I was younger, but this was the first “adult” book I read by her.  She is a truly wonderful novelist.

I love this exchange between Mom, Grandma, and Daughter:

“For god’s sake,” Rusty said to Irene later.  “She’s not getting married.  She’s in ninth grade.”

This poignant scene brought tears to my eyes:
“He visited the cemetery every day to talk to Estelle, to apologize for the things he’d done, to tell her she’d been his one and only love.  If I could do it over. ..  he’d cry.  Please, Stellie, give me another chance to prove how much I love you.  But Estelle never responded.  He stood alone as the winter wind whipped his hat off his head, hoping for a sign – a falling leaf, a dove flying by.  He’d have settled for a pigeon.  But there was nothing.  This is why he cried.”

This made me chuckle:
“Then they married each other and lived in single family houses with big backyards, had chubby babies and drank themselves to death.  Miri knew the part about drinking themselves to death wasn’t necessarily true.  She was just trying it out to make their lives seem less perfect.”

This was a disturbing scene from history that seems all too relevant today:
“(Senator Joseph) McCarthy in his typical wild swinging fashion, with no regard for facts but with a hold on is audience that is frightening, called Sun publisher Hank Greenspun an ‘ex-convict’ and an admitted Communist, publisher of the Las Vegas ‘Daily Worker.’”

A great overall summary of the novel:
“Life is a series of unlikely events, isn’t it?  Hers certainly was.  One unlikely event after another, adding up to a rich, complicated whole.  And who knows what’s still to come?”

Overall, In the Unlikely Event was a unique and riveting look at a true historical event and the ripple effects it had on the community.

Have you read any Judy Blume novels?  If so, which one is your favorite?

I hadn’t read Henry Huggins since I was young so I was delighted that it was the February Kewaunee Library Youth book club pick.  I read it in the evenings with Daniel.  Daniel (8 years old, in 3rd grade) was a bit grumpy reading it as it took away from his Harry Potter time, but Henry Huggins managed to wring a few chuckles from him as well.

Henry Huggins is basically a series of scrapes that young Henry finds himself in.  Each chapter is like its own short story.  The book starts with Henry finding a dog downtown, Ribsby, and trying to figure out how to get it home so he can keep him.  It is an amusing tale.

One thing that amazed me as we read the book was Henry’s freedom around town.  He’s eight years old by himself downtown taking City buses home.  I looked up when it was published and it was the 1950’s.  It’s hard to imagine now letting your child go downtown at that age by themselves on a city bus.  Is this a good or a bad thing?

Overall, I enjoyed the stories of Henry’s life and loved the 1950’s setting.  I thought it was humorous.  I remember as a kid I enjoyed the rest of the books in this series too.  Daniel was not as fond of it as myself as it was not Harry Potter.  I highly recommend it for anyone looking for an entertaining and funny middle grade reader.

Did you read any Beverly Cleary books as a kid?  If so, what were your favorites? 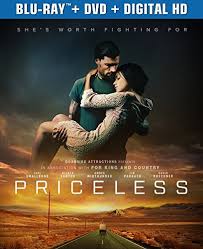 The lucky winner of the Priceless Blu-Ray + DVD + Digital HD is Susan from Suko's Notebook.  Suko's Notebook is one of my favorite blogs.  Check it out if you haven't read it already!  Susan has been notified via email and has one week to respond to the email.  She was chosen as a winner using random.org.

Thank-you to Icon Media Group for allowing me to host this giveaway and thank-you to all who entered the giveaway!

Curious about Priceless?  Check out my review here.
Posted by Laura's Reviews at 9:17:00 PM 1 comment:

Pride and Prejudice with Songs from Regency England by Jane Austen, Read by Alison Larkin 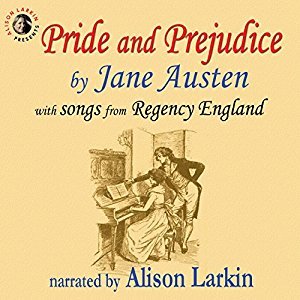 A perfect book for the Valentine’s Day holiday this month, Pride and Prejudice is one of the most romantic novels that have ever been written.  What a delight it has been to listen to the audiobook version of Pride and Prejudice by Jane Austen wonderfully narrated by Alison Larkin.  It made my daily commute much more enjoyable.  Alison Larkin has a perfect voice for narration and had unique “voices” for the individual characters.  As I’ve said in other reviews of audiobooks of Austen’s novels, I feel they translate particularly well to the audiobook format as Austen would read them herself to her family and I feel they were written to be read aloud.  I enjoyed the piano music between each chapter.

My favorite part of this audiobook version was actually the regency songs at the end.  Alison Larkin sang four regency era songs and had them in a scene where Mr. Darcy and others are listening to the singing. It was magnificent and humorous at the same time.  I could listen to an entire CD of Alison Larkin singing regency era songs.  They were beautiful.

Why is Pride and Prejudice such a romantic novel?  I think it is because of the unique relationship between Mr. Darcy and Elizabeth.  They don’t both meet, fall in love, and ride off into the sunset together.  Mr. Darcy insults Elizabeth’s looks and his snobby behavior infuriates her.  She is afterwards willing and able to believe the worst of him including any and all malicious rumors. As Darcy gets to know Elizabeth better, her sense of humor, and no nonsense observations on life attract him.  She is unlike any other woman he has known, she is not afraid to tell him exactly what she thinks.  Which is what she does when he proposes and she refuses.  Things seem at an end until Elizabeth visits Pemberley with her Aunt and Uncle.  She meets Darcy again and he has changed the way he treats everyone.  Elizabeth also sees how he treats the staff and his sister and is impressed by his goodness.  I believe it is because Elizabeth and Darcy have to work through their first misunderstandings to find true love that makes this such a romantic novel?  What do you think?  I also think watching Colin Firth as Darcy in a wet shirt in the 1995 mini-series helps to make this a romantic classic.

I was struck again while listening to this audiobook on how financial stability is one of the driving forces of the novel.  Who has what living or money is the talk of everyone in the novel  With Longbourn entailed away to Mr. Collins, Mrs. Bennet has a real concern that if Mr. Bennet dies, she and her daughters will have no way to support themselves.  I like when in the novel, Mr. Bennet reflects on how the only money they will have is what Mrs. Bennet brought to the marriage and that he probably should have been saving money all along.  He then shrugs it off and thinks it’s too late now.  That is why my British novel instructor in college said that Mr. Bennet is the real villain and Mrs. Bennet is the real heroine when you look beyond the comedy of the novel.  Elizabeth Bennet holds out for love, but her friend Charlotte is more practical and marries Mr. Collins knowing that their marriage will provide a secure future for herself.

“For what do we live, but to make sport for our neighbors, and laugh at them in our turn?”

“You must allow me to tell you how ardently I admire and love you.”

“She is tolerable, but not handsome enough to tempt me, and I am in no humor at present to give consequence to young ladies who are slighted by other men.”

“They walked on, without knowing in what direction. There was too much to be thought, and felt, and said, for attention to any other objects.”

“How little of permanent happiness could belong to a couple who were only brought together because their passions were stronger than their virtue.”

Overall, Pride and Prejudice with Songs from Regency England by Jane Austen and read by Alison Larkin is a beautiful version of one of my favorite books.  Alison Larkin is a wonderful narrator and I love the unique rendition of the regency songs at the end of this audiobook.  It’s a perfect audiobook to listen to, especially when you want to relax and escape from the daily grind or daily news.

Why do YOU think Pride and Prejudice is a romantic classic? Do you have a favorite audiobook version? 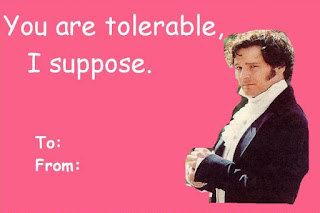