The Classics Circuit: Christmas Storms and Sunshine by Elizabeth Gaskell 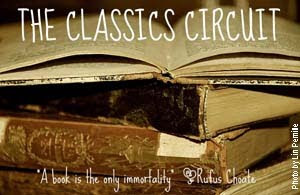 I was very excited that Elizabeth Gaskell was chosen to be so honored. I first read an Elizabeth Gaskell novel when I was a teenager obsessed with everything Bronte and read her Diary of Charlotte Bronte. At that point she was “Mrs. Gaskell” and I read that she was a famous novelist and wondered what novels she had written. It wasn’t until the wonderful Wives and Daughters mini-series was going to air on Masterpiece Theatre that I finally read that novel and loved it. I then read Cranford and Lady Ludlow and Other Stories in preparation of Cranford also appearing on Masterpiece Theatre. I have enjoyed what I have read of Gaskell and hope to read more.

Gaskell is a master at writing the minutia of small town life in Victorian England. “Christmas Storms and Sunshine” is a short story from 1848 that is an excellent example of this. Mr. Hodgson is the chief compositor of the democratic Examiner paper in town while Mr. Jenkins holds the same position at the Tory Flying Post paper. Both are married men and both happen to reside in the same house in different apartments.

The political argument of the men is taken up by the wives. Although they live in the same house, they are determined to not get along. One Christmas Eve both are preparing for their Christmas celebration the next day. Mrs. Hodgson has an 18-month old son, while Mrs. Jenkins would like a baby, but only has a beloved cat. Mrs. Hodgson is discovered by Mrs. Jenkins to be beating her beloved cat over eating some leftover mutton that he found in her open cupboard. She is not pleased.

I love one of the last lines of the story, “If any of you have any quarrels, or misunderstandings, or coolnesses, or cold shoulders, or shynesses, or tiffs, or miffs, or huffs, with any one else, just make friends before Christmas, - you will be so much merrier if you do.” What a great thought for the holidays.

Overall, I loved this short story. It had a great theme for the holidays and it also showed Gaskell’s skills at capturing not only small town life, but the emotions of the two main characters.
Posted by Laura's Reviews at 7:04:00 AM