The Spring Girls by Anna Todd 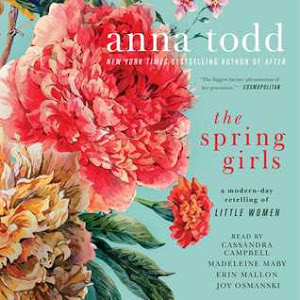 When I read the summary of The Spring Girls by Anna Todd and saw it was a modern-day retelling of Little Women, I knew I needed to read it.   The Spring Girls (Meg, Jo, Beth, and Amy) are living on a base in New Orleans with their mother waiting for their father’s return from Afghanistan.  The girls experience both love and loss.

I should let it be known that I am a Little Women super fan.  I’ve read the novel several times, listened to an audiobook, read many other Louisa May Alcott books including biographies of the author.  I’ve watched the many movie versions too many times to count and even watched the Japanese anime version as a child.

I found the book to be a disappointing retelling of Little Women.  The book goes through first person view points of the sisters and “Meredith” or Marmee from the original, with most of the story focusing on Meg rather than Jo of the original.  Meg in the modern-day version is frankly a tramp, but she doesn’t want you to think of her as a tramp.  This book missed what was so compelling about the original novel.  The great relationships between the “Little Women” as they grew through time and came of age.  It was their relationships with each other and what they wanted from life that was the focus of the novel, it was not a book about the conquest of men like The Spring Girls.  The Spring Girls failed to capture the spirit of each of the original March girls.  I think it would have been better served to be a standalone novel that wasn’t associated with Little Women at all.

One major segment of the book had Meg being the victim of naked pictures being passed around by an old boyfriend.  This could have been something to feel sympathy about, but I had a hard time with it.  Meg talked a LOT about how she used her body to get what she wanted from life and from men.  No one deserves to have naked pictures of themselves passed around, but you set yourself up for that when you let your boyfriend do it.  There was no personal responsibility from Meg on this or how making your way through life using your body is not a good thing.  I didn’t really like her at all.

I did think it was inspiring to make the King family that Meg worked for to be a wealthy African American family.  It was interesting at first to have a love interest in that family, but I thought it was strange how this was the focus and John Brooke was totally displaced.  Again, if this wasn’t Little Women, maybe . . . but it was supposed to be a modern Little Women.  John Brooke became a character vastly different than the original and I thought it interesting that neither man introduced Meg to their family while they were dating.

Jo has a dream to go to New York, but spends most of the novel developing a romantic relationship with Laurie.  Beth can’t seem to leave the house and Amy is obnoxious, even more so than original Amy.  It was kind of a strange take on Little Women.

It did work to have the family set on a military base waiting for their father’s return from Afghanistan.  I wish they would have focused on that more and how the family dealt with his injuries when he returned.  That seemed like a background story.

Although I didn’t care for the story, it was a great audiobook.  I liked how each 1st person narrator in the book got their own narrator in the story and some of the best in the business are on this book.  So strangely I enjoyed listening to this book and the audio while also really not liking the storyline.

This audiobook has a beautiful cover.  I loved it and it matches the title so well.

Overall, the narration on the audio was five stars, but I’d give the actual story something like two stars.  I had a hard time finishing it as I realized I didn’t really care what was going to happen in this story.
Posted by Laura's Reviews at 1:19:00 PM 4 comments:

The Trumpet of the Swan by E. B. White 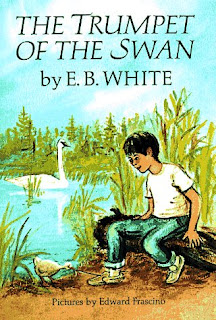 A young boy, Sam Beaver, travels to the wilds of Canada to camp with his father.  While there, he discovers a trumpeter swan nest.  He returns later that summer to see the young baby swans, and discovers one of them is mute.  Their friendship begins and young Louis learns how to adapt to his world first by attending school and learning how to write, and later becoming a trumpet player in order to communicate with other swans while making beautiful music.

My almost ten-year-old son Daniel and I read this book together for the Kewaunee Youth Book Club.  I read this when I was around Daniel’s age and I only remembered some of the story. It was a joy to reread it and Daniel loved the story.  He really loved when Louis went to camp and continued to have adventures.  He also loved Louis’s father, the Old Cobb, who liked to wax on in in very elaborate descriptions about items.  He thought he was pretty funny. My 12-year old son has just started reading it for book club, but is not enthused about it since his brother liked it.

Daniel and I loved how the tale was partially set in the wild and discussed the trumpeter swan.  Daniel is very curious about trumpeter swans now and really wants to see one.  We had to look them up when we finished the book and see where they are located in the U.S. and look at pictures.  We may be able to see one here in Wisconsin, but searching online lead me to the WK Kellogg Bird Sanctuary.  It is not far from where I grew up in Southwest Michigan and I went there as a kid.  They have provided a sanctuary for trumpeter swans in Michigan.  We have a new place to visit next time we are visiting my parents in Michigan.  Daniel is ready to go now especially when we read you get to feed the birds with buckets of corn.

I loved how the overall theme of the book was on a swan who was born with a disability, but through his own hard work and help from family and friends he was able to find ways to live a fulfilling life with his disability.  Even though Louis had a disability, he was a wonderful bird who had a great life and provided a lot of joy to a lot of people.

The drawings by Edward Frascino were delightful and added to the story.

“Remember that the world is full of youngsters who have some sort of handicap that they must overcome.  You apparently have a speech defect.  I am sure you will overcome it, in time.  There may even be some slight advantage, at your age, in not being able to say anything.  It compels you to be a good listener.  The world is full of talkers, but it is rare to find anyone who listens.”

“It scared him to be different.  He couldn’t understand why he had come into the world without a voice.”

“Darkness settled on woods and fields and marsh.  A loon called its wild night cry.  As Louis relaxed and prepared for sleep.  All his thoughts were of how lucky he had been to solve his problems with music, and how pleasant it was to look forward to another night of sleep and another day tomorrow, and the fresh morning, and the light that returns with the day.”

Overall, The Trumpet of the Swan is a wonderful tale that is enjoyable to both child and adult.  I loved the overall theme of overcoming adversity. 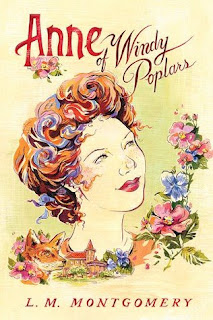 While Gilbert is finishing medical school for three years, Anne is the principal of Summerside High School in the town of Summerside.  She resides with Aunt Kate, Aunt Chatty, and Rebecca Dew in a rented room at Windy Poplars.  Anne has a troublesome time taking over the reins as principal, but as she is Anne Shirley, she preservers.

This book is different than the first three in the series as it is made of up letters that Anne has written to Gilbert about her experiences.  It’s also interesting as Anne of Windy Poplars is the fourth book chronologically by Anne’s age, but it was the seventh book written, twenty years after the series was complete.  You could tell at times when Anne says things such as good thing Canada is beyond being involved in wars.  That was foreshadowing what will happen in the last book of the series, Rilla of Ingleside.

I loved Tara Ward’s narration.  She has a wonderfully expressive voice and acted out the parts giving a new voice to each character.  It was a very enjoyable listening experience.

LM Montgomery is such a wonderful character writer. I loved the crabby old lady who wouldn’t let her daughter have a day away and the crabby old man that sulked and wouldn’t speak to his family which led to an explosive family dinner that Anne attended.  Anne met a lot of new and interesting characters in this book and almost seemed to have a magical way to solve their problems.

This novel does tell Anne’s story of gaining acceptance in Summerside, especially from the Pringle clan and also how she helped out her fellow teacher, the very cranky Katherine Brooke.  Anne also spends a lot of time helping a lot of different people around town.  The novel seemed more vignettes of their individual stories. I was having a bit of troubles with my audiobook at times and I would miss a minute (the Overdrive audio player wouldn’t pause in the car when someone would call.  Aaah!!) and be very confused on where I was as there were all new characters suddenly.  I wish the characters would have interacted more so I didn’t learn about them in one section only to never hear about them again for the rest of the book.  I am a great fan of LM Montgomery’s short stories so this worked for me thinking of them as short stories.

Dusty Miller is a fabulous name for a cat – it’s the name of the cat that lives at Windy Poplars. I need a new gray cat just so I can name it that. I almost feel like there should be a book called the “Cats of Green Gables” that describes and pictures the different interesting cats that are in the series.
Favorite Quotes:

“Gilbert darling, don't let's ever be afraid of things. It's such dreadful slavery. Let's be daring and adventurous and expectant. Let's dance to meet life and all it can bring to us, even if it brings scads of trouble and typhoid and twins!" (Anne to Gilbert)”

“Isn't it queer that the things we writhe over at night are seldom wicked things? Just humiliating ones.”

“It was really dreadful to be so different from other people…and yet rather wonderful, too, as if you were a being strayed from another star.”

“Nothing worthwhile is every easy come by.”

Overall, Anne of Windy Poplars is an interesting part of the series that fills in the three-year gap with Anne’s doings and interesting stories, but it is not as strong a novel as the previous three books.  That being said, even a not as strong LM Montgomery book is still a very enjoyable experience, and I loved listening to this audiobook.
Posted by Laura's Reviews at 1:10:00 PM 2 comments: