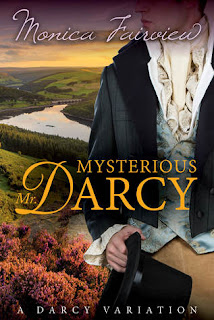 What if Pride and Prejudice did not happen the way you remember it? What if Mr. Bingley had not let Netherfield Hall at the exact time he did?  What if three years had passed, with Jane already married when Mr. Bingley and his guests arrived?  What if Mr. Darcy had a mysterious past that has led him into a life as a recluse?  If Meryton does not know him as the wealthy man of his past, how would he be treated?

Mysterious Mr. Darcy is a Pride and Prejudice variation.  It changes items about the original story and goes through what could have happened instead.  I’ve read many of Monica Fairview’s Austen sequels and variations in the past and I really enjoy them.  Fairview knows and loves all of Austen’s characters.  Her stories convey this love and they are written so believably that it is like picking up another work by Jane Austen.  Mysterious Mr. Darcy was no exception.

I had a hard time putting Mysterious Mr. Darcy down once I started reading it.  I LOVED the storyline and wondered, what had Mr. Darcy done to be a recluse trying to hide who he was.  It was an interesting look at if Jane wasn’t around, how would the story have played out?  Would Mr. Bingley and Elizabeth be suited for one another?  I loved that Fairview captured the romance and humor of the characters and brought them forth in the story, but also discussed Elizabeth’s worry about her situation.  In particular after Mr. Bennet has a near death experience, she really has to think about what Mrs. Bennet has been saying all along.  What will happen if Mr. Collins and Charlotte come to take over Longbourn?

I also enjoyed the fact that Mr. Darcy was a recluse at an estate in Cornwall.  I kept envisioning him at Manderley from Rebecca!  Wrong book and century I know, but hey, Laurence Oliver was both Mr. Darcy and Max de Winter so it sort of works!  The cover is also very beautiful for this book.
I also loved Mr. Bennet in this novel.  Mr. Bennet goes hunting with Mr. Darcy and Mr. Bingley.  He thinks Mr. Darcy is a nobody, but he treats him nicely.  Mr. Darcy respects that and I could see them having a better relationship than in the original novel.

“This is what Darcy had always liked about Bingley – his willingness to throw himself wholeheartedly into any scheme he had decided on.”

“The trouble was, she wanted more out of marriage than simply convenience.  Something inside her yearned for love.”

“Only now did she realize how close they were to destitution.  Everything depended on her father’s health.  If it gave way, they would be left with nothing.”

“For the first time, Darcy felt there was an advantage to being unknown.  It gave him a clearer idea of who his friends really were.”

Overall, Mysterious Mr. Darcy is my favorite Austen variation yet.  I loved the mystery and romance, but especially the wonderful characters.  The twists to the story were very intriguing.