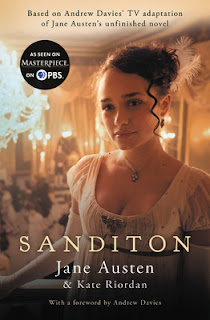 I have had some computer issues that have put me behind on reviews.  My windows decided to update and make my computer nonfunctional.  I’m luckily back on my computer with fingers crossed that this won’t happen again.

Have you been watching Sanditon on Masterpiece Theatre on PBS?  It is an enjoyable regency series and I must admit that I love Theo James and his portrayal of Sidney Parker.  The series keeps getting better with time and leaves us with quite a cliffhanger.  I sincerely hope it comes back for a second season.

Sanditon is Jane Austen’s last fragment of a novel.  It leaves delicious possibilities in its brief eleven chapters for where Austen would have taken the story.  Tom Parker has made it his life’s mission to make the coastal town of Sanditon into a seaside destination, especially for those looking to improve their health.  After an unfortunate accident while looking for a doctor for Sanditon, the Parkers take Charlotte Heywood back to Sanditon with them.  As the daughter of a large country family of gentleman, Charlotte has not had much opportunity to travel.

While staying with the Parkers in Sanditon, Charlotte meets a host of interesting people.  Lady Denham has the wealth that Tom Parker needs to fund the improvements in Sanditon.  Her young cousin Clara lives with her hoping to be her heir. Lady Denham’s niece and nephew by marriage, Sir Edward and Esther Denham also hope to be made heirs.  A party of ladies come to visit Sanditon causing excitement, especially when an heiress from the West Indies, Georgiana Lambe is part of the party.  Miss Lambe had a white English father, and a black African mother.  Tom’s brother, Sidney, comes to town with friends and immediately attracts and annoys Charlotte.  She is also intrigued by the building of the community that is going on as well and befriends Young Stringer, the son of the stonemason that is the construction foreman.  I enjoyed the delve into architecture.

It’s interesting how books differ compare to movies and TV shows.  This novel sticks very closely to the Masterpiece Theatre series, but I loved Young Stringer in the book and wanted Charlotte to end up with him, but in the series, Sydney Parker was my favorite for Charlotte.  It’s interesting how acting and the chemistry between the actors can make so much of a difference.

Sanditon was a very enjoyable read to me, but it is not your typical Austen novel.  The action jumps around more quickly due to the nature of it being written based on a TV series and there is a lot more sex in the book than you would see in an Austen novel.  That being said, while the story showed a different world than other Austen novels, many of the core themes were the same with a headstrong woman in the lead and a tall, dark, and infuriating man as her romantic interest.  I enjoyed the side characters as well, especially Georgiana Lambe and Esther Denham.  Esther was the Caroline Bingley or character you despise, but in Sanditon, she reforms her ways and I really liked her by the end.  Georgiana Lambe was such a unique character in an Austen novel being a black heiress in Regency England.  I loved her story and wanted more. 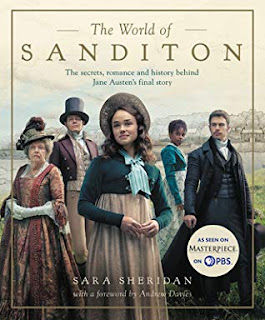 I have previously read Sanditon by Jane Austen and Another Lady and Charlotte by Jane Austen and Julia Barrett over twenty years ago.  Reading this new novel, really makes me want to reread these old continuations to see how the story went in different directions.

Overall, Sanditon by Jane Austen and Kate Riordan is an entertaining continuation of Jane Austen’s novel.

The World of Sanditon by Sara Sheridan is a wonderful companion book to both the novel and the series. It contains beautiful pictures of the characters including my favorite, Sydney Parker (Theo James).  The book is broken down into sections about Jane Austen, the Seaside, the story of Sanditon itself, life in the Regency era, and health.  It contains fascinating information that can either be read in pieces or you can read the book as a whole.  I’ve enjoyed picking it up and reading tidbits about different topics over time.

Book Source:  Review Copies as a part of the Sanditon Review Roundup.  Thank-you!

In the vein of Downton Abbey, Jane Austen's beloved but unfinished masterpiece-often considered her most modern and exciting novel-gets a spectacular second act in this tie-in to a major new limited television series.

Written only months before Austen's death in 1817, Sanditon tells the story of the joyously impulsive, spirited and unconventional Charlotte Heywood and her spiky relationship with the humorous, charming (and slightly wild!) Sidney Parker. When a chance accident transports her from her rural hometown of Willingden to the would-be coastal resort of the eponymous title, it exposes Charlotte to the intrigues and dalliances of a seaside town on the make, and the characters whose fortunes depend on its commercial success. The twists and turns of the plot, which takes viewers from the West Indies to the rotting alleys of London, exposes the hidden agendas of each character and sees Charlotte discover herself... and ultimately find love.

Kate Riordan is a writer and journalist from England. Her first job was as an editorial assistant at the Guardian newspaper, followed by a stint as deputy editor for the lifestyle section of London bible, Time Out magazine. There she had assignments that saw her racing reindeers in Lapland, going undercover in London's premier department store and gleaning writing tips (none-too subtly) during interviews with some of her favorite authors. After becoming a freelancer, she left London behind and moved to the beautiful Cotswolds in order to write her first novel. 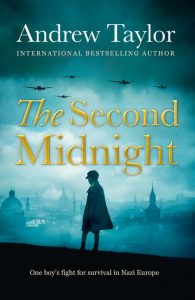 The Kendell family is a typical family in pre-WWII England.  Alfred Kendall is struggling to keep his family business of importing glass afloat through the tough economic times.  When he is given the opportunity by the British government to go on a minor mission to Czechoslovakia, he jumps at the change to serve his country and to also hopefully earn some much-needed money.  Intelligence tells him to take his young son Hugh with him for cover.  After Hitler invades, Alfred has to make a choice.   The Czech resistance will get him out, but he must leave Hugh behind to ensure his return.  When Alfred cannot return what will happen to Hugh?

Hugh’s disappearance rips his family apart as they try to survive WWII.  Hugh himself goes through much adventure trying to survive.  Hugh learns that the enemy is not always apparent.  His brother Stephen goes into intelligence during and after the war, and his sister Meg searches for love and stability.

I liked that the story was very unique.  About half of the book was set in WWII and then the last half was set in post WWII England and it focused on espionage.  I loved the East European setting for much of the book.  I also loved the love story between teenage Hugh and Magda, the daughter of a high official off the Nazis.  I thought the story had a good overall look at German people.  Some were fanatical supporters of the Nazi regime, and others were just trying to survive.

I had a hard time with the flow of the story at times.  There were a lot of minor characters with missing pieces in their story.  As the book went along, the missing pieces were mostly filled and everything tied together at the end.  One item I seriously disliked was the incest between Hugh and his sister Meg at the start of the story (involved inappropriate touching).  It’s not something I want to read about and it did not add to the story at all.

Overall, The Second Midnight was an interesting WWII thriller and post WWII espionage novel.  It was a unique story that was full of action.

Book Source:  Review Copy from Harper Collins as a part of the TLC Book Tour.  Thank-you!   For more stops on this tour, please check out this link.

About The Second Midnight

A secret mission… 1939. As Europe teeters on the brink of war, Alfred Kendall is tasked with carrying out a minor mission for the British Intelligence Service. Traveling to Prague, he takes his troubled young son, Hugh, as cover.

A terrible choice… When Hitler invades Czechoslovakia, Alfred is given an ultimatum by the Czech Resistance. They will arrange for him to return to England, but only if he leaves his son Hugh behind as collateral.

A young boy stranded in Nazi terrain… Hugh is soon taken under the wing of a Nazi colonel – Helmuth Scholl. But even though Scholl treats Hugh well, his son, Heinz, is suspicious of this foreigner. And as the war across the continent intensifies, they are set on a path that will ultimately lead towards destruction… .

Andrew Taylor is the author of a number of crime novels, including the ground-breaking Roth Trilogy, which was adapted into the acclaimed TV drama Fallen Angel, and the historical crime novels The Ashes of London, The Silent Boy, The Scent of Death and The American Boy, a No.1 Sunday Times bestseller and a 2005 Richard & Judy Book Club Choice. He has won many awards, including the CWA John Creasey New Blood Dagger, an Edgar Scroll from the Mystery Writers of America, the CWA Ellis Peters Historical Award (the only author to win it three times) and the CWA’s prestigious Diamond Dagger, awarded for sustained excellence in crime writing. He also writes for the Spectator and The Times. He lives with his wife Caroline in the Forest of Dean.
Posted by Laura's Reviews at 8:22:00 PM 5 comments: