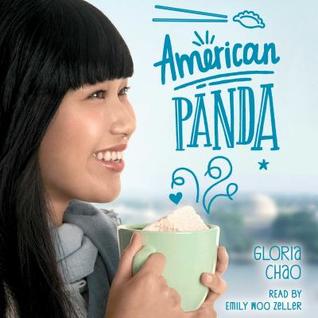 Mei is a seventeen-year-old Taiwanese American student starting at MIT. Mei’s life has been mapped out for her by her overprotective traditional parents. Her parents want her to be a doctor, but Mei is not so sure as she hates germs, Biology, and gets squeamish at the sight of blood.  She doesn’t want to disappoint them, but she dreams of working in her real passion, which is dance.  She also is afraid of getting kicked out of her family, as her brother Xing did for dating an “unsuitable” women.  Mei misses Xing and wonders – what will happen to her if she follows her dreams?  Especially when her dreams include fellow student, Darren Hakahasi who is Japanese American.

This still makes me laugh, but I thought it was a memoir until about halfway through the audiobook.   I guess you can say this really felt like realistic fiction to me!  I really enjoyed the story. It’s a young adult story about finding yourself.  Mei really wants to be a good daughter to her parents, but can she do it without losing her own soul?  I also really liked how her parents want her to keep her Taiwanese traditions, but she is American and has a problem trying to be both American and Taiwanese.  Family is complicated.

The title, American Panda, is a sad fat joke.  Mei thinks she is an American panda as she is not a skinny Chinese girl.  It was a cute joke in the book, but also sad.

Emily Moo Zeller was an excellent narrator. I felt that she was Mei in the novel.

“And right now, I had no idea where I ended, and my parents began.”

“I couldn't go through life as a shadow.” 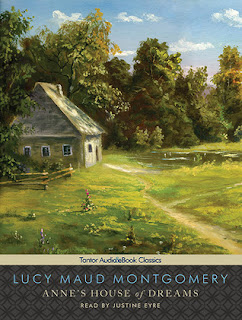 The fifth novel of the series, Anne’s House of Dreams starts with Anne and Gilbert finally having their dream wedding.  Times were different back then – Anne couldn’t have Diana as a bridesmaid as she is already married. The happy couple set off for their new home near the village of Glen St. Mary where Gilbert will be helping his Uncle with his medical practice with the goal of eventually taking over.  There they settle into their little “house of dreams” with Anne starting the role of keeping house for Gilbert.

This novel doesn’t focus solely on their new marriage, but it is more about the neighbors and friends that they make while in their house of dreams. There are great characters and side stories.  Leslie Moore is a beautiful and tragic neighbor.  She was married young at 16 to the odious Dick Moore under pressure from her mother to keep the family home.  An accident while on a trip to the Caribbean renders Dick brain damaged and handicapped.  While he is easier to handle, Leslie is unable to have a family or great love in her life.  What will happen to Leslie?

Captain Jim is an elderly neighbor who watches the light house with his cat and tells fantastic stories of his adventurous youth. Miss Cornelia Bryant does not have a great fondness for men, but she knows that Anne is one of the “race that knows Joseph” which seems akin to “kindred spirits”.

I always think of the Anne of Green Gables series as a happy story, but there is a dark chapter of loss in this book as Anne and Gilbert lose their first child.  Anne is not strong after this and maid Susan Baker comes to live with the Blythes to help them out. It’s hard to think of strong vivacious Anne losing a child and being in such a weakened state.  Listening to my own family stories, this happened to my own Great-Grandmother in the 1920s and a nurse was brought in to take care of her.

Anne’s House of Dreams was delightful to listen to on audiobook.  Justine Eyre is a great narrator and have good voices for the various characters.  It is an enjoyable tale to listen to, although I did feel emotional during a few moments.  Hopefully no one was looking into my car to see my tears dripping down my cheeks.

“My library isn't very extensive but every book in it is a friend.”

“I'd like to add some beauty to life," said Anne dreamily. "I don't exactly want to make people KNOW more... though I know that IS the noblest ambition... but I'd love to make them have a pleasanter time because of me... to have some little joy or happy thought that would never have existed if I hadn't been born.”

Overall, Anne’s House of Dreams is a wonderful story full of unforgettable characters and showcases the early years of Anne and Gilbert’s marriage.  It is wonderful as an audiobook.
Posted by Laura's Reviews at 8:59:00 PM No comments: 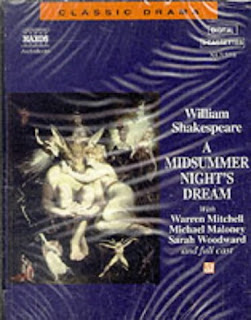 Shakespeare was meant to be read aloud.  Even when I took Shakespeare classes in high school and college, I would read the plays out loud to myself.  As plays, they are meant to be spoken word.  That is why I always enjoy audiobook productions of Shakespeare’s plays.

This production was wonderful.  They had a full cast play all the parts and they acted them with their all.  I especially love hearing this play spoken with British accents.  I also loved the classical music that was played between scenes of the play in this audiobook.  It was very fitting with the play and enjoyable.

A Midsummer Night’s Dream is one of Shakespeare’s comedies.  Theseus, Duke of Athens is marrying Hippolyta, Queen of the Amazons in a wooded area that is also inhabited by Fairy folk.  As events unfold, various couples are caught up in various misunderstandings and hilarity ensues.
I love that this play focuses on both love and on comedy.  Nick Bottom and Puck are two of my favorite comedy characters in any of Shakespeare’s plays and they both appear in this play.  I also love how misunderstandings form a lot of the comedy in a Shakespeare play.  In this play there is a love potion that causes a lot of misunderstandings.  I also love plays within a play.  This one has a play that is so terribly performed that everyone thinks it is a comedy which is quite hilarious.  The bad acting comes through in the audiobook version of this play within a play.

I saw a wonderful outdoor production way back in 2000 put on by the American Player’s Theatre in Spring Green, Wisconsin.  It was an outdoor theatre and the play was magical.  I was in Wisconsin with my best friend Jenn visiting her Aunt and Uncle in Madison, a couple of years before I moved to Wisconsin.  It was so nice of her Aunt and Uncle to take us to this production – and it is something that I will never forget.  Seeing Shakespeare on stage is always wonderful, but this production was especially wonderful as the setting was the woods and having the actual play outdoors fit so well.  The audiobook version of this play is fantastic – but seeing the actual production, even better.

I revisited A Midsummer Night’s as part of the Facebook Literary Classics group for May readings.
Favorite Quotes

“The course of true love never did run smooth.”

“And yet, to say the truth, reason and love keep little company together nowadays.”

“Though she be but little, she is fierce!”

Overall, A Midsummer’s Night Dream is a wonderful class comic play and audiobook.
Posted by Laura's Reviews at 8:47:00 PM No comments: