Sisters of Treason by Elizabeth Fremantle Review and Giveaway! 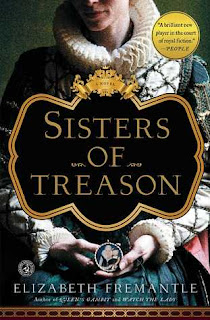 Lady Jane Grey was Queen of England for nine days.  Named as the heir to the throne by her cousin King Edward, she was also included in the line of succession of King Henry VIII’s will behind his own children.  After Lady Jane and her husband Guildford Dudley were beheaded for treason, Lady Jane left behind two sisters, Lady Katherine, and Lady Mary who would also be pawns in the game for the throne of England.

Lady Katherine was married to Harry Herbert when she was 12 on the same day her sister Jane married Guildford Dudley.  Her marriage was annulled after her sister’s fall from Grace, but she has continued to love Harry from afar as she grows up.  She soon learns through life’s twists and turns that as someone so close to the throne, she is not allowed to love who she would like, but that her love life is a matter of state.

Lady Mary has a twisted spine and is tiny, but she has a heart of gold.  Petted and pawned over by Queen Mary, she and her family must hide their Protestant faith for fear that they will be condemned.  She must also hide her hatred for the Queen that ordered her sister’s execution.  After Elizabeth becomes Queen, Lady Mary is still a pawn that cannot find her own happiness.

Levina Teerling is an artist who paints the tiny portraits popular among the court set.  A friend of Frances Brandon Grey, Levina promises to watch over her daughters while at court.  As a woman Protestant artist, Levina has problems with trying to make sure her religion isn’t known as well as keeping the love of her husband George when he feels she spends too much time on the Grey girls.

I enjoyed this novel.  I liked the complex look on the every changing religious tides during these turbulent years and three different looks at how a woman could try to shape her own life to varying degrees of success.  I had never thought about Jane Grey’s sisters and what her execution would have meant to them.  Even more powerful was how being in line for the thrown of England meant that your life was not your own to decide.

Overall, Sisters of Treason is an intriguing look at the lives of three fascinating women during the Tudor era.  I highly recommend it.

Book Source:  Review Copy from Simon and Schuster – Thanks!

Giveaway
One lucky winner will receive a copy of  Sisters of Treason by Elizabeth Fremantle courtesy of Simon and Schuster.  If you would like to win Sisters of Treason, please leave a comment on why it sounds interesting.
As part of your comment, you must include an email address. If I can't find a way to contact you I will draw another winner.
For an additional entry, blog about this giveaway or post it on your sidebar. Provide a link to this post in your comment.

I will be using random.org (or a Monte Carlo simulation in excel) to pick the winners from the comments.
This contest is only open to US  residents (Sorry!).
No P.O. Boxes.
The deadline for entry is midnight on Friday September 11th!
Please make sure to check the week of the 14th to see if you are a winner. I send emails to the winner, but lately I've been put in their "junk mail" folder instead of their inbox.
Good luck!
Posted by Laura's Reviews at 1:29:00 PM 4 comments:

Winner of The Wonder of All Things by Jason Mott! 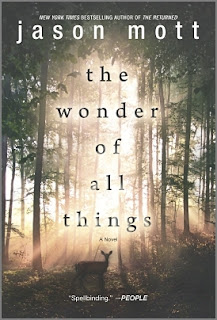 The winner of The Wonder of All Things by Jason Mott is Josh Cormier!  I've emailed Josh at the address he left on her post on this blog.  He has one week to respond with his mailing address.  If I don't hear from his within that time frame, a new winner will be selected.  Josh was chosen using random.org.  Congrats to Josh!

Sad that you didn't win?  Don't worry, I will be posting a review and giveaway of another excellent novel shortly.
Posted by Laura's Reviews at 1:00:00 PM No comments:

The Girl on the Train by Paula Hawkins 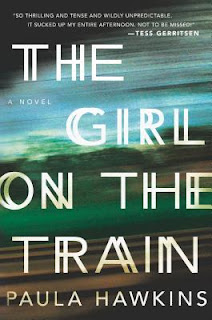 Rachel is an alcoholic divorcee that takes the same commuter train to London to and from work each day.  She loves to watch one house in particular that is a neighbor of her own past home that she shared with her cheating husband.  She loves the couple who live in this house and has fondly called them Jason and Jess.  Rachel loves to imagine the perfect life of romance that they lead.  One day Rachel sees something shocking and feels that she needs to let them know about it.  When “Jess” goes missing on a night that Rachel has no memory of besides being in the neighborhood, Rachel tries to solve the mystery of her disappearance.

I was intrigued by the mystery and unreliable narrator of this novel.  Besides Rachel, her husband’s new wife Anna, and “Jess” are also narrators to try to put together the clues of what happened in this situation.  I didn’t really like any of the characters, but this isn’t a problem for me as long as the story is intriguing.  I enjoyed reading this one, but I guessed the ending about half way through so the ending wasn’t as shocking as it could have been.

Overall, The Girl on the Train is a good thriller, but with all of the hype, I was a little disappointed that I guessed what the ending would be.  It was still an entertaining book to read. 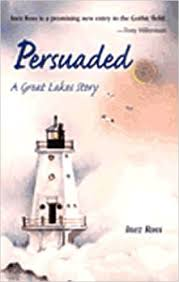 I spent last week in Lower Michigan visiting my family with my three kids.  Part of our Michigan trip each year is to take the Badger Ferry boat across Lake Michigan with our car, and then drive the three hours remaining to where my parents live.  The Badger has a variety of activities that keep my kids happy, much happier than sitting in traffic on a long drive through Chicago.  One place they like to visit is the Badger boutique.  I was looking through the books for sale and came across Persuaded.  I thought, could this be a modern Jane Austen tale?  I did a quick flip-through and discovered it was a modern Jane Austen tale set on Mackinac Island and in the Upper Peninsula.

Ann Elliot worked for one beautiful summer on Mackinac Island before college and there met a young, handsome carriage driver, Frederick Wentworth.  Her family deemed him socially unacceptable and when she never received a letter from him, she tried to forget him as she went off to college and he went to the Coast Guard academy.  Five years later, their paths collide again when Frederick’s married sister and brother-in-law rent the Elliot estate in the Upper Peninsula.  Ann is instantly attracted to Frederick, but hurt that he forgot her so quickly.  Frederick seems smitten with Ann’s sister Mary’s sister-in-law, Louisa.  When distant cousin William Elliot shows up on the scene, Ann doesn’t know whether she should be smitten with him or distrustful of him as he always seems to find a way to separate her and Frederick.  Will true love prevail?

I loved the local landmarks.  Even better was reading this novel on the Badger while the characters make a journey to Ludington and cross the Badger.  They also stop in Escanaba on their way back to Mackinac Island.  It was also a sweet, unique take on one of my favorite Austen novels, Persuasion.
I didn’t like how the book had a few typos and that the locations sometimes had their correct names, but sometimes were called something else such as St. Ignace and Mackinac Island.  I know there are rich people on the island and that vacation in the Upper Peninsula, but I did live in the U.P. for six years and have a hard time imagining a society matron such as Ann’s Aunt Jewell existing there.  She was a fun character, but I had a hard time with it.

Overall, Persuaded is a light and fun version of Jane Austen’s Persuasion with a modern twist and nice local setting.  It’s more fun if you don’t get wrapped up in the details.

Book Source:  Purchased from the Badger Ferry Boutique
Posted by Laura's Reviews at 6:44:00 AM 4 comments: