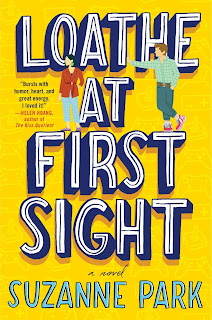 Loathe at First sight was a great book that cheered me up and had several laugh out loud moments for me.  Even better, this lighthearted at times book, also delved into the sexism and racism that occur when a young woman of Korean descent tries to make her way in the world of video gaming.  This book was so much more than meets the eye.

Melody Joo is has gotten a new job as a video game producer.  As one of the few women and only Korean at the company, she is looked down upon by her male colleagues.   She also ponders the sexist world of video games and for a lark tells her friend that they should make a game with male strippers fighting for survival in the post-apocalyptic world.  Her boss overhears and needing a new game for women, he decides to make her project the top priority.  Melody faces a lot of complications, but will she be able to make her game a success?

As a female in the primarily male field of engineering, I felt Melody’s story.  The awkward sexist talk where you have to laugh along and being treated as a lesser than are unfortunate experiences.  I loved her perseverance, and how she called people out on sexist and racist comments.  I liked the honest look that for Melody to make it, she had to work harder than everyone.

I really liked all of the characters and side stories in this novel.  Melody has romantic feelings for the intern, Nolan, who also happens to be the nephew of the main boss.  Although Nolan is actually older than her, she knows it is inappropriate due to their positions of power.  I liked how their relationship played out.  I also thought Melody’s parents were hilarious. Her mother has an obsession with Melody getting married and seems to always focus on the negatives. Nolan and Melody’s parents’ accidental lunch together was hilarious.  I laughed out loud. Melody’s friends were fantastic as well.

“Was I angry that they were like this?  Or was I angry at myself for wishing I was a part of it?”

Overall, Loathe at First Sight was a delightful story with great characters, plot, humor, and a realistic look at being a woman in a male dominated field. 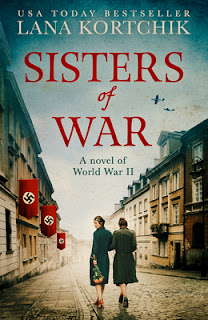 How do you survive when the Nazis take over your city?  Natasha and Lisa Smirnova live with their happy family in Kiev, Ukraine.  In 1941, the battered Red Army withdraws, and the Nazis invade.  As the Nazis take over their beloved city, conditions begin to deteriorate, and the sisters must make decisions to help their family and friends survive.  Will they and their family be able to make it through the war? What about the men they love?

Sisters of War was a very intriguing World War II story.  First of all, I don’t think I’ve ever read a novel set in the Ukraine, so I thought it was very fascinating to read a World War II novel from that point of view.  What was it like to live in the Ukraine and be taken over?  It’s a far different perspective than novel set in France or Britain.

I also was intrigued by yet another perspective – that of men pressed into service by the Nazi that didn’t want to be in their ranks.  Mark is a Hungarian solider that saves Natasha from an attack.  They fall in love and have a forbidden romance.  Fellow Ukrainians would find Natasha to be a traitor for dating a “Nazi,” but Mark does not want to be fighting with the Nazis and helps her family at every turn.  The Germans do not treat the Hungarians well.  It really made me think about Eastern European countries and all of those that may have been forcefully drafted by the Nazis.  I had never thought about this before.  I loved this forbidden romance.

I was also horrified to learn of the Babi Yar atrocity.  In 1941, the Nazis marched all of the Jewish people in Kiev to the Babi Yar ravine and executed them.  It was horrifying to read about.  The novel didn’t detail graphic violence, but just the horror of thousands and thousands of family and friends marching down the streets towards their death.  It was horrifying also that the Soviets had left Kiev without food to starve out the Nazis, but the Nazis also would trim down the population as well.

“The only thing Natasha Smirnova knew for a fact on 19th September 1941, when Hitler entered Kiev, wa

s that life as she knew it was over. “

Overall, Sisters of War was an intriguing look into World War II from the Ukrainian perspective and a wonderful novel of a family trying to make it through the most trying of times.  I highly recommend this novel to all lovers of WWII historical fiction.

Book Source:  Review Copy from Harper Collins as a part of the TLC Book Tour.  Thank-you!  For more stops on this tour, check out this link.

About Sisters of War 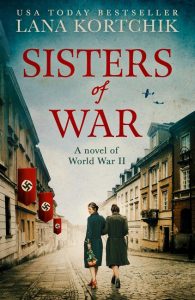 Can their bond survive under the shadow of occupation?

For fans of The Tattooist of Auschwitz and The German Midwife comes this unforgettable tale of love, loss, family, and the power of hope.

Kiev, 1941: Watching the Red Army withdraw from Ukraine in the face of Hitler’s relentless advance, sisters Natasha and Lisa Smirnova realise their lives are about to change forever.

As the German army occupies their beloved city, the sisters are tested in ways they never thought possible. Lisa’s fiancé Alexei is taken by the invading army, whilst Natasha falls in love with Mark – a Hungarian soldier, enlisted against all his principles on the side of the Nazis.

But as Natasha and Lisa fight to protect the friends and family they hold dear, they must face up to the dark horrors of war and the pain of betrayal. Will they be strong enough to overcome the forces which threaten to tear their family apart?

Why readers love Sisters of War:

‘Captivating from the first page’

Originally published as The Story of Us. 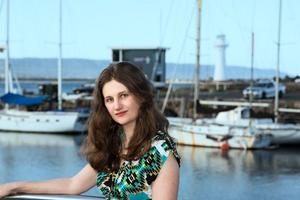 Lana Kortchik grew up in two opposite corners of the Soviet Union – the snow-white Siberian town of Tomsk and the golden-domed Ukrainian capital, Kyiv. At the age of sixteen, she moved to Australia with her mother. Lana and her family live on the Central Coast of NSW, where it never snows and is always summer-warm.

Lana studied IT at university and, as a student, wrote poetry in Russian that she hid from everyone. For over a decade after graduating, she worked as a computer programmer. When she returned to university to complete her history degree, her favourite lecturer encouraged her to write fiction. She hasn’t looked back, and never goes anywhere without her favourite pen because you never know when the inspiration might strike.

Lana’s short stories appeared in many magazines and anthologies, and she was the winner of the Historical Novel Society Autumn 2012 Short Fiction competition. Her first novel, Sisters of War, was acquired by HQ Digital, an imprint of Harper Collins UK, in 2018 and later became the USA Today bestseller. 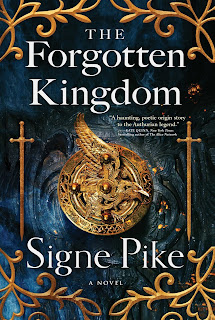 What would you do if your husband was at war with your brother?  The Forgotten Kingdom starts up right where The Lost Queen ended.  Languoreth is a woman in the Middle Ages, the daughter of a king, and wife of the presumptive heir to the throne of Strathclyde (in what is now Scotland).  Her husband, Rhydderch and eldest son have just left to battle the Dragon warriors, who are led by her foster brother, Uther Pendragon, and where her twin brother Lailoken, and young daughter Angharad live.  Lailoken is a Wisdom Keeper and is training Angharad in being a Wisdom Keeper as well.  In the future, Lailoken will be known as “Myrddin” or Merlin.  Who will survive and how will this divided family move forward?

I loved The Forgotten Kingdom even more than I loved The Lost Queen.  I loved the action in this novel, and I love that the viewpoint was split three ways.  This time we see the story through Languoreth, Lailoken, and Angharad’s point of view.  The battle scenes were riveting.  It was particular exciting with Lailoken and Angharad on the run separately for much of the book.   I love that it also delves deeper into the background story of many of the characters.  It was an exciting story that kept you on the edge of your seat.  It was also an interesting look into the Middle Ages, a time when Christianity was moving into Scotland and at odds with the old religion.  I can’t wait to see how this trilogy will conclude.

“Hell is watching a man you once trained in weapons take a spear through the chest.”

“Time is not a masterful healer, but at least it is persistent.”

“Memory, when preserved, can never be taken.’

“Who would sing of their heroism?  Who yet lived to remember them?  There is you, I told myself.  But when I was gone?  Theirs would become a forgotten kingdom.”

Overall, The Forgotten Kingdom is an exciting look into war, love, and religion in the Middle Ages of Scotland.