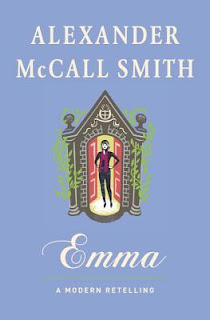 Emma Woodhouse has just finished her university degree and is spending her summer at home with her father, Henry Woodhouse, before she will embark on her chosen field of interior design.  While at home, she befriends a new girl, Harriet Smith, and hopes to help her find true love while also meddling with the lives of other people around their small village.  Emma spends the summer finding out more about herself and compassion for others.

I had mixed feelings about this book.  On one hand, I loved, loved, loved the added detail and background on Mr. Woodhouse, Miss Taylor, Emma, and her sister Isabella growing up. I also loved learning about Isabella’s romance with John Knightly.  The bad was that the story seemed to meander after this. Truthfully I thought it was going to end up being a love story between Emma and Harriet as Emma found Harriet to be so attractive, shivered with disgust at the thought of sex with men, and painted Harriet in the nude.  George Knightly and Emma had hardly any interaction and Frank Churchill was also not featured very much.  Therefore, the ending was a surprise and not the great build-up that happens in the Austen novel.

Overall, this is an entertaining retelling of Emma that provides a lot of great background, but fails to provide the romance and wit that made the original Emma a classic.  The story meanders strangely with an ending that doesn’t fit the rest of the novel.  I enjoyed the other two entries in the Austen Project much more. 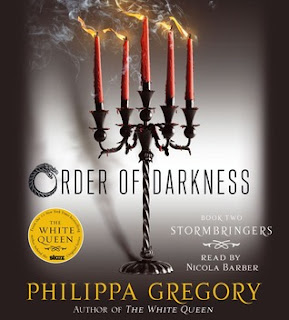 In the late fifteenth century, Luca is a young handsome monk in training that is traveling with his servant Freize and Secretary Brother Peter as part of the Order of Darkness looking for signs that the end times are near. They are traveling with the beautiful disinherited Lady Isolde and her Muslim friend and foster sister Ishraq.  Isolde is traveling to find family that will help her regain her lawful inheritance from her brother.

While enroute, the travelers meet with a young mystery man, Johann, who says he speaks for God and is leading an army of children on a crusade to the Holy Land.  Johann seems to know details about everyone in his audience which leads them all to believe that he does indeed speak for God.  Half under his spell, Luca, Freize, Isolde, and Ishraq decide to follow him and investigate for the Pope to see if Johann represents God or the Devil.  What happens next is shocking and I don’t want to ruin it for you!

I have not read (or listened to) the first novel in the series, but I felt like this book did well as a stand-alone story.  I was intrigued by the characters, but especially by the story of the Children’s Crusade.  Although this novel is fantasy, author Philippa Gregory had a note at the end that explained where she got the historical background for much of the plot.  I thought the end note was fascinating.
This audiobook kept me intrigued on my work commute.  Nicola Barber was a good narrator and the story was very unique and interesting.  This book set up a battle that will be between the Christian and Muslim faiths in future books as each tries to hold Constantinople and the Holy Land.  There was a twist at the end that I am still puzzling over, and I know I can’t wait to listen to the next novel.

Overall, Stormbringers was a unique fantasy young adult novel that deals with the conflict between Christianity and Islam during the Middle Ages.
Posted by Laura's Reviews at 4:31:00 PM 2 comments: 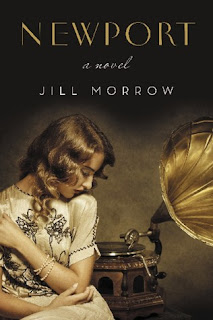 Attorney Adrian de la Noye and his young colleague Jim, have been called by Adrian’s most important client Bennett Chapman to Newport to update Bennett’s will in 1921.  Upon arrival, Adrian and Jim find themselves in an odd predicament.  Bennett is going to marry the much younger Catherine Walsh and wants to change his will to leave his immense estate to her.  Bennett’s two children, Nicholas and Chloe have showed up to dispute this and to question Bennett’s sanity.  Through séance’s led by Catherine’s young niece Amy, Bennett believes that his late wife Elizabeth Chapman is telling him to marry Catherine.  Adrian is stunned by that the normally rational Bennett would believe this, and is also shocked to see Catherine again after knowing her in his past.

The novel flashes back and forth between Newport in 1898 to reveal Adrian and Catherine’s past and then to the “present” story in 1921.  Although I guessed various parts of the story, I thought it was very unique.  I liked the format, but I thought the past story moved a bit slow.  I loved all of the characters, especially Adrian’s wife Constance, who played a very minor role in the story.  Morrow did such a great job of bringing the characters to life that I felt bereft when I finished the book.  I felt like this should be the start of a series set during the 1920’s and 1930’s with Adrian, Jim, and Constance working on various cases together.

Newport had great notes in the end, especially with author Jill Morrow giving background on séance’s during this particular time period.  I thought it was fascinating.  There is also insight into the elite of the day and a list of great book club questions.

Overall, Newport was an enjoyable and unique historical fiction novel set in the 1920’s and 1890’s with a great cast of characters.  I recommend it!

Book Source:  Review Copy from William Morrow – Thanks!
Posted by Laura's Reviews at 6:55:00 AM 2 comments: