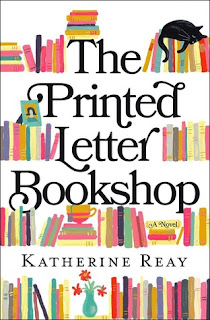 The death of a beloved aunt and friend, Maddie Carter, brings together three unforgettable characters at one special book shop.  Maddie has run this Northeastern Illinois bookstore for years and is a fixture of the community.  After her death, who will run the store?  Will this important part of the community survive?

Madeline Cullen loved her Aunt Maddie, but after a family rift twenty years before, she has not spent much time with her.  Her busy career as a lawyer trying to make partner in downtown Chicago has left her with zero time for anything outside of work.  Will Madeline make partner?  Is her career the most important part of her life?

Claire is a mother, who is experiencing empty nest syndrome with her teenage kids no longer needing her and her husband always at work. She gave up a successful career to stay home with her kids, but after a marriage filled with constant moves, Claire feels like she no longer knows herself. When she gets a job at the Printed Letter Bookshop, Claire feels like she has a purpose again.  Will Claire be able to reconnect with her family?  What will the future hold with the store in peril?

Janet lost everything when she cheated on her husband which led to her divorce.  She has strained relations with her adult children and her friends are gone.  Her brusque personality did not fool Maddie Carter and Janet started to work at the book shop.  How can she put the pieces of her life back together?  Will the artist within her be able to shine through?

I loved how all three women were able to not only work on saving the store, but also found themselves in this novel. The novel was about friendship, but also about forgiving others and working through problems.  What fulfills you in life and makes you happy?  I loved that Maddie left each women a letter with book recommendations that helped her on her journey.  I loved the discussion of books and many of my favorites were discussed. There is a great list of all of the books mentioned at the end of the novel.

I really loved that Claire’s previous career had been in math.  It’s nice to see math and technical careers represented for ladies in literature.

Basically, this book is my fantasy - giving up a high-powered career path to own a beloved local bookstore.  I loved it.

“But anger can be as irrational as it is visceral.”

Overall, The Printed Letter Bookshop is a wonderful book filled with great characters who all experience a life changing journey and its also filled with talk about great books.  I can’t beat that!

Book Source:  Review Copy as part of the TLC Book Tour.  Thank-you!  For more stops on this tour and information about this book, check out this link.
Posted by Laura's Reviews at 11:14:00 PM 4 comments: 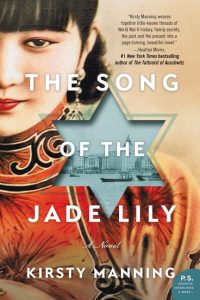 Did you know that Shanghai opened its doors to more than 20,000 refugees during World War II, a time when the majority of other countries would not let refugees in?  I did not and learned a lot by reading the riveting novel, The Song of the Jade Lily.

Romy is a young Austrian Jewish girl that is forced to flee her homeland with her parents after the Nazi’s brutally murder one of her brothers and send the other to a concentration camp in 1938.  Shanghai is the one place taking refugees without a Visa and the family is happy they are able to escape.  As Romy learns the new language and culture in the vibrant city of Shanghai, she befriends her next-door neighbor Li and her intriguing brother Jian.  She remains friends with Nina, a young Jewish girl who traveled over on the same ship.  As the Japanese start to take over the City and the war now invades their new home, will the family and friends survive?

In 2016, Alexandra is a stock trader in London who has returned to Australia for her grandfather’s funeral.  She has just had a bad breakup with her long-term boyfriend and is going to make a fresh start in the Shanghai office after the funeral. Knowing her mother was adopted from China, Alexandra wants to know to know more of her history.  As she tries to find what she wants in life and research her mother’s past, what family secrets will she uncover?

I LOVED this novel.  It was a fast paced and intriguing read that kept me reading too long into the night to see what would happen next.  It was a part of WWII history that I had never read about before and I thought it was very interesting.  I loved that the story was a great story of family, friendships, and love and what they all mean in times of trial.

I also enjoy narratives that have two different viewpoints, one in the past and one in the present that intersect.  I love that Alexandria was able to finally understand and learn the truth about her grandparents.

Favorite Quote:
“We can’t choose what happens to us.  But we can choose how we respond.”

Overall, The Song of the Jade Lily is a fascinating drama that delves into an overlooked part of history.

Book Source:  Review Copy as part of the TLC Book Tour.  Thank-you!  For more stops on the tour, check out this link.

About The Song of the Jade Lily

• Hardcover: 480 pages • Publisher: William Morrow (May 14, 2019) “Kirsty Manning weaves together little-known threads of World War II history, family secrets, the past and the present into a page-turning, beautiful novel."— Heather Morris, #1 New York Times bestselling author of The Tattooist of Auschwitz A gripping historical novel that tells the little-known story of Jewish refugees who fled to Shanghai during WWII.

1939: Two young girls meet in Shanghai, also known as the “Paris of the East”. Beautiful local Li and Jewish refugee Romy form a fierce friendship, but the deepening shadows of World War II fall over the women as they slip between the city's glamorous French Concession district and the teeming streets of the Shanghai Ghetto. Yet soon the realities of war prove to be too much for these close friends as they are torn apart.

2016: Fleeing London with a broken heart, Alexandra returns to Australia to be with her grandparents, Romy and Wilhelm. Her grandfather is dying, and over the coming weeks Romy and Wilhelm begin to reveal the family mysteries they have kept secret for more than half a century. As fragments of her mother's history finally become clear, Alexandra struggles with what she learns while more is also revealed about her grandmother's own past in Shanghai. After Wilhelm dies, Alexandra flies to Shanghai, determined to trace her grandparents' past. Peeling back the layers of their hidden lives, she is forced to question what she knows about her family—and herself.

The Song of the Jade Lily is a lush, provocative, and beautiful story of friendship, motherhood, the price of love, and the power of hardship and courage that can shape us all.
. 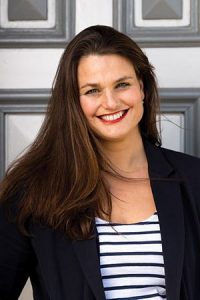 Kirsty Manning grew up in northern New South Wales, Australia. She has degrees in literature and communications and worked as an editor and publishing manager in book publishing for over a decade. A country girl with wanderlust, her travels and studies have taken her through most of Europe, the east, and west coasts of the United States as well as pockets of Asia. Kirsty’s journalism and photography specializing in lifestyle and travel regularly appear in magazines, newspapers, and online. She lives in Australia. Find out more about Kirsty at her website, and connect with her on Twitter, Instagram, and Facebook.
Posted by Laura's Reviews at 12:20:00 PM 5 comments:

The Trial of Lizzie Borden by Cara Robertson 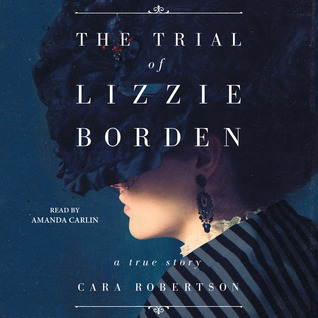 Lizzie Borden had an ax.  Gave her mother forth whacks.  When she saw what she had done, she gave her father forty-one.  I think we have all heard the famous nursery rhyme, but who is the woman behind it?  Who was Lizzie Borden?  What exactly was the crime?  And why was she let go after her trial?

This audiobook went through the history of the family, the crime, and all of the particulars of the trial.  I had not read about the trial previously.  I was amazed that in that day, the fact that Lizzie was having her period at the time, could be considered as a cause of her killing her father and stepmother as everyone knew that women on their period were libel to go into a crazed rage.  The other point that seemed to make people think Lizzie was the killer was because she had complete control of her emotions and didn’t break down into feminine tears too often.  I saw this for myself when a murder was committed in my home town.  The suspected murderer’s facial expressions and the way he acted was enough to condemn him in the eyes of the locals.  Lizzie had the same problem.  I am good at controlling my emotions as well and may not break down after a sad event until days later by myself.  If I were Lizzie, they would have condemned me for the lack of emotion as well.

As it has been hotly debated for over 100 years, I am still not certain myself if Lizzie was guilty or not.  The audiobook did a wonderful job of presenting all of the facts both ways, but did not give an opinion on her guilt.  Was it someone else?  Why did Lizzie act so peculiar when questioned?  I guess we’ll never know.

I must admit, I did not like the narrator of this audiobook.  Her voice sounded to me almost like a robot voice, I thought at first that Siri was narrating the book.  I realized her voice just had a strange cadence.  I feel bad that it bothered me, but it did.  Luckily the story was intriguing enough to keep me tuned in.

Overall, The Trial of Lizzie Borden is fascinating history.
Posted by Laura's Reviews at 7:25:00 PM 2 comments: