Christmas on the Island by Jenny Colgan 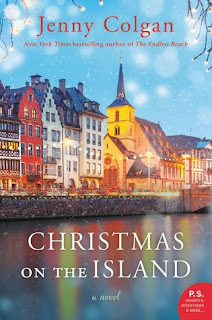 On the beautiful northern Scottish island of Mure, our favorite characters find themselves in the midst of trouble. Flora has found out she’s pregnant, but she’s afraid to reveal the truth to her boyfriend Joel.  Joel had a troubled childhood and they’ve never discussed starting a family of their own.  Meanwhile Flora’s brother Fintan has finally come out to his family and has married the love of his life, American billionaire Colton.  Unfortunately, Colton has cancer and his prognosis is not good.  Colton is estranged from his family because of their treatment of him over his lifetime, but his brother Tripp has arrived on Mure to check on him after seeing troubling reports in the news.  Will Colton be able to forgive his family?

Flora’s best friend Lorna is in love with Saif, a doctor and Syrian refugee.  Saif lives on the island and has newly been reunited with his two young sons, but his wife is still missing after two years.  Waiting for her and not knowing drives Saif to distraction.  He grows close to Lorna and begins to have feelings for her – but is his wife still alive?  Will Saif’s inner conflict tear him apart?

I love how the novel started with farm dog Bramble ambling around the island observing everyone and ended the same way.  I love Bramble and it made for an interesting way to start and conclude the novel.  I am a great fan of character novels and Jenny Colgan knows how to write compelling characters.  I feel fully vested in these characters from the last two novels and I hope that Colgan continues the journey on Mure with another novel.

The novel is set at Christmas time, but does contain characters and their dilemmas from the previous two novels.  I would recommend reading the first two books before you read Christmas on the Island.

I enjoy that modern twists are in the story such as getting into the plight of Syrian refugees and having a compelling love story between the first gay couple to marry on the island of Mure, Fintan and Coltan.  This was a tragic end to their love story, but I love how it brought in Colton’s broken family and some of his back story.  I wish they could be the heroes of their own book.

Favorite Quote:
“But otherwise this was his vigil:  he would stand watch.  Until the end.  The beautiful house was his prison, and he was his own guard.”

Overall, Christmas on the Island is a compelling novel with great characters.  I recommend reading it as a third book in the series and not on its own. 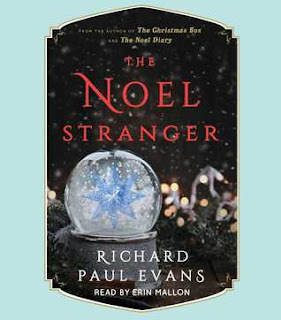 It’s not Christmas without Richard Paul Evans’s latest Christmas tale.  The Noel Stranger is excerpts from Maggie Walther’s Diary that tell a story of a woman who has her life shattered and her attempt to pick up the pieces.  Maggie owns a successful catering company and helps her politician husband entertain with style.  Her world is devastated when it is discovered that her husband Clive is a bigamist and he has another wife in Colorado.

Maggie doesn’t know how to get out of her slump, but her best friend helps her to get out of the house and moving again.  She goes to get a Christmas tree and is immediately smitten by the owner of the Christmas tree lot, Andrew.  Maggie and Andrew go on a date and he asks her to accompany him for Thanksgiving to Mexico for vacation at a friend’s Condo.  Maggie says yes, and they are off on the adventure of a lifetime.  When Maggie discovers that Andrew has secrets from his past, will their relationship survive?

My stranger danger senses went off for this book.  I found it unbelievable that Maggie would leave the country with a virtual stranger.  It also seemed unbelievable that the stranger would be okay with separate bedrooms but would spend a great deal of money on you. It read like the fantasy someone would have where a rich stranger would show up and pay for the adventure of a lifetime, but it wasn’t very realistic.

That being said, I did enjoy listening to the book until the end.  Maggie became clingy and needy, and I didn’t understand her motivations.  She deserved better. I didn’t feel the love between Maggie and Andrew, and it seemed to me like Maggie was getting herself into another bad situation. The ending of the book really ruined this story for me.  I can’t say more without ruining the book!

Erin Mallon is a fine narrator, but she does have a strange inflection at the end of sentences that bothers me.  I feel rather petty saying that, but I do want to be honest about how I felt while listening to the audiobook.

Overall, I’ve enjoyed Richard Paul Evans other books in the Noel series, but I would skip The Noel Stranger and read his previous works if I had to do it over again.
Posted by Laura's Reviews at 9:19:00 PM No comments: 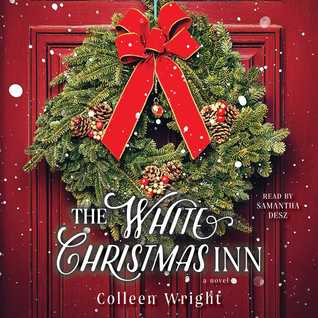 Are you a fan of Hallmark Christmas movies (or their cousins on Netflix)?  Then you will be a fan of White Christmas Inn by Colleen Wright.

Jeanne and Tim own and run the historic Evergreen Inn in Vermont.  Times are tough for the two and they are not sure how they are going to keep the inn open.  The new Starlight hotel and ski lodge has opened nearby, and it is the destination for most travelers coming to the area.   Will Jeanne and Tim be able to find a way to save Evergreen Inn?

For this Christmas season, Jeanne and Tim are hosting past frequent guest Hannah, for her Christmas wedding.  When the groom decides to call it off last minute, Hannah must decide what she really wants in life.  Will her childhood friend Luke help her to remember who she used to be as an independent person?

Molly is not part of the wedding party, but she is a famous children’s author and has come to the Inn to help her with her writer’s block.  After a blizzard shuts down all the roads, the Inn inundated with visitors who can’t make it to the Starlight.  Molly soon is sharing a room with two precocious girls with their attractive father widower father Marcus staying on the lobby couch.  Will Molly be able to find her creativity again?

I really liked how this novel told the stories of a variety of different characters from their perspectives.  They are all having troubles at Christmas, but they learn that love, laughter, and friendship can make any Christmas bright and happy.  I always love novels with great characters and I thought this one had that in abundance.  I loved all their stories and how each story was tied up perfectly.  I wish there could be a spin-off of this novel to see where everyone is in one year just because I loved the characters so much, but it did have a perfect ending as it was.

Samantha Desz was a good narrator of this audiobook and it was enjoyable to listen to on my work travels.  I found myself sitting in my car when I got home to keep listening to the story!

Overall, White Christmas Inn is a delightful Christmas novel with a heartwarming story and a great cast of characters.
Posted by Laura's Reviews at 4:36:00 PM 3 comments: