I’ll Be Home for Christmas by Lori Wilde Spotlight, Review and GIVEAWAY! 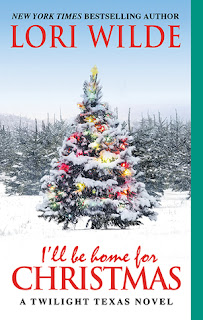 Gabi Preston was looking for an escape from her life and she found it during the Christmas season in Twilight Texas.  After meeting Katie Cheek on Pinterest, the two strike up an electronic friendship.  Gabi is having a crisis and is dropping out of law school, while Katie has lost her boyfriend and her job.  The two both love the movie, The Holiday staring Kate Winslet and Cameron Diaz and they are inspired to swap lives similar to the movie.  Once in Twilight, Texas, Gabi discovers that there are complications to living Katie’s life. Number one is that Katie lives in a yurt and number two is Katie’s very attractive brother Joe who lives next door.
Joe is having a crisis of his own.  He is helping to take care of the family Christmas tree farm while his Grandpa is in the hospital, but he has never been good at settling down.  After having his heart broken when his first wife told him that his daughter was not actually his daughter and left him for the child’s biological father, he has never stayed long with one woman.  When attractive California native Gabi moves next door into his sister’s yurt, Joe starts to wonder if he can give love a try and find something that is lasting.

I LOVE Christmas romance novels.  This is a good Christmas romance novel, the kind you want to cuddle up with by a fire.  I adored both of the lead characters and their journeys to self-discovery and love.  I also enjoyed the setting of Twilight Texas.  I have not read any of the other novels in the Twilight Texas series, but I appreciated the small town setting where everyone knows each other and is passionate about Christmas.  The passion extends to even townspeople dressed as characters from Dickens novels. 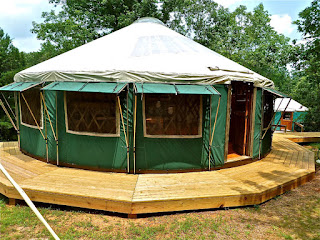 I also enjoyed that I know what a yurt is now from reading this book!
Book Source:  Review Copy from HarperCollins – Thanks!

About the Book
Nothing says Christmas like New York Times bestselling author Lori Wilde and Twilight, TX, and now Lori returns to Twilight for a brand new heartwarming holiday tale. The matchmaking members of the Cookie Club are up to their old tricks again!

Christmas in Twilight, Texas, is all merriment and mistletoe. The Cookie Club is whipping up their most festive sweets, the townspeople are scrambling to get their holiday shopping done, and Joe-a hometown guy with a restless heart-is dreaming about the woman he wants to kiss most…

…And who happens to be staying at his sister’s place over the holidays, while Joe’s sister is away. But Joe isn’t quite sure he wants to be a living Christmas present to runaway law student Gabi Preston.

Joe thinks the sassy sweetheart he nicknames “Trouble” won’t inconvenience anything but his healthy sex drive. But when he discovers the reasons Gabi escaped from her life, he aches to give her everything she’s never had. As the magic of the season draws them together, the gift of love is the only one worth giving…

About the Author
New York Times and USA Today best-selling author, Lori Wilde has sold seventy-eight works of fiction to four major New York Publishing houses. She holds a bachelor’s degree in nursing from Texas Christian University and a certificate in forensic nursing from Kaplan University. She is a member of the International Association of Forensic Nurses.

Her first NYT bestseller, the third book in her Twilight, Texas series, The First Love Cookie Club has been optioned for a television movie. The town of Granbury, Texas, upon which her fictional town of Twilight, Texas is loosely based, honors Lori with an annual Twilight, Texas weekend each Christmas. www.twilighttexas.com

A popular writing instructor, Lori is a two time RITA finalist and has four times been nominated for Romantic Times Reviewer’s Choice Award. She’s won the Colorado Award of Excellence, the Wisconsin Write Touch Award, The Golden Quill, the Lories, and The More than Magic. Her books have been translated into 27 languages and excerpted in Cosmopolitan, Redbook, Complete Woman, and Quick and Simple magazines. She lives in Texas with her husband, Bill, and her two New American Shepherds.

Praise for LORI WILDE
“Tempered with love, a caring community, a dash of suspense, and the romantic delight of a Twilight Christmas, this engaging story brims with strength and hope-definitely one to savor.”    — Library Journal on CHRISTMAS AT TWILIGHT  “Christmas at Twilight is a wonderful heartwarming story not to be missed. The characters are written with compassion as the love between the couple grows.”    — RT Book Reviews (4 Stars) on CHRISTMAS AT TWILIGHT  “Lori Wilde has created a rich and wonderful story about the charm of small town life combined with the power and passion of first love. Delicious!”    — Robyn Carr on A Cowboy Christmas

“A wonderful story… The ending will leave readers with the desire to make return visits to Jubilee, Texas.”    — RT Book Reviews, 4 stars, on Love at First Sight  “A pair of engaging protagonists, a wealth of wacky townsfolk, and a mystery with a dangerous twist add up to a charmingly sexy tale that will leave fans smiling.”    — Library Journal on Love at First Sight

“[T]heir personal development forms the heart and soul of the novel, a delicately revealing in-depth character study. Wilde’s clever combination of humor, sorrow and love brings a deeply appealing sense of realism.”
— Publishers Weekly on All of Me


a Rafflecopter giveaway
Posted by Laura's Reviews at 3:57:00 PM 4 comments: