I’m Your Huckleberry by Val Kilmer 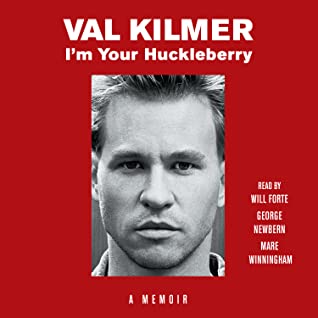 I’ve been a fan of Val Kilmer’s since I was young and have enjoyed so many of his movies – Top Gun, Willow, Tombstone, Batman:  Forever, Real Genius, The Saint, etc.  Memories of these movies take me back to different points of my life.  I was excited to be able to review his memoir.

I was not disappointed.  This was an interesting look into Kilmer’s life.  He was very candid and talked about playing the rolls in his most iconic movies, the (many) loves of his life, his travels, his philosophy, his youth, his marriage, his cancer diagnosis, and more.  The reflections were not in chronological order but were on the whim of what he wanted to talk about at that time.  They did seem to all piece together perfectly.  I was pleasantly surprised to learn of his deep faith and his lifelong following of Christian Science.

My favorite story in this audiobook was right at the start.  I didn’t know that Val Kilmer was Cher’s boyfriend in his youth, and they have remained friends since then.  Val was living in a cottage on Cher’s estate after he was diagnosed with cancer.  He had a medical emergency and an ambulance was called.  Cher was with him as he was taken away and then he noticed her checking out the paramedic. He made eye contact and Cher shrugged.  It was very humorous.

I liked Kilmer’s honesty in his book and his reflections on growing older, relationships, and mortality.  I thought it was interesting that there were three different narrators and they would alternate between different sections of the book.

Overall, I’m Your Huckleberry is an enjoyable, refreshing, and at times humorous memoir.
Posted by Laura's Reviews at 7:00:00 PM 1 comment:

My Life as a Villainess by Laura Lippman

I love Laura Lippman’s mystery novels.  This book arrived last week. I had just finished reading a heavy novel and decided I was going to read this to lighten my mood.  I started reading it and couldn’t put it down until I was finished.

My Life as a Villainess is a collection of essays by Laura Lippman talking through different issues and thoughts in her life.  Lippman may be a New York Time selling author married to the producer of The Wire, but I’ll admit, I related to her in her essays.  Our daughters are the same age and many of the items she discussed about her Georgia Rae were similar to my Penelope Rose.  Lippman is an older mother and I liked her discussion about the trials, tribulations, and judgements as an older mother.  I am a middle of the road mother on age.  I also related to her discussion of reading books at the Waldenbooks at her mall growing up.  My Mom worked at PearleVision in the mall when I was growing up.  I would go to work with her as a tween/teen during the summer or weekends and spend my day roaming the mall.  A large part of my time would be spent at B. Dalton.

Lippman’s essays varied and discussed different times in her life.  I loved the story of her first job in Texas as a journalist, as well as her frank discussions about both of her husbands.  There were so many memorable moments.  I enjoyed how she took over her father’s bar where he would go for afterwork drinks.  Lippman looked inward for her essays and realized that at times she wasn’t a good person, hence the “villainess” of the title.  I like that she was proud of who she is, although I looked at her picture when she kept saying she was fat and was very confused.  She looks great – but your family can always find a way to make you not feel good about your body image as I well know. Each and every essay was an interesting look into Lippman’s thoughts and life, and I enjoyed them.  I hope she writes more essays.

Favorite Quote:
“She conceded this was basically true, but also told me that I must stop writing ‘happily ever after’ at the end of my friends’ stories.  People’s stories are never finished, not as long as they’re alive.  They don’t even end with death.”

Overall, My Life as a Villainess is an enjoyable set of essays that give you a glimpse into Laura Lippman’s life.