A Discussion with Ciji Ware, author of A Light on the Veranda (and GIVEWAY!) 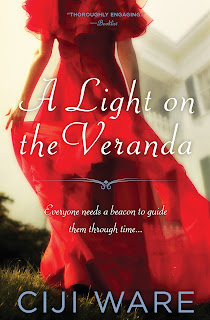 Did you always have a sequel planned for Midnight on Julia Street?
Julia Street’s sequel came about for one simple reason: my editor, as soon as she reached the last page of that book, called me and demanded to know, “What ever happened to the young woman in Chapter One who blew off her wedding in front 500 guests in New Orleans’ St. Louis Cathedral? Did she ever dare show her face again down South?
I stammered, “Uh….I don’t know…ah…let me see…she went back to New York with her tail between her legs and—“

The editor interrupted with, “Well, you have to let us know the fate of that poor girl! Bring her back to New Orleans!”

However, I didn’t want to do a second book set in the same historic city, and a wonderful writer friend of mine, Michael Llewellyn who lived in New Orleans then, was working on a novel based on a real-life mystery he called The Goat Castle Murder (which is being published this year, by the way).

“Why don’t you set Daphne’s story in Natchez, Mississippi—the Town That Time Forgot? It’s three hours due north of New Orleans. We two could have a blast researching it up there at the same time.”

And so, the sequel, A Light on the Veranda was born! (And we did have a blast researching and writing both books!).

What in particular drew you to Daphne as a character? I’ve always been interested in what I call “cross-road moments”—moments when decisions are made that, looking back, mark an entirely new path for the decision-maker. In the case of Daphne Duvallon in A Light on the Veranda, she had been a minor character in Midnight on Julia Street, appearing in Chapter One, and then disappearing for the rest of that book…but what a role she’d played!

She had been forced by circumstances to decide in a split second in front hundreds of New Orleans’ movers-and-shakers at the “Wedding of the Season” whether to bind her life to a man whose eleventh-hour betrayals proved that he definitely did not have her best interests at heart. What drew me to her even more was that she had the courage to run out of that church, even though the wedding cost many thousands of dollars and her parents had planned for her to marry Jack Ebert since Daphne and he were toddlers.

Years ago a close friend of mine, then in his late twenties, described to me in chilling detail the dread he felt on his wedding day watching his bride walk toward him down the aisle. Horrified, I remember asking him, “But why did you get engaged in the first place?” He looked at me with a sad smile, “Well, we were seniors in college and it was either get married or break up. I just sort of drifted into what everyone in both our families expected of us.” But couldn’t you, I persisted, have gotten out of it between the time you got engaged and the actual wedding?” He pointed to the table setting in front of us at the restaurant where we were having dinner. “The day after we told her parents we‘d gotten engaged, her mother ordered a huge set of silverware engraved with my initial. Hey, I was twenty-one years old…I just couldn’t bring myself to call it off.”

The fact that Daphne had the guts to explain from the very altar why she couldn’t go through with the ceremony filled me with admiration and made me want to explore her story further.

Will there be any “time slips” in this novel?Oh, yes indeed! In fact, in both A Cottage by the Sea, and Midnight on Julia Street I had been thoroughly caught up exploring the idea of what I termed “genetic memory” and the possibility that the emotional effects of traumatic events that may have happened to one’s ancestors could echo down through the centuries, affecting the lives of their descendants many generations removed. Since I decided to send Daphne from her refuge in New York City back to her southern roots, what better place than Natchez, Mississippi –known as The Town That Time Forgot”—to continue the idea of a modern woman mysteriously uncovering startling events had happened to her namesake ancestress that had eerie parallels in her own life? Whereas in Cottage, the trigger that catapulted the heroine back in time was the sense of touch and in Julia Street, the sense of smell, in Veranda, every time Daphne hears certain sounds—especially music--back she goes to the 1840s when Cotton was King.

What was your inspiration for the Duvallon family?
I’ve been going to New Orleans since I was ten-years-old (supposedly I had ancestors there in the 1840s who were, in the words of my late Great Aunt Marge, “run out of town on a rail”), but in the 1990s I had an idea to do another time-slip novel set in a southern American city that had ancient ties with Europe, and the Big Easy seemed to fit the bill perfectly.

When I arrived there, through friends of friends, I met several people whose families had been part of the fabric of that amazing place for generations. One of my “guides” was kind enough to show me the stunning, palatial house in the famed Garden District where he’d grown up, as well as the lovely country place on the edge of a bayou that the family still owned. As we talked, I heard a tale of generations that had, on one hand, been leaders in society, business, and government in Louisiana, and yet had produced nothing but tangled, unhappy relationships--along with dark, well-kept family secrets—all of which had resulted in decades of misery and misunderstanding. Very gothic it all seemed to this westerner, born and bred in sunny California, and but utterly compelling and fascinating. And thus the convoluted Duvallon clan was born. You’ll meet them all in the new release of A Light on the Veranda. 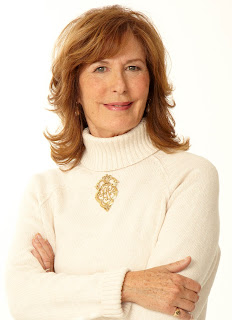 I’ve enjoyed this discussion very much, so many thanks for the invitation to visit with you! I welcome readers and visitors at www.cijiware.com. You can also connect with me at http://www.facebook.com/pages/Ciji-Ware-Novelist/102621349810555


Thank-you for stopping by Ciji Ware!  I loved your answers and have enjoyed reading your novels!

Sourcebooks has graciously offered a giveaway of one copy of A Light on the Veranda by Ciji Ware.

If you would like to win a copy of this book please leave a comment about what intrigues you about the this book or this discussion with Ciji Ware.

The deadline for entry is midnight, Friday March 30th, 2012.