Never Have I Ever by Joshilyn Jackson 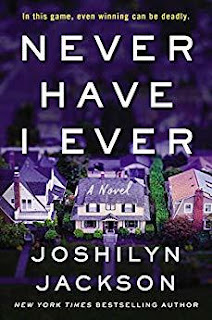 I was looking for a good suspense novel recently. I picked up Never Have I Ever by Joshilyn Jackson and I couldn’t put it down!!

Amy Whey loves her life.  She has finally married the love of her life together and they have an infant son and a teenage stepdaughter.  She also loves helping her best friend Charlotte with her neighborhood book club.  Charlotte takes this seriously and is very excited to talk about The House of Mirth.  Unfortunately, an enigmatic new neighbor Roux shows up and takes over the meeting.  Roux is mysterious and exciting. She has a gift to get everyone to talk about their secrets, especially when they start an adult version of the game Never Have I Ever.  Roux then uses the secrets to her advantage.  Will Amy be able to beat Roux at her own game and keep her secrets without destroying her family?

I just loved this book.  I loved how I thought I knew what was happening, only to have the rug pulled out from under me, and a giant change come to the story.  There were a few different times that happened in the book and I just couldn’t stop reading it.  I was very vested in the story and I loved the way it ended.  I was also really vested in the characters of Amy and Roux.  I wanted to know more about them and how they became the women they were.  I especially loved Amy.  She was a flawed woman, but she was trying to repair her life and do good.  It was a very interesting story.  I did start to piece together the ending, but it did surprise me overall.

Favorite Quotes:
“It’s a blast.  You should play.  It’s like Never Have I Ever, but for grown-ups.  We skip the coy denials and go right to confession.  You start by telling everyone the worst thing you did today.”

“People say, I don’t know how she lives with herself, but every single one of them was living with their own worst thing, just fine.  No one walks around holding their ugliest sin in the palm of their hand, staring at it.  Our hurts are heavy, and we let them sink.  Every day they drift lower, settling in murky places where the light can’t reach."

Overall, Never Have I Ever is a thrilling suspense novel that kept me hooked into the story.  I loved the two main characters and was vested in their story.  I highly recommend this for anyone looking for a story that you can’t put down!

My son Daniel received this book at school from generous donors who gave a book to each of the kids in his class each month of the school year.  This has opened Daniel up to different books that he may not have chosen on his own.
I read Holes ten plus years ago for a book club and enjoyed it.  Daniel has not read Holes yet, but heard he will be reading it school so he is waiting for his class to read it.  Small Steps is a completely separate story with a couple of the characters from Holes.  It was okay that Daniel had not read Holes, in fact this increased his interest in wanting to read it.

It has been two years since Armpit has been released from Camp Green Lake.  He lives in Austin, Texas and is trying to live a better life.  He does have a record and people sometimes assume the worst of him.  He works for a landscaper and is doing a good job and has a great friend in Ginny, his ten-year-old disabled neighbor.  X-Ray, a friend from Camp Green Lake, comes up with a great plan for the two to make money.  They will use Armpit’s savings from his landscaping job to buy tickets to pop star Kaira DeLeon’s concert and scalp them.  Will this work out for the two of them?  Armpit attends the concert with Ginny and everything changes for him in an instant.

I’ll admit, Daniel was very disturbed by the scalping scenario and didn’t want to read the book for awhile as he was afraid that Armpit was going to get into trouble.  Once we got through that, Daniel was really into the book and we read through the rest of it quickly.  Daniel really liked Armpit and that even though he had a past, he was trying to do what was good and right for his friends.  He was taking “small steps” to try to make his life better and that really resonated with Daniel.  “He told her about the advice the counselor at the halfway house had given to him.  The important thing was to take small steps and just keep on moving forward. ‘Life is like crossing a river.  If you try to take too big a step, the current will knock you off your feet and carry you away.’”  This was very thoughtful advice that Daniel took to heart.

The other part that really got Daniel thinking happened at the concert.  Young Ginny has a seizure and seeing her with a large African American older boy (Armpit), the authorities immediately start to manhandle Armpit and believe that he has harmed Ginny.  Daniel was very disturbed by the way Armpit was treated and it led to a good discussion between us about current events and how African Americans are not always treated with the dignity and respect that they deserve as human beings.  It really gave Daniel a lot to think about.

Armpit’s story goes in a different direction at this point where he is able to meet Kaira DeLeon and becomes embroiled in a scheme that tries to use his past to frame him.  Most of the chapters are told from Armpit’s point of view, but some are told from Kaira DeLeon’s point of few showcasing her loneliness within the world of show business.  While there was some light romance, Daniel still really enjoyed the book. He was very much invested in Armpit as a character and reading his story.

Overall, Small Steps was a gem of a book.  It was a great book to read with my twelve-year-old son.  We talked about racism in America and judging people by the content of their character.  People can make mistakes in life and they can make small steps working towards a better future.  I enjoyed this book and I highly recommend it.