Where Are the Children by Mary Higgins Clark 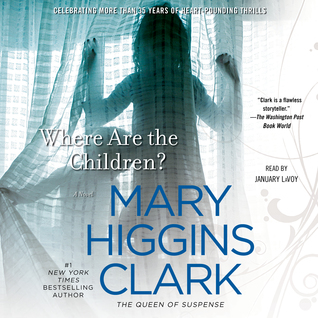 I first read this classic masterpiece of suspense when I was in high school and was hooked on Mary Higgins Clark’s books.  I’ve read several in the years since I read this book and had a chance to listen to Clark speak in Milwaukee about fifteen years ago.  I was excited to be able to read it in a new format, audiobook, and revisit it.  It’s been so long since I’ve read it, it was almost like reading a new book again.

Nancy Elderage has a loving husband Ray, and two young children, Missy and Michael.  As her birthday approaches, Nancy grows fearful as she does every year.  Years before, she was known as Nancy Harmon and was married to professor and had two small children, Peter and Lisa.  On her birthday Peter and Lisa went missing and were later found washed up on shore.  Nancy has moved cross country with a new name, dyed hair and has started a new life after her acquittal for the murder of her children. Ray knows of her past but has a moment of doubt when Missy and Michael go missing on Nancy’s birthday.  Where are Missy and Michael?  Could Nancy be a killer after all?

I enjoyed listening to this audiobook.  January LaVoy was a fabulous narrator who gave a voice to each character.  The plot was tight and intense.  The book was written and set in the 1970’s and it was interesting to see how much has changed since that time when it comes to crime, sadly.  It was very nail biting at the end and I was on the edge of my seat.  I felt that way as a teenager reading it, but even more now so as a mother.

Overall, Where are the Children is a classic mystery and makes a wonderful audiobook to keep you on the edge of your seat.
Posted by Laura's Reviews at 2:31:00 PM 3 comments:

Dork Diaries 13: Tales from a Not So Happy Birthday by Rachel Renee Russell 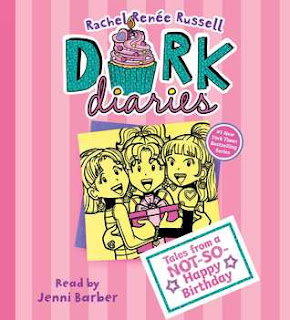 My eight-year-old daughter Penelope is a fan of the Dork Diaries.  They are a bit above her on reading level, but we enjoy reading them together.  We have finished the first novel, and are working on the second, but I jumped at the chance to review number thirteen.  Penelope was annoyed to be skipping ahead, but she enjoyed listening to the audiobook whenever we had a trip in the car. My ten-year-old son may have enjoyed listening to it as well when he was on short trips with us, although he would denied it if asked.

Dork Diaries 13:  Tales from a Not So Happy Birthday finds our heroine Nikki trying to plan her epic birthday party with her best friends Chloe and Zoey.  A series of unfortunate events seems to plague the trio during their party planning including realizing that their expectations does not meet Nikki’s family’s budget for the event.  They are able to work through these problems with the unexpected help of Nikki’s little sister, Brianna.  Nikki also tries to figure out how to make things work with her boyfriend Brandon for the summer with the two of them spending time in different places.  Will Nikki’s birthday be a blast or a bust?

Jenni Barber was a great narrator and really seemed to inhabit Nikki’s character.  Penelope was very engaged in the plot and wanted to know whether Nikki was going to be able to have her party or not.  We both were very amused by the humor in the book.  Penelope especially loved the light romance between Brandon and Nikki.

Overall, Dork Diaries 13 was a funny audiobook and kept me and my eight-year old daughter entertained on our car trips.  It was fun to discuss the book with her after we got done listening to it.
Posted by Laura's Reviews at 6:11:00 PM No comments: 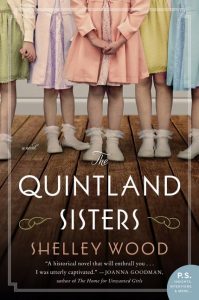 The Quintland Sisters is a fascinating look into the lives of Canada’s famous Dionne quintuplets.  Born in the midst of the great depression, the Dionne quintuplets soon became a public obsession that lifted the public’s spirits during trying times.  But at what cost to the girls?

Emma Trimpany is a seventeen-year-old local girl who attends the birth of the Dionne quintuplets with the midwife to learn the trade.  Madame Dionne did not know she would have five babies and Emma did not realize she was now a part of an extraordinary event.  As she works to keep the five tiny infants alive, she becomes a caregiver through the years as the Canadian government takes them from their parents and raises them in a nursery across the street where they are put on the display for tourists.  Emma keeps a diary of the strange events and also draws the girls as they grow.  Does the family or the government have the best interest in the girls at heart?  Who should raise the girls?

I had heard of the Dionne quintuplets, but I learned a lot in this novel, which overall, made me sad.  The story ends with their visit to the queen as children and has a bit of a fast forward to when they are in their twenties.  The novel left me thirsting for more information on the girls.  Luckily at the end of the novel, Wood had an excellent author’s note and question and answer section that gave more information on the them.  I was sad to hear that there isn’t much left when you visit where they grew up in northern Ontario.  I was also intrigued that they were five identical babies as I didn’t realize that before.  There still has not been a set of identical quintuplets that has made it to adulthood besides the Dionnes, which is an amazing feat.

I enjoyed Emma’s story.  I really liked the story of a woman trying to find her place in the world in the 1930’s.  There were harsh realities of that time that were hard to live through.

The novel is told as Emma’s first-person diary entries with news articles (mostly real, some edited) interspersed throughout the entries to give a fuller account.  Emma is a fictional person in a real world, but her story itself was quite tragic.  I got to the end and had to just sit in quiet for awhile I was so distressed.

Overall, The Quintland Sisters is a fascinating look into tragic story of the Dionne Quintuplets and the life of women in the 1930’s.

Book Source:  Review Copy from William Morrow Books for being a part of the TLC Book Tour.  Thank-you!  For more stops on this tour, check out this link.

• Paperback: 464 pages • Publisher: William Morrow Paperbacks (March 5, 2019) "A historical novel that will enthrall you... I was utterly captivated..." — Joanna Goodman, author of The Home for Unwanted Girls For fans of Sold on a Monday or The Home for Unwanted Girls,Shelley Wood's novel tells the story of the Dionne Quintuplets, the world's first identical quintuplets to survive birth, told from the perspective of a midwife in training who helps bring them into the world.

Reluctant midwife Emma Trimpany is just 17 when she assists at the harrowing birth of the Dionne quintuplets: five tiny miracles born to French farmers in hardscrabble Northern Ontario in 1934. Emma cares for them through their perilous first days and when the government decides to remove the babies from their francophone parents, making them wards of the British king, Emma signs on as their nurse.

Over 6,000 daily visitors come to ogle the identical “Quints” playing in their custom-built playground; at the height of the Great Depression, the tourism and advertising dollars pour in. While the rest of the world delights in their sameness, Emma sees each girl as unique: Yvonne, Annette, Cécile, Marie, and Émilie. With her quirky eye for detail, Emma records every strange twist of events in her private journals.

As the fight over custody and revenues turns increasingly explosive, Emma is torn between the fishbowl sanctuary of Quintland and the wider world, now teetering on the brink of war. Steeped in research, The Quintland Sisters is a novel of love, heartache, resilience, and enduring sisterhood—a fictional, coming-of-age story bound up in one of the strangest true tales of the past century.. 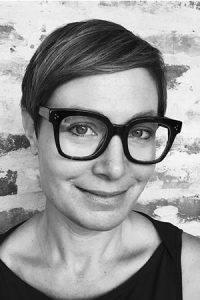 Shelley Wood is a writer, journalist, and editor. Her work has appeared in the New Quarterly, Room, the Antigonish Review, Causeway Lit, and the Globe and Mail (UK). Born and raised in Vancouver, she has lived in Montreal, Cape Town, and the Middle East, and now has a home, a man, and a dog in British Columbia, Canada. Find out more about Shelley at her website, and connect with her on Facebook, Instagram, and Twitter.
Posted by Laura's Reviews at 6:07:00 PM 7 comments: