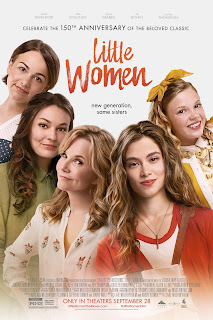 I have loved Little Women since I was a child.  I used to watch a cartoon version that I realized when I became an adult was a Japanese Anime version.  I also watched every movie version that existed and read the book numerous times.  I love Little Women and Louisa May Alcott.

I was excited to be able to preview the new movie, Little Women, that will be in theatres this Friday.  It stars Lea Thompson from Back to the Future as Marmee and sets the iconic story in modern times.

I’ll admit that I have not only read a modern take on Little Women in the past but have also watched another modern movie take on Little Women. Both ventures failed as they missed the essences for what makes Little Women a great story.  I’m happy to report that I really enjoyed this new version of Little Women.  It did a fantastic job of modernizing the story.  The March Patriarch is away in the military to explain his absence and Marmee is still a wonderful mother who cares for the downtrodden.  The girls have their personalities intact and updated slightly for modern times.

What I loved the most was that the set-up of this movie solved one of the essential woes I’ve always had with Little Women – you love Laurie and want him together with Jo only to have Professor Bauer appear out of left field at the end of the novel or movie.  In this 2018 production, Professor Bauer is introduced before Laurie and it works wonderfully.  Jo is an aspiring author of fantasy fiction and Professor Bauer is trying to help her out with her writing while their relationship develops.  Flashbacks tell the story of the March family as Jo was growing up and Laurie is introduced at this time. He had more of a dorky brother vibe while Professor “Freddy” Bauer was obviously more the love interest.  I LOVED this set up.

This is a Christian movie and I was glad to see that the March sisters weren’t made into “slut sisters” as I’ve seen in other modern takes.  I watched this with my ten-year-old son and seven-year-old daughter.  There is alcohol consumed at a party and some bad behavior, but my kids realized it was bad behavior.  It was in keeping with the original novel as Meg was from a temperance family and does drink at a party.

Overall, this 2018 version of Little Women does an excellent job updating the story to modern times, while keeping true to the original characters.  I highly recommend it!

In theaters this fall, LITTLE WOMEN—starring Lea Thompson (BACK TO THE FUTURE) —brings the same sisters to a new generation to celebrate dreams, family and unconditional love. 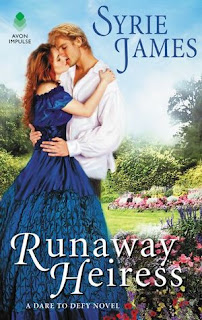 I’ve enjoyed historical fiction novels from Syrie James in the past and was delighted to have a chance to review her new historical romance, Runaway Heiress.  Runaway Heiress is a Victorian historical romance involving the American invasion of heiresses to England trying to snag a titled husband.  Think Cora from Downton Abbey or all the ladies in The Buccaneers by Edith Wharton.

Alexandra Atherton has attended college in America and wants an independent life full of learning.  Her mother has other plans and has brought her to England to use her father’s wealth to lure a titled husband.  This will help the family social standing in America.  Alexandra is horrified when the suiter her mother has chosen tries to have his way with her in the garden.  She runs off to try to return to America to live her own independent life.  During her escape, her money is stolen, and she is left alone and penniless.  Help from some kind strangers allows her to grasp a new opportunity and become the governess to Thomas Carlyle, a handsome artist with two younger sisters.  Their governess has just left Mr. Carlyle in a bind and he quickly hires Alexandra.

Alexandra may be posing as a governess, but Mr. Carlyle is really, Thomas Carlyle, Earl of Longford.  When Alexandra arrives at his estate, she is stunned.  Thomas is earning money as a portrait artist to try to support his family and crumbling estate after his late father and grandfather squandered away the family inheritance.  Working for money is not done by an aristocrat so Thomas must hide his work and identity.

Alexandra learns to loves Thomas’s sisters, Julia and Lillie and becomes quite a good governess.  She also falls in love with Thomas and they have a charged atmosphere between them.  But when the truth comes out about Alexandra’s identity, will Thomas be able to put aside his prejudices against wealthy American heiresses to find true love?

I loved this novel.  I loved the gentle nods to one of my favorite all time Victorian novels, Jane Eyre with Alexandra’s work as a governess and love of the novel.  The chemistry between Alexandra and Thomas fairly leapt off the page – I loved their romance.  I especially loved that Alexandra was an independent woman who was not going to settle as her mother wanted her too but was working towards finding her own path in life.   I loved her relationship with Julia and Lillie.  The next two books in this series follow Alexandra’s sisters, but I hope that Julia and Lillie eventually get their own story as well.

Favorite Quote:
“’Resentment and hatred are wounds that only fester as time goes by’ she pointed out gently, ‘but they can be healed by forgiveness.’

Overall, Runaway Heiress is a well written Victorian romance with a strong independent heroine and great chemistry between the leads.  Jane Eyre and romance fans should take note. 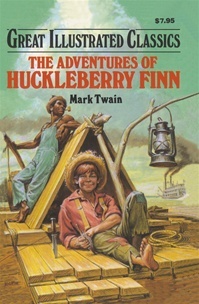 After we moved this summer, all our books were in boxes.  My ten-year-old son Daniel was in despair, but then discovered a set of Illustrated Classics that I bought a few years ago at an antique store and proceeded to read through them all at a fast pace.  I had also bought a few books online a few years ago to augment the set with books I thought the boys would like. His favorite authors were Charles Dickens and Mark Twain.  He really liked The Prince and the Pauper and Tom Sawyer by Mark Twain.  He thought Tom Sawyer’s escapades were hilarious.  He saved Huckleberry Finn to read with me and we just finished it last week.

Daniel also liked the humor and adventure in Huckleberry Finn, but he really liked his friendship with Jim.  He was very concerned about Jim and was glad that Jim got a happy ending.  I wish there was a follow up novel on Jim. Now that he is free – what happened to him?

I know that some people are dead set against the Illustrated Classics series as it takes classic stories, reduces them to a shortened kid version, and includes a picture on each paper.  I have always been in favor of them.  I read a few of them as a kid myself and it introduced me to authors that I then looked for as my reading level increased.  I read the full Tom Sawyer and Huckleberry Finn when I was not much older than Daniel.  I have them sitting outside his room on a book shelf, and I wouldn’t be surprised if he doesn’t pick them up on his own and read them sometime soon.  He is a voracious reader.

Daniel said he was asked at school what the difference was, and he said there are more pictures and no swearing in the Great Illustrated Classics.  Overall, they are a nice way to start introducing your children to the classics.
Posted by Laura's Reviews at 12:20:00 PM 3 comments: