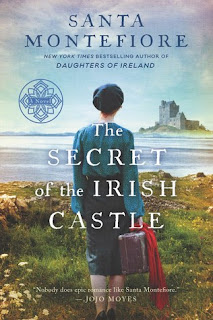 The Secret of the Irish Castle starts in 1939 Ireland.  The Deverills built their castle on O’Leary land three hundred years before and were cursed for it.  Now in 1939 they have lost the castle to a former maid, Bridie Doyle, who made her fortune in America, married a count, and returned to lay claim to the castle.  Bridie finds she is trapped between two worlds, not accepted by her old friends with her rise in station, and not accepted by the wealthy elite.  She loves her husband Cesare but doesn’t realize that he already has a bad reputation for chasing all the ladies in the village.  Will Bridie be able to find herself and happiness?

Martha Wallace is a young American who has traveled to Ireland with her old nanny to search for her birth mother.  She has found out through her sister that she is adopted and using her birth certificate, she tries to find the truth.  While in Ireland, she meets JP Deverill and instantly falls in love.  The two are perfect for each other, but will the secret of their parentage drive them apart?

With WWII looming and then starting, the Deverill family, friends, and enemies from Ballinakelly Ireland find themselves at the center of the home and war effort.

The Secret of the Irish Castle is at its heart a family drama involving several different families and a lot of characters.  Luckily there are family trees at the start of the novel, which I did use throughout my reading.  I was a bit flummoxed while reading the novel as they seemed to give short back stories on some characters which involved major events.  I kept thinking, I wish there was a novel about those events . . . then I was walking through Costco and saw Daughters of Ireland, which appears to be the book before the Secret of the Irish Castle.  I looked up the author and The Secret of the Irish Castle appears to be the third book in the series.  It is slightly confusing as the book titles are different in the United States.  I read through it fine as a stand-alone book, but I think I would like to go back and read the books before it in the series.

I enjoyed the different characters and the drama that happened in their lives. The drama involves a lot of love and a lot of extra marital affairs. I also loved that the story started with the original curse on the castle by Maggie O’Leary.  I want more on Maggie – she is a very interesting character.  Her curse is that the Deverills are cursed to remain behind at the castle in spirit and never pass on to the other side until an O’Leary returns to the castle.

I also loved the setting in Ireland, with trips to England. It sounds beautiful.  I especially loved the details about the castle itself – how it was burned down and then restored.

I love WWII historical fiction.  In this novel, I love that JP Deverill becomes a WWII fighter pilot and that others in the book also play parts in WWII as well.  It’s interesting to see how the war changes their lives.

“’Human nature will never change,’ Adeline said wisely. ‘Modes come and go, but human nature remains the same.  Beneath the trappings of civilization, we are closer to the animal kingdom than we realize.’”

Overall, The Secret of the Irish Castle is a very interesting family drama and historical fiction novel set in Ireland and England in the WWII era.

Book Source:  Review Copy for being a part of the TLC Book Tour.  Thank-you!  For more stops on the tour, check out this link.