Emily Dickinson died more than 125 years ago, yet it is as if she’s usurped our landscape and our language – Emily is everywhere. 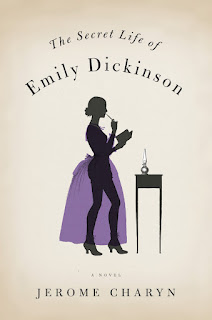 Last week an article about the virtues of walking one’s dog appeared in the New York Times, bearing the cryptic title: “Started Early, Took my Dog.” The author had burglarized one of Emily’s poems, and never even mentioned her - or Carlo, the wondrous Newfoundland who accompanied Emily for sixteen years.

It was while mourning Carlo that she began to wear white. She was lost without her mute Confederate. But that’s another matter.

Started Early, Took my Dog. We don’t even have to attribute her lines anymore. She’s become one of the most poignant icons of our new century – a full-blooded renegade -rather than a reclusive spinster with red hair – or a helpless agoraphobic trapped in a room in her father’s house.

Last year Holland Cotter, an art critic for the New York Times, wrote about this metamorphosis in an article entitled, "My Hero, the Outlaw of Amherst.” Her upstairs bedroom was no secret sanctuary; it was “an empowerment zone.” [I felt that same power when I first visited her room in 2008, a kind of crazy thrill.]

Thirty-five years ago Emily was still the Belle of Amherst, as personified by Julie Harris, a harmless, asexual mouse. The play by William Luce was an enormous success, and it might have crippled Emily forever if Julie Harris hadn’t found other roles to play.

But around the same time that Belle romped around in her white dress, the late Adrienne Rich worked on one of the most perceptive essays ever written on Emily Dickinson – “Vesuvius at Home.” Rich dealt with Emily Dickinson as one poet contemplating another. She understood the depth of the problem. We’d turned Emily into some kind of “gnomic Garbo,” sentimentalized her in our own private menagerie of five or six poems. “I have come to imagine her as somehow too strong for her environment, a figure of powerful will, not at all frail or breathless.” Nineteenth-century women had no voice; intelligence was a curse for any female. 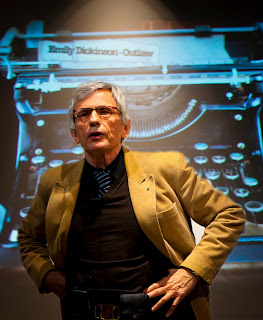 Dickinson invented “a language more varied, more compressed, more dense with implications, more complex of syntax, than any American poetic language to date.” I would ever go further than that. She has wormed her way into the psyche of the West.

Harold Bloom hated to teach her, because looking at her poems with his students always gave him a headache – it’s a headache I’d love to have. And Bloom admits in The Western Canon that “except for Shakespeare, Dickinson manifests more cognitive originality than any other Western poet since Dante.” I see her as a kind of female Hamlet with daggers in her mind. She’s murderous and playful, and ultimately unknowable. And her language shifts from second to second, so that we’re never standing on solid ground. Consider Hamlet driving Polonius a little crazy as he compares a cloud to a camel, then to a weasel and a whale. All we would have to is supply the dashes, and we’d be right inside one of Emily’s electric whirlwinds.

But finally, it’s a whirlwind all her own. That’s why we celebrate her again – and again.

Not all Pianos in the Woods

Had power to mangle me —

And visited the Sea –

The Mermaids in the Basement

I felt a Cleaving in my Mind—

As if my Brain had split—


I tried to match it—Seam by Seam—

But could not make it fit.

The thought behind, I strove to join

Unto the thought before—

But Sequence ravelled out of Sound

No one else on earth could have written those last two lines – these are her bolts of Melody, her invisible signature.

As Brenda Wineapple tells us in White Heat: “ . . . language like this had never been seen before; nothing like it, really, ever appeared again.” Emily was, according to Wineapple, a woman of secrets, who wanted her secrets kept but wanted you to know she had them: “. . . she seemed to exist outside of time, untouched by it. And that’s unnerving. No wonder we make up stories about her: about her lovers, if any, or how many, or why she turned her back on ordinarily life and when she knew the enormity of her own gift (of course she knew) and how she combined words in ways we never imagined and wished we could.”

Everyone seems to have his or her own version of Emily. In Aife Murray’s new book, Maid as Muse, we have a marvelous menagerie of ghosts – Emily’s servants, named and unnamed. Aife Murray relies on her own Irish roots to rescue these servants from oblivion, and she also rescues their habitat – that architecture of the unseen, where these servants labored and some of them lived – like Margaret Maher, who came to work for the Dickinson in 1869 and had a tiny room above the kitchen. Warm and wild and mighty, as Emily called her, she’s the real heroine of the text. It seems that Emily stored her “fascicles – her forty hand-sewn booklets of poems – in Margaret’s trunk. This explodes the whole notion of Dickinson’s “Immortality,” whether she ever wanted these booklets to be seen by another soul.

Why was Margaret the only one in Amherst who knew about the existence of these booklets and the rest of her mistress’ menagerie – that secret stash of poems. Emily wasn’t cavalier about other things. She left her own will and instructions about her burial – six Irish handymen from the Homestead were to carry her remains to the burial ground. But she left no instructions, to her own sister or her sister-in-law, Susan, about the most important matters of her life. Margaret didn’t burn this stash, as Emily had instructed her to do, and now, we have these poems, the wondrous shards of Emily’s existence, almost by accident.

Emily was an aberration, a female poet, who survived that terrible winter of nineteenth-century New England, where women weren’t allowed to think for themselves or reveal their own rage.

Jerome Charyn's most recent novel is The Secret Life of Emily Dickinson. He is currently working on a study of the reclusive poet for Harvard University Press.


If you would like to see more about this blog, it goes with this video: http://www.youtube.com/watch?v=hZpXxBJRbXM (blog was taken from his recent talk at The Emily Dickinson Museum in Amherst, MA.)

Thank-you Jerome Charyn for this great guest post!  I can't wait to read The Secret Life of Emily Dickinson!