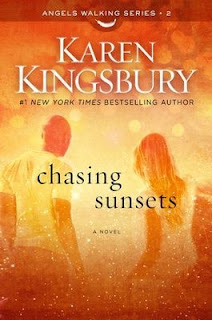 What if you were to become the mother of an important child for all of humanity and you didn’t know it? What if angels were sent from God to watch over you and to fight the forces of evil to ensure that you would become the mother of this child?  This is the basic premise of Chasing Sunsets.

Jag is an angel that had a mission ten years before that ended in tragedy. He is trying to make up for that on this current mission.  With gangs running around LA causing senseless violence, Jag has a hard time controlling his rage and keeping with the forces of good.  He has a partner, Aspyn, who helps to intervene and stop tragic events.

Mary Catherine is a wealthy young woman who is living life to the fullest.  She has a heart condition that leaves her not knowing if the next day will be her last.  She devotes her life to charity, but starts to have strong feelings for Marcus, a pitcher for the LA Dodgers.  Although Marcus appears to return these feelings, Mary Catherine doesn’t want to embark on a relationship with her health in peril.  Together Mary Catherine and Marcus help Lexie, a young teenage girl and girlfriend of Dwayne, a wannabe gang leader who attempted to murder Marcus.  Lexie feels like there is no future for her outside of the gang, but with the help of Mary Catherine, Marcus, and her incarcerated mother, Lexie starts to learn that there is more to life than being part of the gang and that she has the possibility of a different future.

I thought this audiobook had a riveting storyline.  I thought this was much stronger than book one.  The Angels had more of a personality and were better-rounded.  They played a more integral role in the storyline.  I particularly loved Jag and his struggle with remaining good and not seeking vengeance.  I also really enjoyed Lexie’s storyline as well.  It was a painful story, but also one of hope.  I sadly missed the very end of this book as my audio file must have been corrupted.  I need to find a hard copy to find out what happened on the last few pages!  I also enjoyed that Tyler and Sami were back from Book #1.  I think this book stands on its own, but there is enjoyment from knowing more of the background of the characters if you’ve read book one.

I enjoyed the start of the audiobook, I enjoyed the thanks at first and they even brought a tear to my eye . . . until they seemed to go on forever.  They went on for ten minutes and I’ll admit I skipped forward.  I think this would be more appropriate for the end of an audiobook than the start of one.  Otherwise, January LaVoy and Kirby Heyborne were great narrators and it was a perfect story to keep me entertained and awake on my hour long commute to work.

Overall, Chasing Sunsets was a powerful book with an intriguing storyline.  I really need to read book three!
Posted by Laura's Reviews at 1:59:00 PM 1 comment: 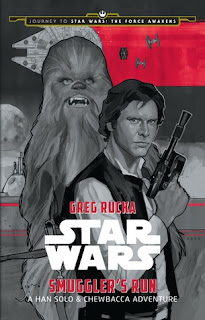 My son Kile loves everything Star Wars.  His review of this book is that it was “good.”  I sadly couldn’t get him to elaborate.  He is a boy of few words, although he let me know that the book we started last night was not enthusing him by staring at his stop watch the entire time (he has to read for at least twenty minutes each night for school.  When it’s a Star Wars book he keeps reading until he’s too tired, which is usually well over that time limit) and then asking as we finished, “can we read my Star Wars book from the library?”

Smuggler’s Run is framed by an old Han Solo telling a story in a bar at the beginning and end of the book.  The story is of an adventure that Han Solo and Chewbacca had after A New Hope.  Princess Leia convinces Han and Chewbacca to rescue Major Ematt, an important rebel that is the only survivor of an elite recon crew that has all of the future rebel base locations.  Han and Chewbacca are off on their adventure with help from Delia Leighton, the captain of the Miss Fortune, a flying cantina.  They also have to fend off the empire and Commander Alecia Beck, who is determined to destroy anyone involved with the rebellion after the destruction of the death star.

Smuggler’s Run was a fun adventure.  Han and Chewbacca’s dialogue was perfect, witty and fun, just like in the movies.  Kile and I laughed often throughout the book.  We also both liked the illustrations.

Overall, Smuggler’s Run was a fun read for both my almost ten year old son and myself.  I highly recommend it to anyone who loves Star Wars.

Book Source:  Kile received this book for Christmas from Aunt Jenn and loved it!  Thank-you!
Posted by Laura's Reviews at 1:51:00 PM 1 comment: 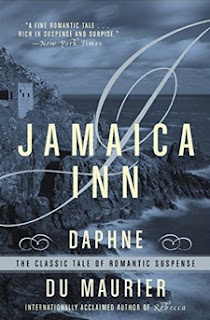 A young woman alone after the death of her mother, Mary Yellan, has traveled to the mysterious and lonely Jamaica Inn on the cost of Cornwall to stay with her Aunt and Uncle in 1820. As her mother said, “A girl can’t live alone, Mary, without she goes queer in the head, or comes to evil.”  Mary finds herself in a precarious situation.  Her Uncle Joss Merlyn is a hard brute of a man who mistreats her mother’s sister, Aunt Patience.  Although she is abused, Aunt Patience loves Uncle Joss and won’t leave him.  Mary has spunk, but she decides to stay at Jamaica Inn to determine the mystery of the place and to help her Aunt Patience.  Why don’t the carriages stop at the Inn anymore?  Why do strange men come every once in a while and move items into a locked storage room and then move them away?

As Mary works to solve the mystery, she also roams the surrounding moors and gets to know the area.  While wondering, she meets the younger brother of Uncle Joss, Jem, who also happens to be a horse thief.  “He lacked tenderness; he was rude; and he had more than a streak of cruelty in him; he was a thief and a liar.  He stood for everything she feared and hated and despised; but she knew she could love him.”  She also meets Frances Davey, the vicar of the nearby Alternun, a man she can turn to about her worries about her Uncle.

It has been a good twenty or more years since I read this novel.  I remembered the general premise, but a lot of it was like new to me.  I like how we are able to solve the mystery with Mary and learn what horrors are occurring at Jamaica Inn.  I really liked her courage and her nerve in trying to do what was right.  I also loved her romance with Jem.  He is no angel, but there is more depth to him than Mary originally assumes.  I also loved the setting – 19th century Cornwall.

I love Du Maurier’s writing style and many of her books are my favorite novels such as Rebecca, My Cousin Rachel, and Frenchman’s Creek.  Some of my favorite quotes from Jamaica Inn were as follows:

As Mary leaves her home:  “Already, though barely forty miles by road from what had been her home for three-and-twenty years, the hope within her heart had tired, and the rather gallant courage which was so large a part of her, and had stood her in such stead during the long agony of her mother’s illness and death, was no shaken by this first fall of rain and the nagging wind.”

Mary witnesses mass brutality and is in a state of shock.  “The wheels of the cart crunched the uneven lane, and, turning right, came out upon a smoother surface of gravel that was a road, running northwards between low hedges.  From far away, across many fields and scattered plough lands, came the merry peal of bells, odd and discordant, in the morning air.  She remembered suddenly that it was Christmas Day.”
I love Jem’s description of life in a village.  “I’ve never had neighbors, so I cannot contradict you, but I’ve had the feeling always it would be like living in a box, to live in a village.  You poke your nose over your gate into another man’s garden, and if his potatoes are larger than your own there’s a talking upon it, and argument; and you know if you cook a rabbit for your supper he’ll have the sniff of it in his kitchen  Damn it, Mary, that’s no life for anyone.”

Jamaica Inn was Daphne Du Maurier’s second novel.  She was inspired to write it after visiting the real Jamaica Inn that still is a pub in the middle of the Bodmin Moor in Cornwall.  Jamaica Inn was also made into a 1939 movie by Alfred Hitchcock starring Maureen O’Hara and Charles Laughton.  I just watched this movie again when I reread the book.  I was surprised on how the movie is basically nothing like the book.  Even more surprising, the movie shows you in the first scene what Mary spends the entire novel trying to discover.  It was entertaining, but far, far from being a faithful adaptation.  I also discovered that there is a much clearer and better copy that I have watched in the past.  I will need to find this when I watch it again in the future.

Overall, Jamaica Inn is a riveting suspenseful historical fiction novel with great characters, plot, and setting.  I highly recommend it!  I read this as part of The Classics Club and The Historical Fiction Reading Challenge.