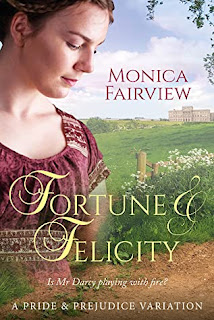 After proposing to Elizabeth Bennet despite his reservations, Fitzwilliam Darcy is shocked that she has refused him.  He thinks about writing her a letter to explain his position, but instead decides to propose to his cousin Anne de Bourgh instead.  A few years have passed, now Anne is dead, and their daughter Kathy, is a lonely child with a temper and tendencies like her grandmother Catherine de Bourgh.  Mr. Darcy needs a governess to help him out with Kathy, but he needs just the right kind of governess.  He advertises and when he goes to interview the candidates, he discovers one candidate, Mrs. Heriot, is the Elizabeth that he proposed to years ago.  He also realizes she is the best candidate for the job.  Can he keep his old feelings under control while she is his employee?  Will Kathy be able to handle having a governess?  How does Elizabeth feel with her change in status?

I loved this novel and read it quickly.  Author Monica Fairview has a vivid understanding of Austen’s characters and is able to write them so believably it is like having another Jane Austen novel.  I really like the look into the “what if” scenarios and how one small change can ripple through a family and make a difference.  Lydia still ran off with Wickham, but he abandoned her.  Jane was the saddest to me.  She married a respectable tradesman and has a passel of kids. The sense is that she married him to help her family out rather than for love.  Elizabeth married a navy captain for love, but after his death left her without the means to live on her own, she has moved in with her sister Jane.  After overhearing that Jane’s husband is in tough financial straits, she decides to strike out on her own as a governess and ends up getting a job at Pemberley.

I really loved a tough conversation that Jane has with Elizabeth.  “Think, Lizzy, for once in your life, instead of being guided by emotions.” Jane gives her some hard truths about how her emotions have put the family in their current predicament.  I loved it!  It was a new way to think about Elizabeth.

I loved Elizabeth’s time at Pemberley and the predicament of being a governess which is a difficult situation.  She is above the servants, but below the family.  It makes for a lonely life.  I love how Mr. Darcy thinks of this and helps her to find a new friend in the village.

Mr. Darcy has had a lonely life without love and I enjoyed how he learns to open up to the possibility of love.  It was a romantic story.

Overall, Fortune and Felicity is a not to be missed Pride and Prejudice variation which perfectly captures Austen’s beloved characters while telling a compelling new story.