The Pull of the Stars by Emma Donoghue 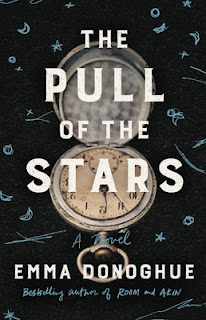 The Pull of the Stars is a beautifully written novel that tells the story of just three days in a maternity ward in Dublin during the 1918 flu pandemic.  These three days have enough in them to fill a lifetime.

Julia Powell is a nurse in an understaffed hospital in Dublin in 1918.  She is proud to be in charge of her own ward, but troubled that she is by herself with pregnant mothers that are sick with the “grippe.”  During this time, she meets Dr. Kathleen Lynn, a volunteer doctor who is also rumored to be a rebel on the run from the police, and Bridie Sweeney, a young orphan girl who comes to help out during the pinch.  Julia is also troubled with thoughts about her beloved brother Tim.  He is a veteran of the great war, but he has come back not the same.  He no longer talks and Julia wonders how to help him.

The story is told in the first-person stream of consciousness from Julia’s point of view.  I liked this.  I felt like I was immersed in the story and seeing everything from Julia’s angle.  The book was action packed and covered a lot of topics including post traumatic stress in veterans, Catholic treatment of orphans and unwed mothers, the uprising in Ireland, female doctors, birth defects, high loss of mothers due to poverty and medicine of the time, and the meaning of love.  It was a lot for a relatively small book.  I set this book down and my mind was racing.  It covered a lot, but it covered it well.  I was crying by the end and it has given me a lot to think about.  It was a heavy read so I had to follow it up with a lighthearted book, but it was great historical fiction.  It’s amazing that this was written before our current pandemic.  It was interesting to think about what is similar and what is different from now to 1918.

I enjoyed finding out at the end that Dr. Kathleen Lynn was a real historical figure.  She was a fascinating person in history and I want to learn more about her.

Favorite Quotes:
“That’s what influenza means, she said.  Influenza delle stelle – the influence of the stars.  Medieval Italians thought the illness proved that the heavens were governing their fates, that people were quite literary star-crossed.”

“So, I carried him along through streets that looked like the end of the world.”

Overall, The Pull of the Stars is a powerful novel that tells the story of love and loss during the 1918 pandemic.

Book Source:  Checked out from the Kewaunee Public Library.  Thank-you!
Posted by Laura's Reviews at 7:04:00 PM