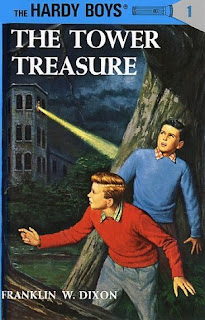 I was a Nancy Drew fan when I was a kid and somehow, I missed the Hardy Boys.  I believe it is because my local library had the entire Nancy Drew series, but I don’t remember them having the Hardy Boys series.  I loved to check the books out and read them.  As an adult, we read the first Hardy Boy novel for a book club I used to be in over ten years ago.  I purchased a set of the first ten Hardy Boys from Costco last year for my then 11-year old son Daniel for Christmas.  He sadly was not enthused about them, but we picked up the first book a month ago to try it out and he was quickly hooked.

Joe and Frank Hardy stumble onto a mystery when their friend Chet’s beloved “jalopy” is stolen by a mysterious man in a red wig.  The mystery in their town of Bayport deepens when their Detective father Fenton is hired to solve the mystery of stolen jewels and other articles from a local mansion that has two towers.  The boys are on the case and through many twists and turns they are able to solve it to help out their father and the wrongly accused father of one of their “chums.”

This is the first novel that started the Hardy Boys long running series that was written by ghost writers.  It was written in 1927 which you could tell by the use of certain phrases like “chums.”  Daniel and I both like old books so this was fun for us. Like Nancy Drew, the Hardy Boys also have a fat friend, Chet, whose weight and stoutness seem to be commented on throughout the book.  This was annoying to me, but Daniel and I just joked about it.  The now 12-year old Daniel does not like horror or scary books, therefore the low stakes mystery in this book was perfect for him.  He at first pointed out that it reminded him a lot of The Boxcar Children, which he liked in his younger years.  He wasn’t sure if this book was too young and formulaic for him.  I think Frank and Joe being older teen boys (17 and 18) helped him out on this and their constant adventures.  He was both annoyed and intrigued at the end when he kept thinking they found the treasure but did not.  A fun mystery with adventure, teens riding on motorcycles, and treasure were all a good COVID read for both Daniel and me.  We’ve already started on the second book in the series.

Overall, The Tower Treasure was a fun vintage mystery to read together with my son.