Crispin: The Cross of Lead by Avi 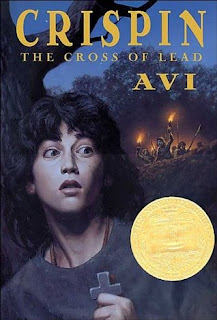 Crispin:  The Cross of Lead is an adventure story set during medieval times.  Known for his entire life only as Asta’s son, Crispin doesn’t learn his true name until his mother’s death.  Falsely accused of a theft, Crispin is declared a “Wolf’s Head” and has to run for his life to avoid immediate death.  Finding a friend, Bear, on the road the two wander on searching for the answers of who Crispin’s father is and why Crispin is being hunted.

Crispin: The Cross of Lead was the March pick for the Kewaunee Youth Book Club.  My 12-year old son Kile read this book on his own and loved it.  He really likes adventure stories and the medieval time setting.  He is a fan of The Hobbit, Lord of the Rings, and the Lion, Witch, and the Wardrobe series.  There is no magic or fantasy in Crispin:  The Cross of Lead, but it’s medieval time setting and adventure are intriguing to anyone who is a fan of those series.  I read the book with my 9 (almost 10) year old son Daniel using the flip flop method, I read two pages and then he read two pages.  Daniel did not love the story as much as Kile.  He got into more as it progressed, but I think it was a bit intense for him with a violent murder at the beginning and Crispin fleeing for his life.  Kile and I had long figured out who Crispin was and why they wanted him dead, but Daniel did not know.  That kept him intrigued until the end of the book.

I liked that a side story in the book has Bear working on gaining freedom for all as England’s King Edward neared death.  I love this time period of English history and also enjoy a good road trip book.  I enjoyed it more than Daniel overall, as much as Kile did.  I have heard of the author Avi but had never read any of his books before.  I found it to be a very interesting book.  It won the Newbury Medal in 2003.  I just looked up the book and discovered there are sequels!  I think I need to read on.  I want to know if Bear ever gets his revolution started.

“Bear used to catch the birds we ate:  an unseen loop, pulled tight, until the unsuspecting birds were caught.  Perhaps we now were those birds.”

Overall, Crispin:  The Cross of Lead is a thrilling historical fiction, adventure, coming of age story.  I and my 12-year old son enjoyed it.  My almost 10-year old son was on the fence.  It is a young adult novel so I think the intensity was a bit too much for my ten year old.  I recommend it for fans of The Hobbit or the Lion, the Witch, and the Wardrobe.