Anne of the Island by L.M. Montgomery 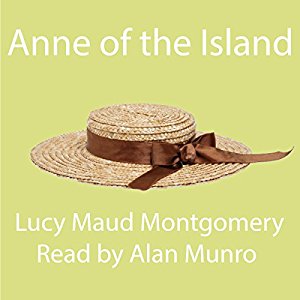 Anne is finally off to college at Redmond.  Together with Gilbert and Charlie Sloane, they represent Avonlea as they work towards their Bachelor of Arts degree.  This book covers the four years of college for Anne and her trials and triumphs.  She also visits home in Avonlea and we get to hear about our other favorite characters from past books.

I thought it interesting that at their second year in college, Anne and friends rent a very nice house together and one of the girl’s aunts comes to be a housekeeper for them.  I thought – wouldn’t it have been great to have a housekeeper while I was in college?  I guess back in those days before vacuum sweepers, washers, dryers, and other modern conveniences, one would need help to get the chores done.

It’s fun listening to this novel in a different time period.  I was horrified by the scene where Anne and friends try to euthanize a stray cat that befriends Anne as they don’t think it will get along with Aunt Jimsie when she comes with her cats to housekeep and be a chaperone.  I was so disturbed listening to this section, I could hardly take it.  But it was common practice at the time.  Let’s just say, it all turns out okay.

I liked that in this novel, Anne learns more about her parents and their story.  Getting to see their home and letters was poignant and bitter sweet.  I wish L.M. Montgomery had written their story as well.  It’s tragic how so many died young back in the old days.  Ruby Gillis has such a fate in this novel with tuberculous.

This novel was the turning point in the Anne and Gilbert Blythe romance.  I felt so sorry for Gilbert when he proposed and Anne turned him down saying she couldn’t think of him like that.  As her friend Phil said basically – Anne Shirley, you are making a big mistake.  What I love about Gilbert and the romance between him and Anne is that he truly respects her as an intellectual equal and they also share a sense of humor.  It’s a great romance for what you would really like to see in a marriage, and this book is a great look into what people think they want (dark, brooding, romantic heroes) and who the true heroes are.  I loved it.  In this book, it’s Anne’s journey from thinking she wants the storybook hero to recognizing the true hero and what is important in a life partner.

What I love the most about L.M. Montgomery’s books are her great characters.  They are charming and cantankerous, loveable or despicable, they are all unique and often fit the mold of someone that you know.  I love as Anne meets new people and we get to learn their unique stories – tragic or humorous.

I listened to Anne of the Island on audiobook. I was not a fan of Alan Munro’s narration.  It was very dry.  I usually listen to audiobooks while I am driving and I had to turn this one off and listen to it instead while doing chores around the house as I was afraid I’d fall asleep while driving.  He was very monotone. I thought he was a strange pick for a narrator about a lively young woman.  Anne has such a sparkling personality.  It would have been a better pick to have a female narrator that was a voice actor that could put feeling behind the narration.  I was especially annoyed that Munro did not pronounce Avonlea correctly, and at one point gave Gilbert a western accent. It made me throw my headphones off in anger more than once!

"I don't want sunbursts or marble halls, I just want you.”

“I've loved you ever since that day you broke your slate over my head in school.”

“I wouldn't want to marry anybody who was wicked, but I think I'd like it if he could be wicked and wouldn't.”

“I love them, they are so nice and selfish. Dogs are TOO good and unselfish. They make me feel uncomfortable. But cats are gloriously human.”


Overall, I wish I could split the stars up on this book. Five stars for the story, it was wonderful reading about Anne reaching adulthood and finding her true love for Gilbert. One star for the narration on the audiobook which was spiritless and dull.
Posted by Laura's Reviews at 1:24:00 PM