The Man He Never Was: A Modern Reimaging of Jekyll and Hyde by James L. Rubart Review and GIVEAWAY (TLC Book Tours) 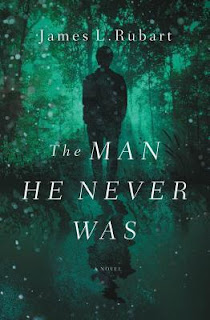 Toren Daniels awakens one morning in a strange hotel, even though he remembers falling asleep beside his wife at home the day before.  Getting up and venturing into life, he realizes he has been missing for eight months and was presumed dead.  Where has he been this entire time and what has happened to his fierce anger that was driving a wedge between him and his family?

Toren was a NFL player who had troubles managing his anger on the field.  So much so that he lost his spot on the team and in the NFL overall with no team wanting him.  Instead of having that outlet for his anger, he instead starts taking it out on his family until the day he disappears.

Toren spends this story trying to figure out what exactly happened to him during this time.  He feels like he can control his better anger now – where was he?  How can he use this control to get his family back?  As he explores he starts to realize it is related to the classic Robert Louis Stevenson novella of Jekyll and Hyde.  Every person has a dark version of themselves that sometimes during hardships is unleased.  Jekyll was trying to figure out how to control and destroy that version of himself, has someone managed to figure out how to do this in the modern age?

I was intrigued by the entire premise and I really enjoyed the bringing in of the Jekyll and Hyde story as well as discussion of how that was used in the modern age for Hulk.  I also wanted to know along with Toren -where was he and I enjoyed his journey.  His journey took a deep look into his past and abuse at the ends of his father and how that led to his present.  Toren wants to be a good person for his family and to be able to regain his spot in the NFL, how can he get there?

“Because in Jekyll and Hyde, Robert Louis Stevenson portrays one distinctly good personality and one distinctly evil personality.  Henry Jekyll ends up in an all-out war with his dark half, Edward Hyde.  Jekyll says that he and every other man and woman is ‘not truly one, but truly two,’ and he sees the human soul as the ultimate battleground of our lives – one part of us an angel, the other a demon, both struggling for mastery and destruction of the other.”

Overall, The Man He Never Was is a very interesting and original story of a man’s self-discovery.  It’s a mystery/thriller as he tries to figure out what mysterious forces have been at work in his life.

Book Source:  E-book Review Copy for being a part of TLC Book Tours.  For more stop on the tour check out this link.

One lucky winner will receive a copy of The Man He Never Was by James L. Rubart. If you would like to win this book, please leave a comment on what interests you about this book. Have you ever read The Strange Case of Dr. Jekyll and Mr Hyde or watched a film/play version?  If so, what are your thoughts on the story?

This contest is only open to addresses in the United States and Canada.

The deadline for entry is midnight on Friday April 6th!

Please make sure to check the week of April 9th to see if you are a winner. I send emails to the winner, but lately I've been put in their "junk mail" folder instead of their inbox.