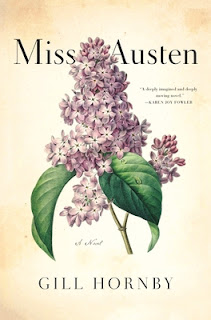 Cassandra Austen has outlived her famous sister by many years and has become the curator of her legacy.  Now at the end of her life, she knows there are incrementing letters left that she must destroy.  She visits the home of her late fiancé Tom Fowles family, to search for the letters.  Will she find the letters and what secrets is she trying to keep?

Miss Austen had an interesting make-up.  It was set in Cassandra’s older years and we get to know several of the next generation of the Fowles and Austen family.  Cassandra would read Jane’s letters or her own and then there would be a flash back to that moment in time.  It was an interesting way to get to know everyone and I felt like this novel fleshed out Cassandra’s psyche.  It is very much Cassandra’s novel with Jane as an elusive character.  It did give a great explanation for the years that Jane was not writing.

It took until the end of the novel to learn why the letters had to be destroyed as there were no major revelations.  It was letters that told of “Jane’s distress and Cassy’s dismay.” Cassandra seemed overly protective of Jane and wanted to ensure the future did not see that she like to pick on the characteristics of people just as she does in her novels.  I don’t think I realized before this novel that there was a third Lloyd sister.  Mary was married to the oldest Austen son, James, and Martha was their loyal friend and future wife of Frank.  I didn’t realize there was a third sister, Elizabeth, that was married to Tom Fowles’s older brother.  This older brother, Fulwar Craven, was the Vicar of Kintbury.  At his death, Cassandra has arrived at his home to look through letters that were sent to his wife Elizabeth.  The connections were very interesting to me and I was glad there was a description of them at the start of the novel.

“For whoever looked at an elderly lady and saw the young heroine she once was?”

“Cassandra was the executor of her sister’s estate:  the keeper of her flame; the protector of her legacy.  In the time that was left to her, she was determined to find and destroy any evidence that might compromise Jane’s reputation.  It was simply imperative that those letters did not fall into the wrong hands.”

Overall, this is a slow gentle tale that finally gives us Cassandra’s story and interesting thoughts to ponder on Jane herself.