Hugh Pembroke’s good friend Lord Carstairs has died suddenly.  He has entrusted his friend Mr. Pembroke with the guardianship of his daughter, Lettie.  Lettie was born to Lord Carstairs while he was in Antigua and secretly married to her mother, who was an enslaved woman.  Lord Carstairs father, the Viscount, is enraged to discover this secret marriage, and wants to ensure that Lettie is not acknowledged and is not allowed to inherit. As Mr. Pembroke and Lettie settle into their new life, they befriend their neighbors, the Nibleys, and their governess Aoife Donnelly.  What is Miss Donnelly’s secret?  Will Lettie be safe from her Grandfather?  Will she ever see her mother again?  What secret is Mr. Pembroke keeping?

I liked that the story in Mr. Pembroke’s Ward included the story of slavery in the Regency world.  Lord Carstairs married an enslaved woman and freed her, but their biracial daughter is not wanted by her paternal grandfather.  I thought this was very sad and even more sad 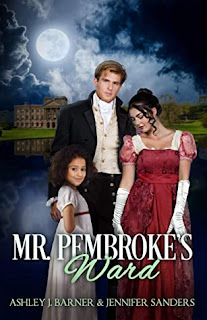 was the fact that Mrs. Carstairs is a freed woman left on the estate working essentially as an enslaved woman.  I wanted to know even more about this storyline.  There is a bit a white savor moment with Mr. Pembroke helping Mrs. Carstairs and the slaves left on the estate, but I thought she seemed like a strong woman herself.  I really want a novel with her and Lord Carstairs’s romance.

I’ll admit, I thought this was going to be a typical Regency romance between Mr. Pembroke and Miss Donnelly, but I was thrown for a loop when Mr. Pembroke is revealed to be a Werewolf.  I missed the part where there was paranormal in this novel.  I was not sure about this at first, but then I enjoyed the slight bit of paranormal in the novel.  I thought the strongest part of the story was the relationship between Mr. Pembroke and his ward Lettie.  I really liked how he was able to build a family throughout the novel.

Overall, Mr. Pembroke’s Ward is an interesting supernatural Regency romance with a look into slavery in the West Indies at the time, and a biracial romance.  I liked this unique story.