The Flight of Gemma Hardy by Margot Livesey 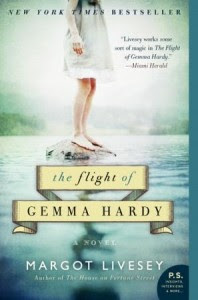 The Flight of Gemma Hardy is a riveting book that I had a hard time putting down. Reimagining one of my favorite Victorian novels of all time, Jane Eyre, The Flight of Gemma Hardy is the story of an orphan girl that is determined to make her own way in the world in the 1950’s. After her father’s death in Iceland, Gemma is taken by her Uncle to be raised in Scotland with his family. Unfortunately after her Uncle’s death, Gemma is mistreated by her uncaring Aunt and cousins. Gifted at school, Gemma tries to make her escape by winning a scholarship to Claypoole School. Unfortunately the school does not live up to Gemma’s expectations and she discovers that she is a “working girl” forced to clean and endure harsh conditions with a limited chance at success in her studies.


Befriending another girl, Marian, Gemma works to survive. She grows up at Claypoole and after school she finds work as an au pair to a spirited girl, Nell, on the Orkney Islands in order to save money for college. Nell is the niece of the mysterious Mr. Sinclair that lives in London and does not spend much time on the Islands. Will Gemma pursue her dream of going on to the University? Will she find out about her mysterious past in Iceland? Will she find love?

I loved Gemma’s journey of self-discovery. Poor Gemma didn’t have anyone in the world that cared for her and life was pretty dispiriting at times. But she had “gumption” and the will to work toward her goals to get a great education and to find out more about her parents. Jane Eyre is one of my favorite books of all time and I admit, I looked forward to this book, but also was leery that it would not live up to its predecessor. I think Margot Livesey did an outstanding job of staying true to the story and heart of Jane Eyre, while also making it very much her own story. I loved the setting and the characters. Many times in the novel Livesey was able to dig into deeper than Jane Eyre. I now feel like I really know why her aunt and cousins didn’t like her.

I loved Mr. Sinclair, but I must admit that the one let down for this novel for me was his big secret. SPOILER ALERT

For those that love Jane Eyre as I do, you know the big reveal is that Mr. Rochester had a mad wife in the attic which prevented his marriage to Jane. It was a tragic circumstance as he couldn’t divorce Bertha or live with her as a husband. In this book, there is not mad wife in the attic and the big reveal was not nearly as shocking as Bertha and didn’t really make sense to me why Gemma would begin her flight.


That was my only “beef” with this novel, but even that did not lesson my love for it. The prose was quite beautiful and I enjoyed it. Gemma Hardy is a wonderful character that is fully Jane Eyre’s successor.


I also enjoyed the bonuses at the end of the book and reading about Margot Livesey’s journey to writing this novel. I thought it was very interesting that she use her own memories of Jane Eyre (a beloved novel of her youth) that she hid during the writing of this book as well as her own childhood memories to create The Flight of Gemma Hardy. Part of what made Jane Eyre so powerful to me was Charlotte Bronte using her own life experiences. I think that also is what makes The Flight of Gemma Hardy so powerful, the use of Livesey’s life experiences.

I read this book as part of the TLC book tour. Unfortunately I was sick earlier this week and am posting this a day late.