The Convenient Marriage by Georgette Heyer 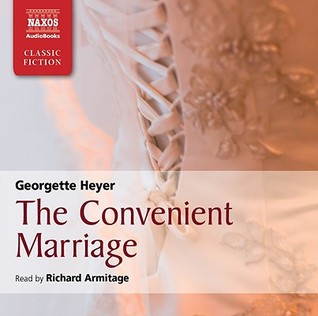 Marcus Drelincourt, the Earl of Rule, has agreed to marry the beautiful Elizabeth Winwood. The Winwood’s are an aristocratic family that has fallen on hard times. Much to the Earl of Rule’s surprise, Elizabeth’s younger sister Horatia “Horry” Winwood arrives on his doorstep and offers herself in place of Elizabeth in a marriage of convenience with the Earl of Rule. Elizabeth is in love with another and the Earl agrees to the sister swap although Horry does not share Elizabeth’s beauty and has a pronounced stutter.

The two are soon married and Horry makes a splash around town as a young new Countess with a love of gambling and a misunderstanding of the workings of finance. Things go too far when Robert, Baron of Lethbridge, an enemy of Rule starts to pay his attentions to Horry with the view of ruining her reputation. Horry just thinks Lethbridge is a nice friend and doesn’t understand the danger. She also wants to punish the Earl of Rule for continuing to visit his mistress, Caroline Massey. There are various scrapes and the Earl and Countess find that they care for much more than a marriage of convenience.

I LOVE Georgette Heyer and I had not previously read The Convenient Marriage. I will admit that I have had this audiobook on my “to-read” list ever since I discovered Richard Armitage narrated it. I LOVE Richard Armitage from the British North & South and Robin Hood series. He is the “hot” dwarf now in The Hobbit movies, although my husband is skeptical that there can be such a thing as a hot dwarf. Richard Armitage did the novel justice and was a wonderful narrator. I particularly loved his portrayal of the Earl of Rule and I found myself wishing this could be made into a movie with Armitage in the role. Seriously, why are Heyer’s novels not being made into movies? I can totally see this on Masterpiece Classic. I have another Heyer novel narrated by Armitage on reserve at the library.

I loved the shades of Pride and Prejudice in this novel. Lady Winwood is very concerned about marrying of her daughters and discusses the state of her nerves at times, which reminded me of Mrs. Bennet. Horry and Rule’s misunderstandings reminded me of how Elizabeth and Darcy misunderstood each other at the beginning of well. Other than that, it was a wonderful regency novel of its own and vintage Regency Heyer. My only complaint was that it was abridged. This novel was wonderful on Audio. I will be listening to more Heyer and hopefully more Armitage!
Posted by Laura's Reviews at 2:30:00 PM