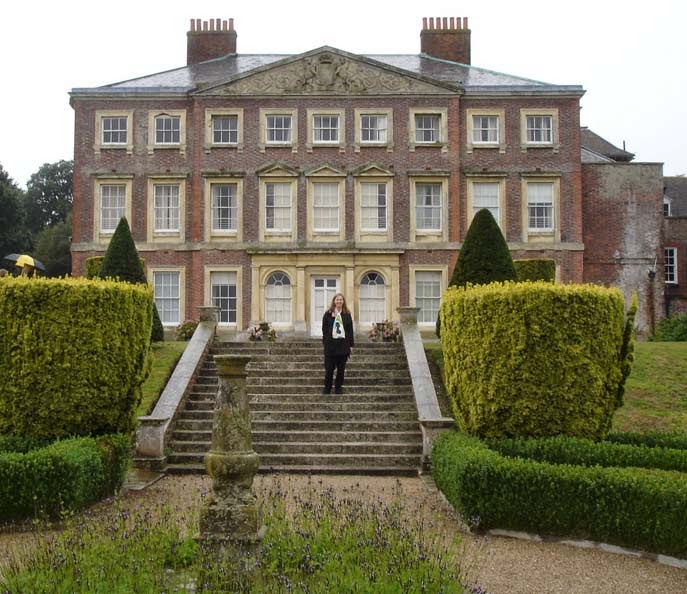 My novel Jane Austen’s First Love is set primarily at Goodnestone Park, an estate which still exists, and today belongs to the FitzWalter family, descendants of the Bridges family who Jane Austen knew over two hundred years ago. (Read on to the end for a relevant excerpt from the novel!) 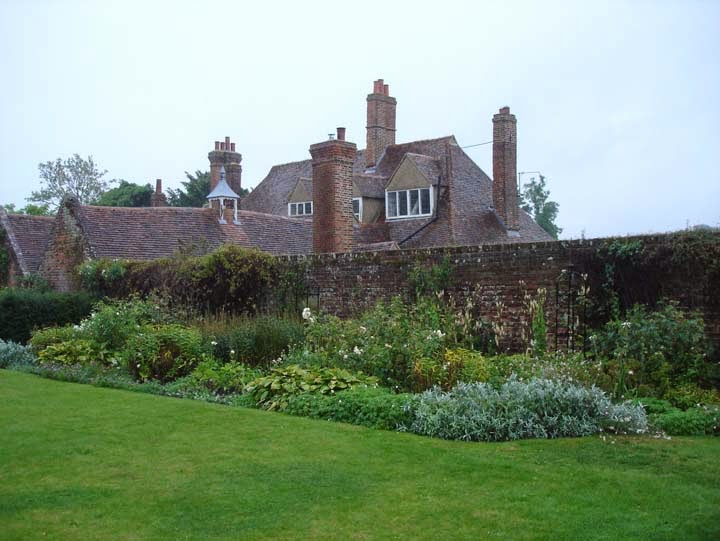 Situated in county Kent, England, Goodnestone Park is about nine miles from the cathedral city of Canterbury. The estate, which has been occupied since the Tudor era, was purchased by Brook Bridges, 1st Baronet, who in 1704 demolished the original manor and constructed a new, red and blue brick palladian house, which forms the basis of the house we see today. He also put in extensive, fifteen acre formal gardens, similar to those at Versailles. His grandson, Sir Brook Bridges, 3rd Baronet (who welcomed Jane Austen and her family into his home, after his daughter Elizabeth became engaged to Jane’s brother Edward Austen), made several alterations to the house in the 1770s, and replaced the manicured formal gardens with an open landscape park—a natural look which was more fashionable at the time. 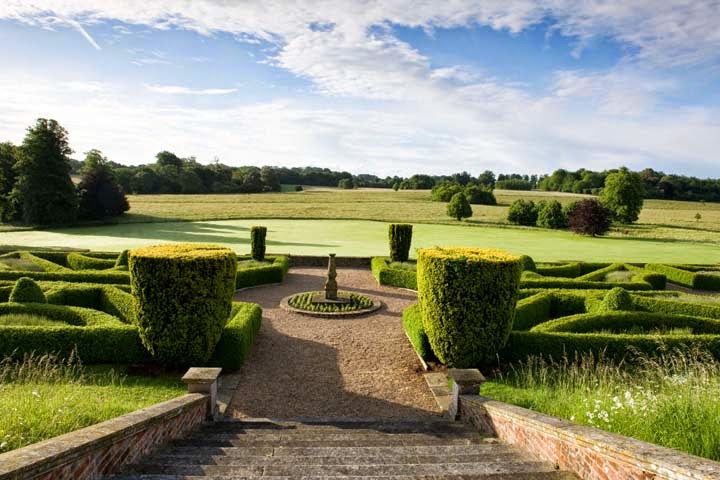 I was privileged to visit Goodnestone Park on a very special Austen tour last autumn. It rained the day we where there, but that couldn’t dampen my spirits. It was such a thrill to see the beautiful, ancient house and grounds where I had set my novel, and to know that Jane Austen had been there herself.

Although Goodnestone House is not open to the public, I applied to the present owners and asked to see the interior, explaining that I was writing a book which took place there and wanted to depict the house as accurately as possible. A very kind family member graciously complied, and gave me and my dear friend and traveling companion, Laurel Ann Nattress, a private tour. 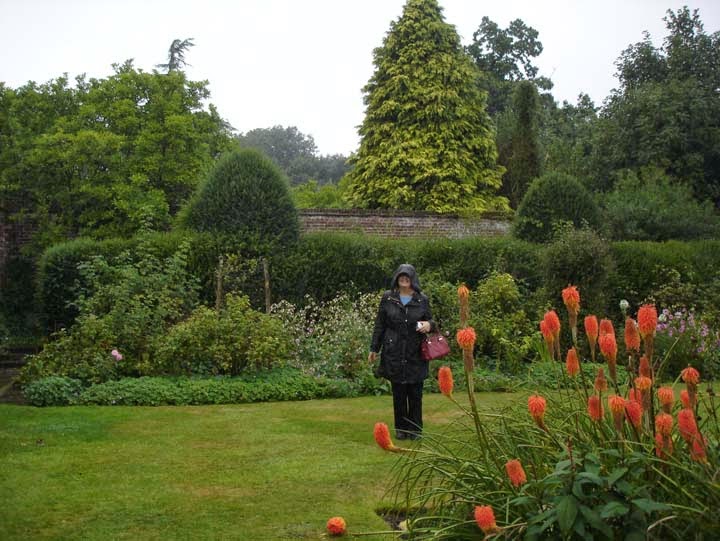 Inside Goodnestone House, I was immediately delighted by its unique, central oval entrance hall, which is embellished with detailed crown moulding and a series of large niches. The walls are adorned with delicate, Italianate paintings featuring floral patterns, cherubs, and scroll-work.  The ante-room and the adjacent drawing room and dining room were designed and furnished by the renowned Scottish architect Robert Mylne around 1770, and feature beautiful Wedgewood moulding around the doors. The ground floor also includes a library and a kitchen (in Austen’s day, the kitchen may have been a gun room or billiards room, since kitchens in her era were in a separate building.) A prominent main staircase in the large, central hallway features a swept and ramped handrail and dado paneling. The upper two floors feature a great many spacious bedrooms. 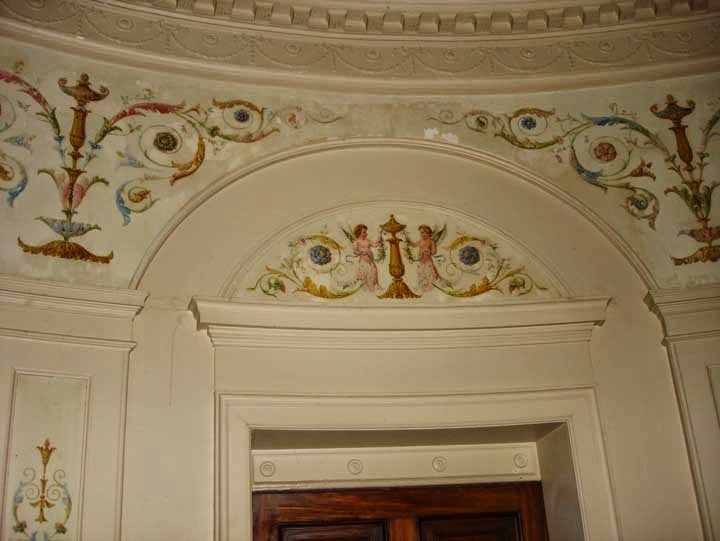 Walking through those rooms and halls was incredibly helpful to me. With every step I could see the action of my novel taking place in my mind. It was thrilling to know that Jane Austen, members of her family, the Bridges family, Edward Taylor, and all the other people in my novel had walked those very halls and climbed that very staircase! 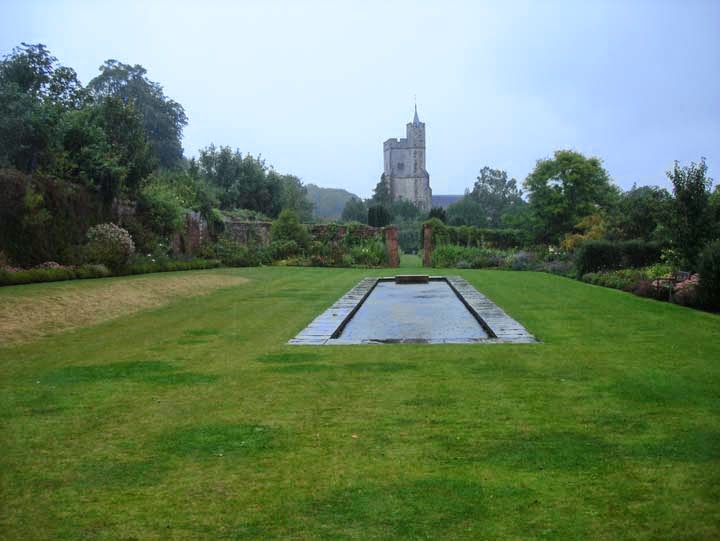 I enjoyed walking through the beautiful gardens at Goodnestone. There is an immense, natural landscape park at the front of the house, similar to what Jane Austen may have seen. A “holly walk” that leads to Goodnestone Church at the far end of the property, is the same path Jane would have taken when she walked to church with the Bridges family. There are also three large gardens which lead one into the other, each of which is enclosed by high, ivy-covered brick walls. The flora in these gardens may be different now than it was two hundred years ago, but the ancient brick walls are still the same. 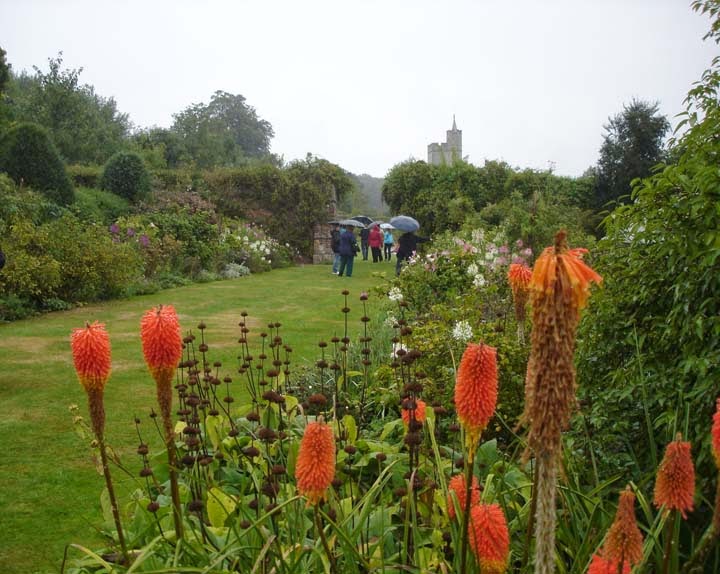 It was those high, brick walls which inspired a scene in my novel, Jane Austen’s First Love. Here’s a little excerpt from the relevant part... I hope you enjoy it!

At this point in the story, Jane is newly arrived at Goodnestone Park and has spent the better part of the evening conversing with the handsome and completely fascinating Edward Taylor. They are now exploring the gardens with Jane’s sister Cassandra and Edward’s cousin, Mr. Payler.

Studying the ancient, mossy, ivy- and vine-covered brick wall surrounding us, he added: “I particularly admire these walls.”

“The walls?” repeated I, amused.

“These walls, according to Lady Bridges, have stood here for more than a hundred years—and will no doubt still be standing two hundred years hence. Fascinating, is it not, to think of all the people who will see them and walk within their confines, long after we have all stopped breathing?”

Mr. Payler laughed and shook his head. “You have read too many history books, cousin.” 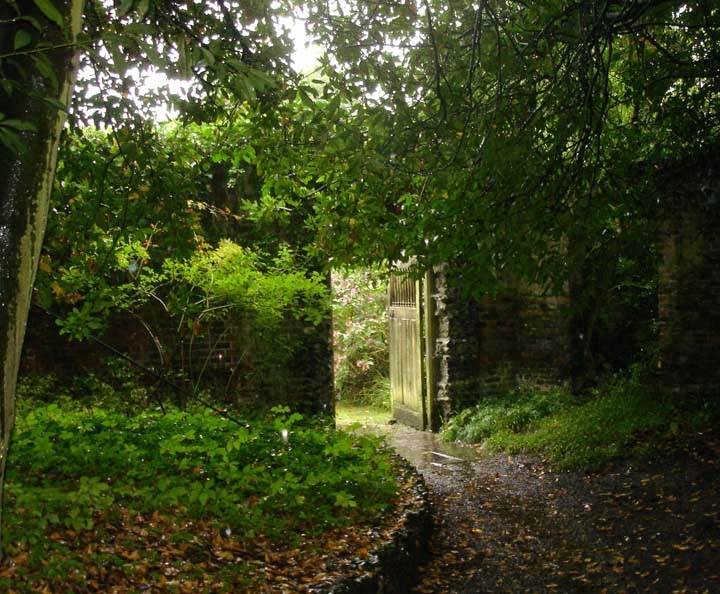 “We are a living part of history!” cried Edward Taylor. “We are making history this very moment.” Without further preamble, he leapt up onto a sturdy wooden bench which was situated along the partition, caught hold of the ancient bricks and vines, and began climbing up the wall itself.

My heart beat in my throat; the wall at that juncture was more than eight feet high! Further on, and for the greater part of the enclosure, the walls were even higher yet, towering an alarming eleven feet above the ground—and they did not appear to be very wide. “Come down, Mr. Taylor!” cried I.

He ignored me, and with some effort, managed to reach the top of the brick wall, where he cautiously rose to his feet, turning to look down at us.

“My brothers and I used to dare each other to walk the length of walls such as this, in every European village and town we visited or lived in. A sum of money was always involved. What do you say, cousin? Are you game?”

“Do not be a fool,” said Mr. Payler. “You could fall and kill yourself.”

“Therein lies the challenge. Where would be the interest, if the wall were but two feet high?”

Giveaway
Penguin Books has graciously offered a giveaway of one copy of Jane Austen's First Love by Syrie James.

If you would like to win this book please leave a comment about what most intrigues you about this book or this guestblog.

The deadline for entry is midnight on Monday August 18th, 2014.

The winner will be announced on this blog on Tuesday August 19th when I also post my review of Jane Austen's First Love by Syrie James.

Please make sure to check on August 19th to see if you are a winner. I send emails to the winner, but lately I've been put in their "junk mail" folder instead of their inbox.