Before the Battle of Waterloo, two lovers make a vow and start a secret that can unravel their two families.  Nearly thirty years later, both are dead, but their families and their deadly secret remains.  Belgravia is a novel told in serial form such as great Victorian novels were in the past by Charles Dickens and Elizabeth Gaskell.  Each piece of the story ends with a cliffhanger to be resolved by the next part of the story.

Episode 10 is a penultimate episode.  Many of the threads of the story have lead up to this episode and many secrets are revealed.  In the previous Episode 9, Jane Croft, Sophia Trenchard’s former maid, had paid a visit to Anne Trenchard on her way to America.  She brought along letters and papers from Sophia that she wanted to give her mother.    Among the papers was the marriage certificate between Sophia Trenchard and Edmund Bellasis as well as a paper from Sophia explaining the treachery involved and how she was tricked into marriage.  Two spies in the house, Anne’s lady maid Ellis, and the butler, Mr. Turton, secret copies of the papers to John Bellasis (heir apparent to the earldom after the death of Edmund).  Lady Maria Grey increasingly cannot deny her feelings for Charles Pope and feels forced into marriage with John Bellasis.  She contacts Charles Pope for help and together they approach Lady Brockenhurst.  Will Maria and Charles be able to follow the path of true love?  What will those mysterious papers provide?  Was the marriage between Sophia and Edmund legitimate?  For a review of Episode 9, see this post at Confessions of a Book Addict.

Episode 10 starts with a startling revelation, John Bellasis learns from a military friend and amateur historian that Richard Bouverie, the man who married Sophia and Edmund, was a Captain in the army who retired in 1802 and went on to take holy orders.  He later returned to his regiment when Napoleon escaped from Elba was killed together with Edmund Bellasis in the Battle of Waterloo.  Therefore, the marriage between Sophia and Edmund was indeed legitimate.    John is stunned by the news and tells his friend he was asking for a friend.  His companion laughs and replies: 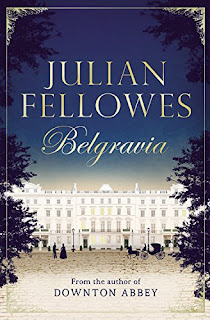 “Well, you can tell him he has nothing to worry about.  He’s as legal and legitimate as the little Princess.”

Susan Trenchard is pregnant.  She loves John Bellasis and has told him the news.  Once she finds out that Charles Pope is the true heir of the earldom and John will be disinherited and penniless, she offers to divorce Oliver Trenchard and marry John and bring her inheritance as the only child of a wealthy merchant with her.  John responds by laughing hysterically and says “Do you seriously imagine that I would ever marry the divorced daughter of a dirty tradesman?”  Susan leaves, but not before she makes sure she has the important papers with her.  She takes them home with her and gives them to her father-in-law after saying a boy has dropped them off.

James and Anne Trenchard are stunned by the papers.  Anne has the originals, but they now have the news that the marriage was legitimate.  James doesn’t want to spread the news without checking it first.  Anne recognizes the handwriting, which leads to the dismissal of Ellis and Mr. Turton.  They make one desperate attempt to take out Susan with them, but Susan’s lady maid, Speer, makes sure that doesn’t happen.

James also tells Anne that after eleven years of marriage, Susan and Oliver are finally having a baby.  Anne puts two and two together and confronts Susan.  They agree that Susan and Oliver will live at the country estate and Oliver will give up the business to be a country squire.  They will never mention that the baby is not Oliver’s.  Oliver is shocked by the news, but Susan spins a great story and says she did it for the two of them as what they were missing in life was a baby.  Oliver is touched and feels that Susan really loves him.  Susan realizes “She was in the clear.”

This was a powerful episode with many revelations and changes for major characters.  I love how Susan is a survivor and was able to take the devastation of not having John’s love, to finally get what she and Oliver wants - a child as well as an estate of her own and a better life for Oliver, who is not a man of business.  Susan is not a fan of living at the estate, but realizes that being the lord and lady in the country with visits back to London is a good life for them.

I also enjoy how all of John’s snooping has led to our heroes finding out the truth that Charles Pope is actually the legitimate child of Sophia and Edmund, and the heir to the earldom.  I can’t wait for the Trenchards to verify this and let Lady Brockenhurst know the news.  Both Lord and Lady Brockenhurst will be exalted by the news of a legitimate grandson and heir, but what will Stephen Bellasis do with his outstanding debt and no path to the inheritance?  And how will his son John react after the news gets out?

I adored the love story between Charles Pope and Lady Maria Grey.  Charles is held back by honor, Maria’s engagement, and his low birth compared to her.  I can’t wait until they learn the news, but one thing I wonder about is Pope’s clear head and interest in business.  How will that work as an earl?  Also I can’t wait for Lady Templemore’s reaction to the news.  I’m sure her treatment of Charles will promptly change, but he has already seen her true colors.

The story of the servants was also engaging.  I love how Speer sticks with Susan for now, but realizes she may be dismissed in the future, but will have a great reference.  I was glad that the two servants, Ellis and Mr. Turton, who turned against their employers of many years in order to make extra cash, were turned out.

I love that servants are included in the story in the style of Julian Fellowes Downton Abbey, although I would love more of their story.  I love the setting of the story, starting in the Regency period and then set firmly in the Victorian Age.  I find the story very engaging and hard to put down.  I t is very engaging being written in a serial form.  The storyline and characters are very interesting and I always want to know what will happen next.

What will happen next week in our final episode of Belgravia?  How will the secret be let out?  What will Charles think by the news as everyone seems to know now but him?  How will Stephen act to him and John no longer being the heirs?  I can’t wait to find out!  Gwyn Cready will be posting a review of this final episode next week at this link.

What did you think about this episode?  Were you surprised how Susan was able to spin events to a satisfying conclusion?  Did you have any thoughts that Edmund and Sophia’s marriage was legitimate before this episode?

In celebration of the release of Julian Fellowes’ Belgravia, Grand Central Publishing is offering a chance to win one of the three (3) hardcover copies of the book!

To enter the giveaway contest, simply leave a comment on any or all of the stops on the Julian Fellowes’ Belgravia Progressive Blog Tour starting April 14, 2016 through 11:59 pm PT, June 22, 2016. Winners will be drawn at random from all of the comments and announced on Austenprose.com June 23, 2016. Winners have until June 30, 2016 to claim their prize. The contest is open to International residents and the books will be shipped after July 5, 2016. Good luck to all!