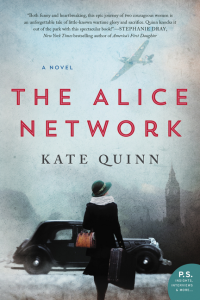 In the throes of World War I, a female spy ring, run by the daring multi-lingual Louise de Bettignies moves through German-occupied France, free France, Belgium, England, and the Netherlands passing reports and information all under the noses of the Germans.  Young and smart Eve Gardiner wishes for a life more than as a filing clerk.  She is excited to be recruited to work for the spy ring as she is half French and can speak both French and German.  Her looks make her appear younger and her stutter has many believing she is an idiot.  She is anything but an idiot.  She works in the restaurant of a collaborator gathering information from the German patrons and sending it along to England.  In order to stay safe and keep gathering information, Eve finds herself going further down the rabbit hole of deception.

In 1947, Charlotte, “Charlie”, St. Clair is an unmarried and pregnant college student.  Her mother takes her to Europe to get rid of the “little problem,” but as soon as their boat lands in England, Charlie escapes looking for the only lead she has in the disappearance of her beloved cousin Rose in France during WWII.   Her lead is a name, Evelyn Gardiner.  Evelyn is an old, drunken woman, who does not seem helpful at all.  Her driver and man of all works, Finn, is the only person who can settle her down.  Charlie eventually gets her to help and together, the three misfits set off for France to see if they can track down Rose.  Will they find Rose?  What is Finn’s back story?  What happened to Eve to turn her from a young daring spy to a bitter old woman?  How did Charlie get into her predicament?

I loved both the 1915 and the 1947 storylines.  The book alternated each chapter between the two timelines and did a marvelous job of navigating both worlds and tying the storylines together.  I loved learning the back stories of the three main characters and their growth throughout the novel.  I especially loved getting to the end of the novel and reading in the afterword how besides these three characters, many of the other characters and situations were all too true.  I also especially loved the story of Louise de Bettignies.  I’m not sure why I never learned about her before, but I’m glad to know of her now!    I’m intrigued by how much information the spies were able to send to the allies and all of the innovative ways they were able to do it.

Overall, The Alice Network was a wonderful historical fiction novel that seamlessly blended fact with fiction and tied together two equally intriguing narratives set during WWI and directly after WWII. The characters were riveting, especially the villain, Rene.  I would love to see this novel as a movie.

Book Source:  Review Copy from William Morrow as a part of the TLC Book Tour.  See the Schedule Here!

About The Alice Network

• Paperback: 528 pages • Publisher: William Morrow Paperbacks (June 6, 2017) In an enthralling new historical novel from national bestselling author Kate Quinn, two women—a female spy recruited to the real-life Alice Network in France during World War I and an unconventional American socialite searching for her cousin in 1947—are brought together in a mesmerizing story of courage and redemption. 1947. In the chaotic aftermath of World War II, American college girl Charlie St. Clair is pregnant, unmarried, and on the verge of being thrown out of her very proper family. She's also nursing a desperate hope that her beloved cousin Rose, who disappeared in Nazi-occupied France during the war, might still be alive. So when Charlie's parents banish her to Europe to have her "little problem" taken care of, Charlie breaks free and heads to London, determined to find out what happened to the cousin she loves like a sister. 1915. A year into the Great War, Eve Gardiner burns to join the fight against the Germans and unexpectedly gets her chance when she's recruited to work as a spy. Sent into enemy-occupied France, she's trained by the mesmerizing Lili, the "Queen of Spies", who manages a vast network of secret agents right under the enemy's nose. Thirty years later, haunted by the betrayal that ultimately tore apart the Alice Network, Eve spends her days drunk and secluded in her crumbling London house. Until a young American barges in uttering a name Eve hasn't heard in decades, and launches them both on a mission to find the truth...no matter where it leads. “Both funny and heartbreaking, this epic journey of two courageous women is an unforgettable tale of little-known wartime glory and sacrifice. Quinn knocks it out of the park with this spectacular book!”—Stephanie Dray, New York Times bestselling author of America's First Daughter 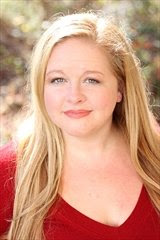 Kate Quinn is a native of Southern California. She attended Boston University, where she earned bachelor’s and master’s degrees in classical voice. A lifelong history buff, she has written four novels in the Empress of Rome Saga and two books set in the Italian Renaissance detailing the early years of the infamous Borgia clan. All have been translated into multiple languages. She and her husband now live in Maryland with two black dogs named Caesar and Calpurnia. Find out more about Kate at her website, and connect with her on Facebook and Twitter.
Posted by Laura's Reviews at 2:48:00 PM