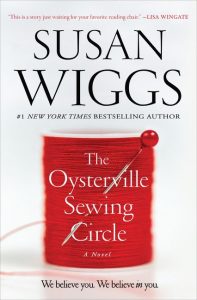 Caroline Shelby left her home of Oysterville Washington with big dreams of becoming a successful fashion designer in New York City.  Now ten years later, she has returned home with her designs stolen, her dreams crushed, and her best friend’s two kids, six-year-old Flick, and five-year-old Addie in tow.  What happened to their mother and why is Caroline now their guardian?

Will Jenson is a Navy Seal who has returned to Oysterville where he had spent so many happy summers as a youth with his Grandparents.  Honorably discharged because of a wound, he is now a high school teacher and married to Caroline’s former best friend, Sierra.  What is the history of Caroline, Sierra, and Will?  Why does Caroline have feelings every time she is around Will?

As Caroline attempts to rebuild her life, she realizes that domestic violence has touched many that she has known in her own home town.  She starts the Oysterville Sewing circle with her sisters for those women to find a place where they can build some solidarity.

I enjoyed this novel.  There were a lot of different story threads that were occurring at different points in time, and I liked how Wiggs expertly wove them together to get a full three-dimensional story.  I enjoyed how the novel explored domestic abuse, and loss. I loved how the women rallied together and were able to help and support each other.  I also liked how the book pointed out that domestic abuse can happen in all walks of life.  Caroline’s creativity and the look into the fashion industry were also fascinating to me.

Book Source:  Advance Reader’s Edition for Review from William Morrow as part of the TLC Book Tour.  Thank-you!!  For more stops on the tour, check out this link.

About The Oysterville Sewing Circle

“Stitched together with love, this is a story just waiting for your favorite reading chair. With her signature style and skill, Susan Wiggs delivers an intricate patchwork of old wounds and new beginnings, romance and the healing power of friendship, wrapped in a lovely little community that’s hiding a few secrets of its own.” — Lisa Wingate, New York Times Bestselling author of Before We Were Yours

The #1 New York Times bestselling author brings us her most ambitious and provocative work yet—a searing and timely novel that explores the most volatile issue of our time—domestic violence.

At the break of dawn, Caroline Shelby rolls into Oysterville, Washington, a tiny hamlet at the edge of the raging Pacific.

Home to a place she thought she’d left forever, home of her heart and memories, but not her future. Ten years ago, Caroline launched a career in the glamorous fashion world of Manhattan. But her success in New York imploded on a wave of scandal and tragedy, forcing her to flee to the only safe place she knows.

And in the backseat of Caroline’s car are two children who were orphaned in a single chilling moment—five-year-old Addie and six-year-old Flick. She’s now their legal guardian—a role she’s not sure she’s ready for.

But the Oysterville she left behind has changed. Her siblings have their own complicated lives and her aging parents are hoping to pass on their thriving seafood restaurant to the next generation. And there’s Will Jensen, a decorated Navy SEAL who’s also returned home after being wounded overseas. Will and Caroline were forever friends as children, with the promise of something more . . . until he fell in love with Sierra, Caroline’s best friend and the most beautiful girl in town. With her modeling jobs drying up, Sierra, too, is on the cusp of reinventing herself.

Caroline returns to her favorite place: the sewing shop owned by Mrs. Lindy Bloom, the woman who inspired her and taught her to sew. There she discovers that even in an idyllic beach town, there are women living with the deepest of secrets. Thus begins the Oysterville Sewing Circle—where women can join forces to support each other through the troubles they keep hidden.

Yet just as Caroline regains her creativity and fighting spirit, and the children begin to heal from their loss, an unexpected challenge tests her courage and her heart. This time, though, Caroline is not going to run away. She’s going to stand and fight for everything—and everyone—she loves. , and .

Susan Wiggs's life is all about family, friends…and fiction. She lives at the water's edge on an island in Puget Sound, and in good weather, she commutes to her writers' group in a 21-foot motorboat. She’s been featured in the national media, including NPR, PRI, and USA Today, has given programs for the US Embassies in Buenos Aires and Montevideo, and is a popular speaker locally, nationally, internationally, and on the high seas.

From the very start, her writings have illuminated the everyday dramas of ordinary people facing extraordinary circumstances. Her books celebrate the power of love, the timeless bonds of family and the fascinating nuances of human nature. Today, she is an international best-selling, award-winning author, with millions of copies of her books in print in numerous countries and languages. According to Publishers Weekly, Wiggs writes with "refreshingly honest emotion," and the Salem Statesman Journal adds that she is "one of our best observers of stories of the heart [who] knows how to capture emotion on virtually every page of every book." Booklist characterizes her books as "real and true and unforgettable."

Her novels have appeared in the #1 spot on the New York Times Bestseller List, and have captured readers’ hearts around the globe with translations into more than 20 languages and 30 countries. She is a three-time winner of the RITA Award,. Her recent novel, The Apple Orchard, is currently being made into a film, and The Lakeshore Chronicles has been optioned for adaptation into a series.

The author is a former teacher, a Harvard graduate, an avid hiker, an amateur photographer, a good skier and terrible golfer, yet her favorite form of exercise is curling up with a good book. She lives on an island in Puget Sound, where she divides her time between sleeping and waking. Visit her website at www.SusanWiggs.com, and connect with Susan on Facebook, Twitter, and Instagram.
Posted by Laura's Reviews at 1:58:00 PM