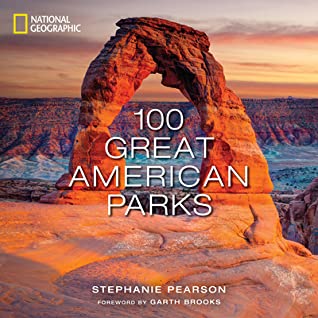 What is your favorite American Park?

I think my favorites so far have been the Grand Canyon National Park and Custer State Park.

The new National Geographic book, 100 Great American Parks by Stephanie Pearson, has everything you’ve come to expect in a National Geographic book.  It has awe inspiring beautiful pictures of the parks.  There are 100 parks in this book including all 63 national parks.  The foreword is by Garth Brooks discussing his travels as a touring musician and is very inspiring.  The introduction is full of interesting facts including that Boston Common was the first park in the United States in 1634 put in place as a space to graze cows.  Until 1817, a tree was used in the center for public hanging.  It has seen a lot of change over time.  Yellowstone National Park was the first national park in the world.  The U.S. Park Service was established in 1916 to manage 420 units across 85 million acres.

The book is split into five parts.  It starts with “The West and the Pacific” and has a wonderful section about the Grand Canyon National Park describing it with both words and fantastic pictures.  The White Sands National Park pictures brought back some happy memories of a trip there in college. Part two is “Off the Mainland.”  The stunning pictures really made me want to visit Alaska and Hawaii even more.  Part three is “the East and mid-Atlantic.”  It gave me a new idea to try to look for the “Harriet Tubman Underground Railroad National Historic Park” while we are in Maryland next month.  It made me excited about some places already on our list for our trip such as George Washington’s Mount Vernon. Part four is “the south.  I found out that Arkansas had the first National River, the Buffalo National River.  It looks beautiful. Part five is “the Midwest & Plains.”  My only complaint is this section is very scant.  As a lifetime Midwesterner, there are a lot more beautiful parks here than represented.  The only park from Michigan was Isle Royale National Park and the only park from Wisconsin was the Apostle Island National Lakeshore.  Meanwhile western states like California had ten parks included.

The last section of the book is a great list on how to protect our parks.

What new park would I like to visit are reading this book?  I would say the Katmai National Park and Reserve in Alaska.

“We all need a space to feel free.”

Overall, 100 Great American Parks is a beautiful coffee table book to remember great places you’ve explored, plan ahead for new places to visit, or to “travel” from your own home through the wonderful pictures.

Book Source:  A Review Copy from Hachette Book Group as part of the TLC Book Tour.  Thank-you! I received a complimentary copy of this book. Opinions expressed in this review are completely my own.