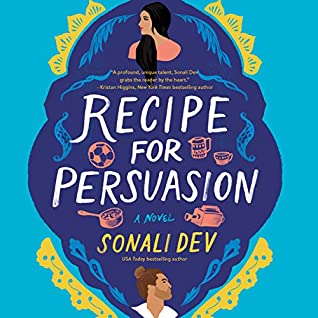 Source: Checked out from the Kewaunee Public Library through Overdrive.  Thank-you!

Would you participate in a reality cooking show?

Recipe for Persuasion is the second book in the Rajes Series.  There are shared characters in both books, but you can definitely read it as a stand alone novel.  I think of this series more as Austen inspired rather than a modern version of the Austen novel.  The overall theme of the Austen novel is here, but really nothing else.  The theme of Persuasion is second chance romance.

Chef Ashna Raje is trying to keep the restaurant she inherited from her father, Curried Dreams, going, while also trying to avoid her overbearing mother, Shoban.  Shoban wants Ashna to return to India.  Ashna decides the answer to her problems is to participate in the reality cooking series, Cooking with the Stars.  Once she starts the show, she discovers she is paired with good looking soccer star, Rico Silva.  Their first meeting goes viral.  Little does everyone know, but Ashna and Rico were high school sweethearts that had a messy break up.  How will the cooking show work with the two back together?

I love second chance romance and thought this was a great book.  I like how both Ashna and Rico have to deal with decisions they both made in the past and work through them.  I also really enjoyed that mother Shoban got a back story.  It told the tale of how she became the woman and mother that she was.  There was a lot of mult-layered family drama in this novel an I loved it!

Narrator Soneela Nankani was a good narrator and this was an enjoyable audiobook.  The audiobook switched between Shoban, Ashna, and Rico’s perspectives.