Helen Hollick Guest Blog, Author of Shadow of the King (and Giveaway) 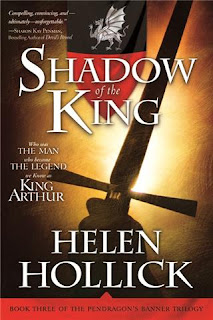 Today I am honored to have Helen Hollick, author of Shadow of the King as a guest blog. I love books dealing with Arthurian legend, and Hollick's books look fantastic.

Helen Hollick
One of my first memories is running from the library clutching a book I had not read (or at least, someone had read to me) I was four years old. I was writing stories when I was thirteen, in every spare moment scribbling something, and I confess even during lessons at school I was sometimes secretively writing!

I became a library assistant when I left school, and discovered the factual history behind the legends of King Arthur after reading Mary Stewart’s Crystal Cave and Hollow Hills novels – I was hooked on Arthur, but not the Medieval chivalric knight in shining armour, the Holy Grail or gallant quests, for some reason I disliked those made-up stories. My interest lay in the reality behind the legends. If Arthur had existed what would he have been like? Where would he have fought his battles? Against whom? And was his queen truly an adulteress?

My problem then, was that I soon became dissatisfied with novels about Arthur. They either had too much fantasy which made them feel unreal, or I just did not agree with the author’s viewpoint. So there was only one thing for it. Write my own.

I made several false starts, but eventually, after almost 10 years of writing and researching in my spare time I ended up with the manuscript of what was to eventually become The Kingmaking and half of Pendragon’s Banner.

My good friend, Sharon Kay Penman, encouraged me and I was delighted when William Heinemann of Random House UK signed me up for a trilogy. All I had to do was polish and edit the material I had, complete Pendragon’s Banner and write the third part of Trilogy – Shadow of the King. The research for Shadow was particularly enjoyable, as I used old Welsh Legends that possibly made Arthur Lord of Brittany, which meant I could I venture on a three week expedition to Brittany and France in search of locations. What a wonderful career writing can be!

I then went on to write two other historical novels, Harold the King, the story of the Battle of Hastings, 1066 (which is probably the most famous date in English history) writing it from the English point of view and stripping away all the incorrect Norman propaganda – for instance, Duke William of Normandy had no right to the English throne, whatsoever, he was a usurping tyrant.

While writing Harold, I became fascinated by Queen Emma, Edward the Confessor’s mother, and wife to two different Kings of England. I decided she deserved her own novel, so wrote A Hollow Crown (UK title)/ The Forever Queen (US title).

Both Harold the King and A Hallow Crown are available now in the UK (or via Amazon) and they will be published un the US by Sourcebooks Landmark: The Forever Queen in November 2010 and Harold the King in March 2011!

I have also written the first three adventures in my pirate-based historical-fantasy Sea Witch series: Sea Witch, Pirate Code and Bring It Close, featuring my charismatic rogue of a hero, Captain Jesamiah Acorne and his girlfriend, the white witch, Tiola. Full to the scuppers fun and action – a sort of blend of Indiana Jones, Cpt Hornblower and Richard Sharpe – with a little magic added in for good measure! I wrote Sea Witch out of pure love for my character after watching the first of Johnny Depp’s Pirate movies (who can resist Jack Sparrow?) I wanted to read more pirate adventures, but there seemed to be only teenage and children’s books available. Beyond the wonderful Frenchman’s Creek by Daphne du Maurier, I could find nothing for adult taste that included a touch of “adult” content. So, as with my Arthur stories, I researched the history of the Golden Age of Piracy, thought out my plot, invited my characters into my life – and wrote Sea Witch in about 3 months. Which included working on Christmas Eve and Boxing Day because I could not stop writing!

I am thrilled to discover that many readers are falling for my Jesamiah as much I did!

Thank you for inviting me onto your Blog, I’ve enjoyed myself! Tell me, what are your favourite books that have shaped you as a reader?

SHADOW OF THE KING BY HELEN HOLLICK—IN STORES MARCH 2010
They knew what was coming.
Man and beast knew what lay ahead.
After the war cry.
Bitter the grave.

At long last, the peace King Arthur was born to usher in has settled over the realm. But Arthur was also born to be a warrior… and all true warriors are restless without a fight. Yearning for battle and ever-loyal, Arthur is easily deceived into setting sail for Gaul to defend its territories—leaving his country vulnerable and leaderless.

A beacon of hope in a land of desolation, he was to be the Lord of the Summer Land for now and forever. But first, the Pendragon must face the ultimate test, one that will take all his courage, strength of will, and honor to survive.

Because once destiny is fulfilled, can you ever truly win again?

About the Author
Helen Hollick lives in northeast London with her husband, daughter and a variety of pets, which include several horses, cats and two dogs. She has two major interests: Roman / Saxon Britain and the Golden Age of Piracy--the early eighteenth century. You can Find Helen at the following places:

Main Website: http://www.helenhollick.net/
Blog profiles: http://www.acorne.blogspot.com/
Muse and Views Blog: http://www.helenhollick.blogspot.com/
My Picture Diary Blog: http://helenhollicksdiarydates.blogspot.com/
Facebook: www.facebook.com/helen.hollick
Monthly Journal: http://www.helenhollick.net/journal.html
Twitter: http://twitter.com/HelenHollick
Giveaway Details
Danielle of Sourcebooks has been kind enough to offer 1 set of Helen’s trilogy, The Kingmaking, Pendragon’s Banner and Shadow of the King for this giveaway.
If you would like to enter this contest do any of the following:
1. Leave a comment on this post. You must include an email address. If I can't find a way to contact you I will draw another winner. (1 entry)
2. Blog about this giveaway or post about it on your sidebar. (1 entry)
3. Become a follower or leave a comment that you already are a follower of this blog. (1 entry)
There are three ways to enter, but you can put all three entries as one comment.
I will be using random.org to pick the winners from the comments.
This contest is only open to US and Canadian residents (Sorry!).
No P.O. Boxes.
The deadline for entry is midnight, Friday March 26th.
Good luck!
Posted by Laura's Reviews at 5:25:00 PM