Susan Higginbotham Interview, Author of The Stolen Crown (and Giveaway!) 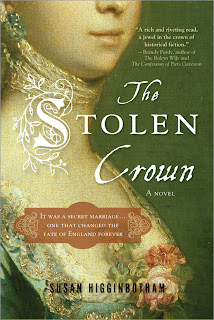 A(Susan H.) I’ve been interested in the Wars of the Roses ever since I read Shakespeare’s history plays about the era, though I didn’t begin to research the period in depth until a few years ago. It’s a hugely dramatic period, full of stories of torn loyalties, abrupt reversals of fortunes, and tragic, early deaths, as well as stories of great resilience and courage.

We know almost nothing about Katherine Woodville’s personality—one historian has suggested that she was a sloppy record-keeper, and we know that toward the end of her life, she possessed enough gumption to make an unlicensed marriage to a much younger man. But what I could find out about her life made me decide that it would be interesting to tell a novel from her point of view. Probably the youngest of the Woodville siblings, she was the one who made the greatest marriage (after her sister the queen, of course), and she would lose her father, two of her brothers, a nephew, and finally her first husband to the executioner’s ax. Her first husband, of course, is known mainly for his failed rebellion against Richard III, and though we don’t know what if any role Katherine played in his decision to turn against a king he had helped bring to the throne, it’s a tantalizing subject for speculation.

Q(Laura) Your take on Harry Stafford is different than other views of him (and I like your take better!). What made you decide to write him as a sympathetic character that truly loved his wife?

A(Susan H.) Originally, I planned to tell the novel entirely through Kate’s eyes, but Harry shoved his way in, and I’m very glad he did. No one knows why Harry rebelled against Richard III in 1483, but some chroniclers have suggested that he had a crisis of conscience, and that seemed to me to the most plausible explanation for his behavior. That in turn made him a sympathetic character in my eyes. As for his relationship with Katherine, that pretty much evolved in the course of writing the novel, but I do find it significant that during Buckingham’s rebellion, Kate accompanied her husband in his disastrous attempt to cross out of Wales and that she was with him until he made his last flight for his life.


Q(Laura) The relationship between Harry and Richard III is very complex and interesting in this novel. What inspired you to take their relationship in this direction?

A(Susan H.)Richard III is often depicted as being manipulated by Harry, but as I read more about the two men, I found this to be implausible. As Duke of Gloucester, Richard had led armies for his brother Edward IV and wielded great power in the North; nothing suggests that he was unassertive or lacking in self-confidence. Why would he allow himself to be the tool of Buckingham, a man three years his junior who had no military experience and very little administrative experience and who had never played a role of importance in English affairs? I thought that it was far more likely that it was Buckingham who would have looked up to Richard and to have been guided by his example, and their relationship took off from that starting point.

Q (Laura) I noticed in your author biography that you are an attorney. What inspired you to make a career change to an author?

A (Susan H.) I haven’t made a career change—more of a career addition! I still work full-time for a legal publishing company. My hours are flexible, however, much more so than when I had a legal practice, so that allows me to get my writing done.

Q(Laura) I've read many good reviews of both of your previous novels. Can you share some thoughts on these novels with us? Was it easier writing The Stolen Crown?

A(Susan H.) My first two novels, The Traitor’s Wife and Hugh and Bess, both deal with the Despenser family—one of the great tragic families of medieval England. I have no background in history, and I had to pretty much learn how to do historical research when I began writing The Traitor’s Wife—before that, I couldn’t have told you the difference between a primary source and a secondary source, and I had no idea of the depth of the materials from medieval England that were available.

In some ways, it was easier to write The Traitor’s Wife than my second two novels because I had no reader expectations to meet and no consciousness of an editor looking over my shoulder. From a research point of view, though, it was probably easier to write The Stolen Crown because so much has been published about the period of the Wars of the Roses and so much more primary source material is available in English. 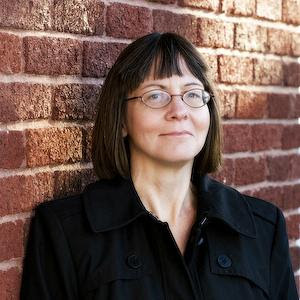 Q(Laura) What is next for you? Are you at work on a new novel that you could share with us?

A(Susan H.) I’m working on The Queen of Last Hopes, a novel about Henry VI’s queen, Margaret of Anjou, who is one of the most maligned queens in English history. She had the great misfortune to be a Frenchwoman at a time when England suffered enormous losses of its holdings in France, and she was a fiercely devoted mother who refused to sit back quietly and watch her son’s claim to the throne be set aside. She’s been portrayed as a sexually promiscuous, vengeance-mad harpy, based mainly on propaganda and gossip spread by her enemies and a good healthy dose of plain old sexism, and I’m looking forward to presenting a different fictional portrayal of her.

Q(Laura) I always love to learn who authors love to read. Can you list a few of your favorite books and authors?

A(Susan H.) My favorite novelists are Charles Dickens and Jane Austen, with Bleak House and Our Mutual Friend being in a tie for my favorite novel. I also enjoy Elizabeth Gaskell’s works. For contemporary authors, my favorites are Anne Tyler, P.D. James, and the late Barbara Pym, while in the area of historical fiction I’ve particularly enjoyed the work of Sharon Penman, Jean Plaidy, Margaret Campbell Barnes, and Brenda Clarke/ Brenda Honeyman.

Thanks, Laura, for the interview!


THE STOLEN CROWN BY SUSAN HIGGINBOTHAM—IN STORES MARCH 2010
On May Day, 1464, six-year-old Katherine Woodville, daughter of a duchess who has married a knight of modest means, awakes to find her gorgeous older sister, Elizabeth, in the midst of a secret marriage to King Edward IV. It changes everything—for Kate and for England.
Then King Edward dies unexpectedly. Richard III, Duke of Gloucester, is named protector of Edward and Elizabeth's two young princes, but Richard's own ambitions for the crown interfere with his duties...
Lancastrians against Yorkists: greed, power, murder, and war. As the story unfolds through the unique perspective of Kate Woodville, it soon becomes apparent that not everyone is wholly evil—or wholly good.
ABOUT THE AUTHOR
Susan Higginbotham is the author of two historical fiction novels. The Traitor’s Wife, her first novel, is the winner of ForeWord Magazine’s 2005 Silver Award for historical fiction and is a Gold Medalist, Historical/Military Fiction, 2008 Independent Publisher Book Awards. She writes her own historical fiction blog, Medieval Woman. Higginbotham has worked as an editor and an attorney, and lives in North Carolina with her family. For more information, please visit http://www.susanhigginbotham.com/
Giveaway Details
Danielle of Sourcebooks has been kind enough to offer two copies of the The Stolen Crown by Susan Higginbotham for this giveaway. If you would like to enter this contest do any of the following:
1. Leave a comment on this post. You must include an email address. If I can't find a way to contact you I will draw another winner. (1 entry)
2. Blog about this giveaway or post about it on your sidebar. (1 entry)
3. Become a follower or leave a comment that you already are a follower of this blog. (1 entry)
There are three ways to enter, but you can put all three entries as one comment.
I will be using random.org to pick the winners from the comments.
This contest is only open to US and Canadian residents (Sorry!).
No P.O. Boxes.
The deadline for entry is midnight, Friday April 2nd.
Good luck!
Posted by Laura's Reviews at 7:07:00 PM