Interview with William Deresiewicz, author of A Jane Austen Education 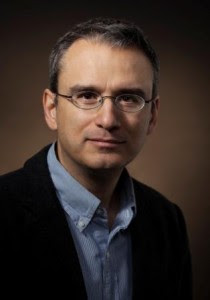 I recently read (and loved!) A Jane Austen Education: How Six Novels Taught Me About Love, Friendship, and the Things that Really Matter by William Deresiewicz. I am very excited that author William Deresiewicz agreed to an interview to answer my questions about this great book and his writing process. Who wouldn't want to learn more about a man who loves Jane Austen?

LAG: My husband loves to talk about how he loves War and Peace and other classic novels, but if I mention Jane Austen or heaven forbid, watch a movie production of one of her novels, he quickly flees to another room. Do you have any man to man advice on why he should give Jane Austen a chance?

WD: Well, I think she can make you happy, because she can teach you things that will help you know yourself and get along better with the people around you. And she will certainly teach you things that will help you understand the women in your life better, which will make everybody happy. But forget about all that take-your-medicine stuff. She's fun! She's funny! She's a great storyteller! Don't judge from the movies: you have to read the books.

LAG: I love how A Jane Austen Education is at once a literary critique of Austen's novels as well as life lessons on what you learned from them personally. How did you come up with this unique format?

WD: The book came out of the moment in a job interview when I was challenged about why Jane Austen was so important to me and I said, "I don't know, sometimes I just feel like everything I know about life I learned by reading Jane Austen." Once I started to write the book, I realized that the only way to talk about what I have learned was to talk about how I had learned it. There's no separating, for me, the lessons she taught me and the particular impact they had on my life. She's a very personal author, which is why people take her so personally. 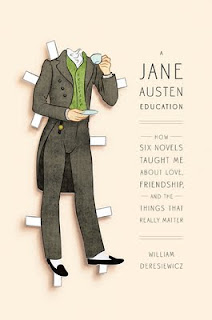 LAG: How many times have you read Austen's novels? Have you read any of the variations / continuations? Are you a secret Pride and Prejudice and Zombies fan?

WD: I've lost count. At least five times each and many more for Pride and Prejudice. Also I wrote a chapter of my dissertation about her and then a completely separate academic book, so it's not even a matter of reading, at that point. It's more like going over every line with a magnifying glass. But I have to say I haven't looked at any of the fan fiction, and I definitely don't think the zombies thing is for me. But anything that brings people to her books, including the movies, is doing something valuable as far as I'm concerned.

LAG: Is your dissertation a published work? It sounded very interesting.

WD: The dissertation was never published as a whole, but I did publish an academic article based on the Austen chapter (and others from the other chapters). Here's the reference: "Community and Cognition in Pride and Prejudice," ELH 64 (Summer 1997). And as I said, I then wrote an entire book, Jane Austen and the Romantic Poets (Columbia, 2004). It's about how the three novels she wrote from scratch as an adult in her late 30s are different in many important ways from the three she drafted as a young woman in her early 20s, and how the English Romantic poets, especially Wordsworth, helped lead her to her deeper understandings of time, memory, loss, and many other things.

LAG: What were the 100 books you had to read for your graduate degree? Having to push your way through them in so short a time, did you enjoy them?

WD: I still have the lists, which I'm going to put at the end of this interview. There was also some secondary material, which is how it added up to (about) 100. I should say that "summer" meant about five months, from the beginning of May to the middle of October, when I actually took the exams. And no, of course there wasn't the kind of time I would have liked to savor the books, though you do learn to absorb things very quickly in graduate school. It gave me an overview, which allowed me to go back and reread the things that had turned out to be the most important to me, like Jane Austen and George Eliot.

LAG: As a literary critic, what do you think about the blogging world? Where can we look for some of your critical takes on literature?

WD: I think literary blogs can be a really good thing, if they're done thoughtfully. It's great that readers can now have public conversations with one another--a terrific thing for book culture. I've written myself more than once against the notion that literary criticism, literary conversation, belongs only to the experts, professors and professional critics. (Here are a couple of those essays: http://www.thenation.com/article/seeing-past-ivy-do-literary-mandarins-put-reading-risk
http://www.slate.com/id/2288626/) As for my own reviews, they appear in The Nation, The New Republic, Slate, and other places, but they can all be accessed through my website, http://www.billderesiewicz.com/, as can the essays I write about higher education, technology culture, and other things, as well as All Points, my new weekly blog on cultural issues for the American Scholar.

LAG: How do you write a book with personal stories about your friends, loves, and family in it for the world to see? Are you afraid some of your friends will figure out they are in the book?
WD: It was definitely tough. Believe it or not, I'm kind of a private person, and this kind of confession didn't come easily. Also, I think there was a certain element of denial. You sit alone in a room when you write, and sometimes it's hard to realize that lots of people are going to read it. Now, of course, it's all becoming real. As for my friends, especially the ones I talk about in a negative way, yes, I'm afraid. But then, those people aren't my friends anymore, for the exact reasons I talk about in the book. The others, the ones I say good things about and still love and am friends with, I'm excited for them to see it. In fact, I just got a wonderful note from the friend I describe as having known me better than I knew myself. She told me that the book means a lot to her, and that's really gratifying.

LAG: What are you currently working on? Any new projects in the works? I really enjoyed this book and would love to read more of your work.


WD: Thank you! My next book is pretty different. It's about the problems of elite college education. If the Jane Austen book came out of my experiences in graduate school, this one is coming from what I saw in my 10 years as a professor at Yale. I've already been doing a lot of writing about this--you can see that on the essays page on my website--and getting a lot of really passionate feedback from students and recent graduates. Now I want to put it all together in a book. But even though the subjects and approaches are different, in many ways the two projects share a lot. It was Jane Austen who first began to teach me to question the elite background I grew up in, the assumptions of that world in terms of what it means to be a valuable person. That was the beginning of a journey that I'm still on.

LAG: That sounds like a book I would like to read, especially after reading A Jane Austen Education. Thank-you for this interview!

From War to War
In England
Woolf, Virginia Mrs. Dalloway
To the Lighthouse
The Waves
Between the Acts
Forster, E.M. A Passage to India
Huxley, Aldous Brave New World
Waugh, Evelyn Decline and Fall
Black Mischief
A Handful of Dust
The Loved One

In Paris
Joyce, James A Portrait of the Artist as a Young Man
Ulysses
Hemingway, Ernest In Our Time
Stein, Gertude The Autobiography of Alice B. Toklas
Barnes, Djuna Nightwood
Nabokov, Vladimir The Real Life of Sebastian Knight
Miller, Henry Tropic of Capricorn
Beckett, Samuel Watt

In America
Fitzgerald, F. Scott The Great Gatsby
Faulkner, William The Sound and the Fury
West, Nathaniel The Day of the Locust

In Austria and Germany
Kafka, Franz The Metamorphosis
The Castle
Mann, Thomas Death in Venice
The Magic Mountain

Ancillary Field I: English Fiction to Modernism
(with emphasis on the comic)

Goldsmith, Oliver The Vicar of Wakefield

Eliot, George Adam Bede
The Mill on the Floss
Middlemarch