Tangled Webs: How False Statements are Undermining America: From Martha Stewart to Bernie Madoff by James B. Stewart 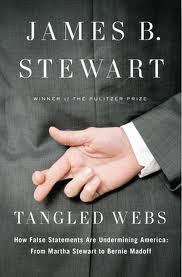 It has been in the news repeatedly for the last decade, famous or in some cases, infamous members of our society lying under oath to protect themselves. Perjury has become an epidemic in this country and James B. Stewart writes about four case studies of this phenomenon in his powerful new book, Tangled Webs. These case studies include Martha Stewart, I. Lewis “Scooter” Libby, Barry Bonds, and Bernie Madoff. All of these cases shaped us as a nation over the past decade.

Each of these famous people could have taken Mark Twain’s advice, “If you tell the truth you don't have to remember anything.” By not telling the truth, they basically made things worse for themselves and badly affected a number of people. As Stewart states in the introduction, “This surge of perjury cases at the highest level of business, politics, media, and culture poses some fundamental questions: Why would people with so much to lose put so much at risk by lying under oath? Whatever they may have done, why would they compound their problems by committing an independent felony, punishable by prison? What were the consequences? And what price are all of us paying for their behavior?”

I enjoyed how Tangled Webs gave me a much better understanding of major events that have been in the news and what affects perjury has on our legal system. I’m going to break my discussion of the book down by each section of the book.

Martha Stewart
Martha Stewart is definitely not shown in a positive light in Tangled Webs. She is a powerful business woman who made matters much worse for herself through perjury when asked about sales of some of her stock. I’m glad that she was prosecuted for lying under oath, but I was also disturbed that the “little people” that were part of the case were hurt much more than her.

Scooter Libby
After reading this section, I actually felt kind of sorry for Scooter Libby. Libby had a lot of stuff going on and it would be hard to remember. Overall though it seemed like he decided on a story and stuck with it even when it was proved wrong. I just wanted to reach through the pages of the book, grab him and yell – “just tell the truth!” As Special Prosecutor Fitzgerald stated at the trial, “Having a bad memory is not a crime. . . Something important needed to be investigated: Whether the laws protecting covert agents and classified agents have been broken. And to do that on behalf of the citizens, the FBI and the grand jury needed the truth . . . The defendant obstructed that search for the truth.” 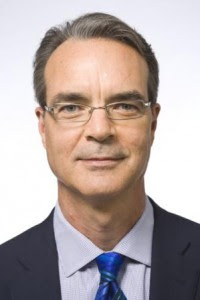 I thought this quote was great also: “Perhaps the greatest irony is that Libby leaked Plame’s identity and mounted a sophisticated campaign to refute what he believed were falsehoods leveled by Joseph Wilson. Libby insisted that all he and the vice president ever wanted was to get the truth out. And then he himself lied, repeatedly and under oath.”

I also loved this: “Still in the end Bush spared Libby a prison sentence, just as he failed to take any action against Rove or Armitage. The message seemed inescapable that in the Bush White house, loyalty trumped truth.” (Rove and Armitage were the actual leaks.)

“The bar for service at the highest levels of government should not be so low that it excludes only those who commit crimes that can be proved beyond a reasonable doubt. Bush should have fired Rove as soon as his role in the leaks became clear . . . Bush’s failure to do so after saying he’d fire anyone involved in the leak exposed rank hypocrisy to the highest level. . . In light of this story spectacle, could anyone be blamed for being cynical about the integrity of government officials?”

While I read this section, I was disturbed at how much time government officials are obsessed with the news and what is being said about them.

This section of the book was very long, and complicated. It had a great wrap-up section, and I enjoyed learning the details of the case, but I thought overall it dragged a bit.

Barry Bonds
Barry Bonds is not a very nice guy. He was a good baseball player, but he wanted to be the best and so he took drugs in order to get to that level . . . and then lied about it. I was disturbed about the prevalence of drugging in sports and how doctors/scientists work to thwart drug tests. I had no idea it was so widespread.
I don’t know why, but I thought this quote was funny from this section, “Despite being an illegal drug dealer and an illegal immigrant, Heredia was a godsend to the government.”

Bernie Madoff
In the entire Bernie Madoff section I was repeatedly amazed by the incompetence of the SEC. It definitely did not give me much confidence in that agency or the financial markets as a whole. I also was angry by the end of the section that after all of Madoff’s lies, his wife was able to get a bargain for 2.5 million from the government while so many investors were left with nothing. I’m usually not a cruel person, but I wanted all of her money taken away. It was all ill gotten gains.

Stewart’s conclusions at the end of Tangled Webs were excellent. “False statements have a direct, immediate, and often devastating impact, not only on those who make them but on those closest to them, their friends and families; on their colleagues, allies and supporters; on all who rely on their word; on the ideals of fair play, integrity, and trust to which the people of goodwill everywhere aspire; and ultimately to the very moral fabric of the society in which we live.”

“Ultimately, the reason why people at the pinnacle of their careers – respected, acclaimed role models like Martha Stewart, Scooter Libby, Barry Bonds, and Bernard Madoff – committed the crimes of perjury and false statements seems only too obvious: they thought they could get away with it.”

Overall, I really enjoyed Tangled Webs. It was a good, meaty book that really got me thinking about current events and perjury in general. I came away from the book feeling like I had learned a great deal. It had excellent writing. I only got a little dragged down in the Libby section, but I also thought it was the most interesting section so it is a give and take.

This review is part of the TLC book tours. For a listing of all of the other tour stops for this book, please check out this link. 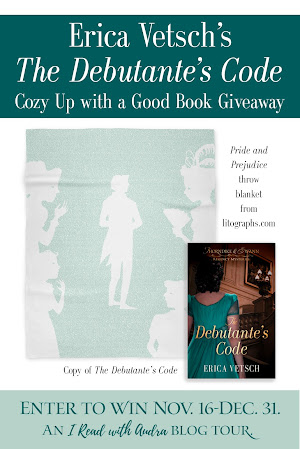 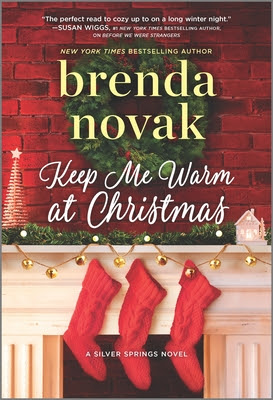 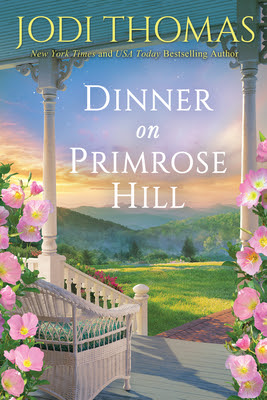 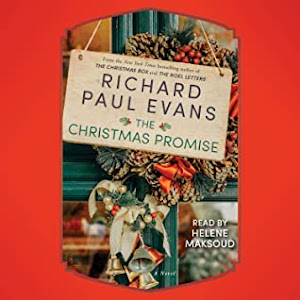