The Disappearing Spoon and Other True Tales of Madness, Love, and the History of the World from the Periodic Table of Elements by Sam Kean 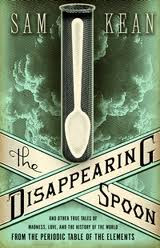 I am a nerd and I love science and engineering. The Disappearing Spoon satisfied the nerd within by explaining how the periodic table of elements was created and all of the strange, odd, and fascinating stories behind that creation and the discovery of the elements.

I really loved the stories which included fascinating stories about Louis (yes, the acid/base Lewis), Nobel Prize winners, Silicon Valley, elements during warfare, etc. The stories were unique and intriguing, such as the Colorado mine that was overtaken by Germans during WWI. At other times, sometimes I was bored by too much chemical detail. I think this was due to the fact that I was listening to the book instead of reading it while staring at a periodic table.

I listened to the Tantor Media version of the book narrated by Sean Runnette. He did a good job as a reader, but I will admit to being bored at times, especially during some of the heavy chemical sections. They weren’t that fun to listen to, but the stories more than made up for it. I think if I “read” this book again, I will skip the audiobook and read the physical book.

Overall, The Disappearing Spoon was a unique, intriguing look into the periodic table and the fascinating elements the compromise it. And it definitely has one of the best titles for a book that I have ever seen!

This is my sixth item for the Audiobook Challenge.