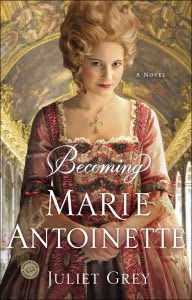 Maria Antonia is the youngest daughter of Empress Maria Theresa of Austria’s sixteen children. Maria Theresa is a powerful figure and has determined to use her numerous children to make advantageous marriages to maintain peace in Austria. Due to her age, Antonia is chosen to marry the Dauphin of France. It takes awhile to totally convince the King of France of this idea and Antonia is forced to go through a total make over, including braces on her teeth (painful!), and changes to her hair, clothes, and education. Finally Antonia is formally engaged, married by proxy, and then married in France. Unfortunately, her new husband is more interested in hunting, eating, and making locks then he is in consummating the marriage. Now known as Marie Antoinette, she is forced to make her way through the treachery of the politics at Versailles and slowly finds herself falling in love with her husband.
Becoming Marie Antoinette is a straightforward look at Marie Antoinette’s rise to power. It’s a little sad at how optimistic both her and Louis are as they become the King and Queen of France knowing how it will all end. I’m very interested though on how this trilogy will continue in the future!

I like how this novel was a look at the early years of Marie Antoinette. So much is focused on the scandal and tragedy of her later years that it is almost forgotten that she was the daughter of such a powerful monarch. I would love to read a book on Empress Maria Theresa! She also had an interesting story about when a young Herr Mozart came to play at court when she was a child.

I was disturbed that she was forced to wear braces. I didn’t even know they had them at that point in time. It must have been so painful! I also thought it was strange with such a powerful mother that she neglected her daughters’ education so much. It makes one wonder if Marie Antoinette would have received a better education if it would have helped her out later in life.

I must say I was disturbed by one thing the most . . . that people were allowed freely go to the bathroom all over Versailles not in chamber pots. I can’t imagine how that must have smelled. That is terrible!!

I read this book as part of TLC Book Tours. The rest of the stops are at listed here.

Becoming Marie Antoinette is my seventeenth book in the Historical Fiction Reading Challenge 2011.

Giveaway Details
Random House is going to send one lucky winner a copy of Becoming Marie Antoinette by Juliet Grey.

If you would like to win a copy of Becoming Marie Antoinette please leave a comment about what intrigues you about the novel.

The deadline for entry is midnight, Friday September 2nd.