America’s Love Affair with Ireland by Jeanette Baker (and GIVEAWAY!) 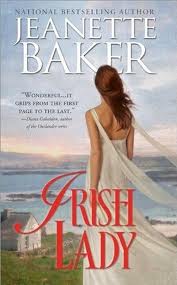 When people think of Ireland, they call up images of rolling hills with hedges separating a patchwork of fields in various shades of green, thick mists, silver lakes, thatched cottages with peat smoke escaping from chimneys, twisting one-lane roads, friendly pubs, men in caps offering pints all around, women who drink tea in china cups with saucers, bland food and mile after mile of emptiness.


I, too, love the green and gray (well maybe not so much the gray) the boiling clouds, the sudden showers followed by glimpses of a reluctant sun. I love the people, the culture, the music, the literature and the food, particularly the desserts, specifically banoffee pie, a combination of rich toffee, bananas and cream.

Coming back to Ireland after visiting other countries is like coming home to a place where conversation is more important than the clock, where directions have nothing to do with logic and where afternoon tea isn't complete without homemade brown bread, butter and wild blackberry jam. The people, sturdy, blue-eyed and freckled, look familiar. That's not terribly surprising considering that fifty million Americans claim Irish roots. This charming, romanticized view of The Emerald Isle can still be found in small villages. This is the tourists’ Ireland. This is the Ireland you’ll experience if you decide to visit for a week or two. That’s why you love it. Who wouldn’t?


Then there is the language. It is the charm of the syllables, Martara, Ballylongford, Tullahennell, and all the other lovely names that are lost to those of us who live in an America with zip codes and five digit addresses. Americans are intrigued with accents, especially accents associated with English speakers from the British Isles, instinctively believing the speaker has more legitimacy, sounds more intelligent, is somehow worthier of attention than one who hails from within their own borders. Villages like Ballylongford, Killarney, Dingle, BallyMcCelligot, Caheersaveen, Ballybunion, Kilflyn, Kilorglin, Kilronen, Skibbereen slip off the tongues of tourists with the same lilt found in the brogues of locals. The assigning of names like Noreen (little Nora), Pat Joe (Patrick, son of Joseph), Johnny Christmas (John who visits on Christmas Day), Micky Pa (Michael, son of Patrick), Cissy Bon (Christina with the blonde hair) is as welcome and unusual to the American as bacon and cabbage for Sunday dinner.

Maybe it has to do with the Anglo/Irish roots of American literature. Who can argue with Shakespeare, Yeats, Joyce and Dunne? Perhaps it’s the call of their DNA memory. The United States is, after all, a country initially settled by the British and their nearby colonies. All of their presidents have English/Irish/Scottish ancestry. Even President Obama’s late mother traces her roots to Moneygall.

My Ireland, the native’s Ireland, the real Ireland of the European Union, is quite different. My Ireland is crowded, so crowded that traffic clogs up the roads leading into the villages and modern, multi-lane bypasses alleviate the congestion around the towns and cities. Most of the population is under thirty-five and men rarely wear caps. They drink carefully because of no-tolerance laws and because education and prosperity have given them opportunity unheard of by previous generations. The food is delicious and varied, although expensive by American standards, and because of the water, the coffee has a delicious smoky flavor without the slightest hint of bitterness. Corned beef isn’t common, but bacon and cabbage is, a kind of bacon that bears no resemblance to the thin, crispy, fat-layered bacon Americans order with eggs and pancakes. Irish bacon is back bacon, lean, tender and flavorful.

Cleanup isn’t the stream-lined affair American’s are accustomed to. Garbage disposals don’t exist and trash disposal is a problem, so much so that if you don’t bring a bag to the grocery store you’ll have to fork over a significant amount of change to purchase a store bag. Buildings are not temperature controlled, automatic transmission is unusual and clothes’ dryers are considered a luxury despite the inconvenience of daily rain. Coffee and soft drinks are not automatically refilled at restaurants and the bill for a meal for a family of four still causes me to catch my breath in disbelief. Unemployment and a generational reliance on the dole are embarrassingly high by American standards.

None of the above really matters to visitors, of course. It’s enough to settle back with a cup of strong tea, a slice of soda bread and a long afternoon ahead. Listening to a native Irish speaker wax on over politics, Irish football, or even the weather is pure entertainment. Despite its interminable economic difficulties, its graft-ridden local officials and the endless, miserable gray of its skies, there is still something romantic about a country that refuses to organize itself into postal codes. That, and the loveliest scenery in the world, The Ring of Kerry, The Cliffs of Moher, Dun Aengus Fort on the Aran Island of Inishmore, The Gap of Dunloe, Newgrange, the tiny pubs, the traditional music and the honest appreciation for America and the enjoyment of its visitors, continue to draw tourists year after year.

Thank-you Jeanette for this wonderful guest blog.  I have always had a love for Ireland and a dream of visiting there one day.  This blog makes me want to jump on a plane today!

Jeanette Baker is the author of the new novel out from Sourcebooks entitled Irish Lady.

Description of Irish Lady from Sourcebooks:
"A fiercely emotional and romantic tale. Jeanette Baker has a rare gift which allows her to blend genres with gracious ease."

A successful attorney in a posh London neighborhood, Meghann McCarthy thought she'd escaped the slums of Belfast forever. Until Michael Devlin needs her help. Years before, her love for the Irish charmer had nearly torn her apart, but now he's part of a past she never wants to revisit. However, she can't leave him defenseless against a murder charge—even if uncovering the truth puts her life in danger too.

She'll risk everything to save Michael—and she's not the first of her family to put it all on the line for a man she loves. As Meghann delves further into Michael's case, further into the history that binds them so irrevocably, she slips into the unfolding drama of centuries before...of another woman's desperate fight to free her rebel husband from the clutches of Queen Elizabeth. Stakes are high, but the reward is the love of a lifetime. And the Irish never give up.


Sourcebooks has graciously offered a giveaway of one copy of Irish Lady by Jeanette Baker.

If you would like to win a copy of this book please leave a comment about what intrigues you about the this book or this great guest blog by Jeanette Baker.

The deadline for entry is midnight, Friday January 27, 2012.