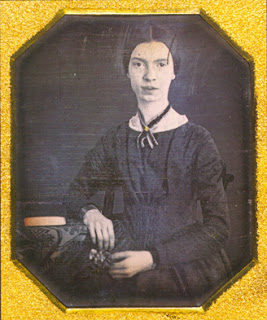 I am honored to have Cynthia Dickinson as a guest blogger today to give a brief biography of Emily Dickinson.  Cynthia (no relation to Emily) works at The Emily Dickinson Museum.  I love what she has to say about the Museum and her pictures - it looks like another place I need to add on to my places to visit in the future list!  Thank-you Cynthia for the great post!

Emily Dickinson is considered one of the greatest poets of all time, yet in her own lifetime her work—virtually all unpublished--was known only to a small circle of family and friends.   Dickinson is famous now as a recluse, yet her lively childhood and youth were filled with schooling, reading, explorations of nature, religious activities, significant friendships, and important encounters with poetry.


The Emily Dickinson Museum is dedicated to helping visitors fully understand Emily Dickinson’s remarkable story and to untangle some of the myths that surround her and her work.  Located in Amherst, Massachusetts, the Museum consists of Dickinson’s family home, the Homestead, and the home next door of her brother Austin.


On this day of her death, here is a short introduction to the life and work of one of America’s creative geniuses. 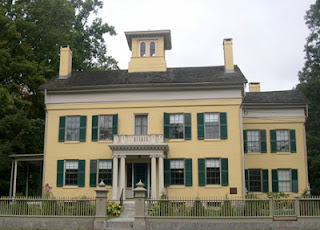 Emily Dickinson was born on December 10, 1830, in the family Homestead on Main Street in Amherst, Massachusetts.  When Emily was 9, she and her family (which also included older brother Austin and younger sister Lavinia) moved to a house on what is now North Pleasant Street in Amherst.  The family returned to the Homestead in 1855.  Emily, who, like Lavinia, never married, lived at the Homestead until her death on May 15, 1886.

The poet’s formal schooling was exceptional for girls in the early nineteenth century, though not unusual for girls in Amherst.  She attended the co-educational Amherst Academy for about seven years before entering Mount Holyoke Female Seminary (now Mount Holyoke College) in South Hadley, Massachusetts, in 1847.  She attended the Seminary for one year, the longest time she spent away from home.


In Dickinson's early twenties, writing became increasingly important to her.  In a letter to Austin that took him to task for writing poetry, she reveals something more significant about herself:   "I’ve been in the habit myself of writing some few things, and it rather appears to me that you’re getting away my patent, so you’d better be somewhat careful, or I’ll call the police!”  (L110)

Dickinson's letters to her brother also reveal a growing sense of "difference" between herself and others:  “What makes a few of us so different from others?  It’s a question I often ask myself” (L 118).  This sense of distinction became more pronounced as she grew older and as her poetic sensibilities matured.


Although Emily Dickinson's calling as a poet began in her teen years, she came into her own as an artist during a short but intense period of creativity that resulted in her composing, revising, and saving hundreds of poems.  That period, which scholars identify as 1858-1865, overlaps with the most significant event of American nineteenth-century history, the Civil War.


During this time, Dickinson's personal life also underwent tremendous change. In the  mid-1850s, Emily Dickinson had moved with her family back to the Homestead, and her brother Austin had married and moved with his wife Susan (a dear friend of Emily’s) into a new house next door.  The couple named their house “The Evergreens.”  It quickly became a center for social and intellectual gatherings in Amherst. 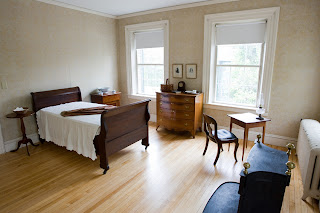 Back at the Homestead, Emily Dickinson began to devote more time to her writing.  She did much of this work in her bedroom, the southwest corner room on the second floor.  By the time Dickinson turned 35, she had composed more than 1100 concise, powerful lyrics that astutely examine pain, grief, joy, love, nature, and art.  She once defined poetry this way:  “If I read a book and it makes my whole body so cold no fire can warm me I know that is poetry.  If I feel physically as if the top of my head were taken off, I know that is poetry.  These are the only way I know it.  Is there any other way?” (L342a) http://www.emilydickinsonmuseum.org/about_writings

Dickinson shared a portion of her poems with family and selected friends whose literary taste she admired, and a few of her poems were published in newspapers, though anonymously and apparently without her prior consent.  But the vast majority of her work remained known only to its author.  Many of these are recorded in small handmade booklets (now called “fascicles”), very private “publications” that she shared with no one.

Dickinson's later life was marked by illness and death, including her father's, her mother’s, and her young nephew Gib’s.  The poet herself became ill shortly after Gib died:  "The Crisis of the sorrow of so many years is all that tires me" (L873).  She remained in poor health until she died at age 55 on May 15, 1886.  She was buried four days later in the town cemetery, now known as West Cemetery.

Each year the Emily Dickinson marks the anniversary of Dickinson’s death on the Saturday closest to that date with a Poetry Walk.  This year’s walk was an especially creative celebration of the “aliveness” of her verse. The walk marked the opening of a new exhibit on the Museum grounds:  “The Little White House Project.”  http://www.emilydickinsonmuseum.org/littlewhitehouseproject

The Emily Dickinson Museum is open to the public from March through December each year and offers well-regarded guided tours of the Homestead and The Evergreens as well as a variety of public programs http://www.emilydickinsonmuseum.org/.  We hope you’ll explore our website and make your own pilgrimage to Amherst to discover more about one of the world’s greatest poets.
Posted by Laura's Reviews at 11:16:00 PM